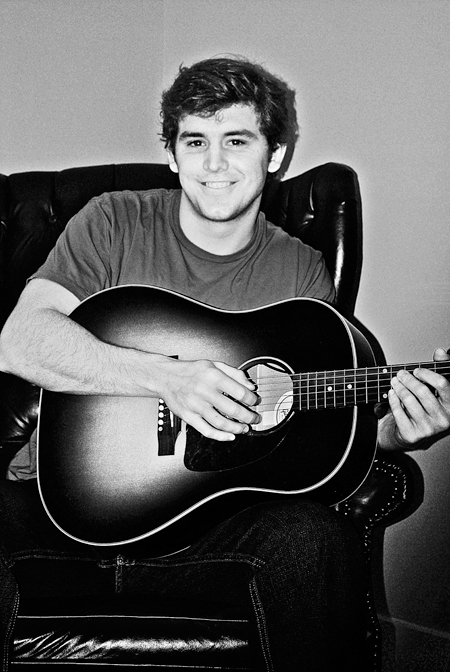 Cameron, you live in Belmont, North Carolina, and Brandon lives in Nashville. How did the two of you meet?

Well, I’m actually still in college. I’m a civil engineer student at Clemson University, in South Carolina, and a lot of engineering students do what they call a “co-op.” It’s like an internship where you go work for a company. It went along with my interest in songwriting, and there was a company that had an office in Nashville, and I got to go work with them for a little while. I was working at a construction company during the day, and doing songwriter things at night. I met him through all that.

Where did you guys come up with the idea for “The House?”

My dad and I were on a motorcycle trip to Niagara Falls last summer, and we were in a hotel somewhere one night between here and there – probably somewhere in upstate New York – and and I was just thinking about it. I came up with the line, “Watch your home turn back into a house.” I was lying there in bed and I came up with a melody and chorus, and I probably had the song over halfway done. I messed with it here and there, and then it kind of died off for probably two months. The first time me and Brandon wrote together, he was looking through his book and I was looking through mine – he calls it a “hook book” – and I said I had this idea. He liked it, so we started working on it, and probably got together two more times ‘till we finished it.

Do you play around Clemson when you’re there?

How did you get started as a songwriter?

Well, I was in this relationship with this girl for a long time, and it ended. It had been done for a little while, but I came home one day and I found this four page letter in my mailbox. I was like, “Man, that sounds like a country song.” And then I thought, “I’m going to write it before I read it.” So I sat down and wrote the song. I finished it in 30 minutes, and was really happy with it. Then I read the letter. That was kind of how my songwriting got started.

Eric Church is a huge inspiration for me and Brandon. He is single-handedly responsible for sending all the 20-year-old dudes to Capitol Nashville. I was a big fan when his first CD came out, just because of the writing on it, and it was the same for Brandon. Brandon says that same thing, that he loves his music and how authentic it was and that kind of stuff. It just kind of got started one day, and finding artists that I like like Jamey Johnson and guys like that kind of kept it going and kept it in the right direction.