Shelter is one of our few physical needs as humans; we all know that we can’t live without the basics of food, water, and shelter. But the concept of shelter can also take on a more abstract meaning. Shelter can come in the form of refuge from danger, a haven from worry, a comforting oasis in a desert of distress.

“Gimme Shelter” by the Rolling Stones was released on December 5, 1969, and remains one of the most recognizable songs from the rock band’s catalog. The song runs at four minutes and 37 seconds—a perfect length for a rock anthem of this caliber—and leans into the wailings of Mick Jagger accompanied by unique elements of the maracas and harmonica.

The song was written by Jagger and Keith Richards, one of music’s most successful songwriting partnerships, similar to that of the Lennon-McCartney partnership. The song itself was never released as a single, which means that it never had the opportunity to chart as one. It was, however, the opening track for the Stones’ record Let It Bleed which charted as the number one album in the U.K. and number three in the U.S.

Richards first began working on “Gimme Shelter” in London while Jagger was away filming Performance, a 1970 British crime/drama movie. The kicker was that at the time, Richards was romantically involved with Anita Pallenberg, Jagger’s co-star and love interest for Performance. While not much else can be concluded about Jagger’s time with Pallenberg, Richards did take to watching the rain during this period of his life.

“I had been sitting by the window of my friend Robert Fraser’s apartment on Mount Street in London with an acoustic guitar when suddenly the sky went completely black and an incredible monsoon came down. It was just people running about looking for shelter—that was the germ of the idea [for ‘Gimme Shelter’],” Richards told Harper’s Bazaar. “We went further into it until it became, you know, rape and murder are ‘just a shot away.’”

The lyrics of “Gimme Shelter” convey a pretty bleak outlook on the world compared to the song’s rhythmic core.

Ooh, see the fire is sweepin’
Our streets today
Burns like a red coal carpet
Mad bull lost its way

When Jagger was asked about the harshness of the lyrics, and the broader Let It Bleed album as a whole, the rocker pointed to the Vietnam War (1955-1975). In a 1995 interview with Rolling Stone, he explained that the band was undoubtedly impacted by the Vietnam War when creating songs like “Gimme Shelter.”

Hence, the desperate and dark cries in fear of war, rape, and murder. “[‘Gimme Shelter’ is] a kind of end-of-the-world song, really. It’s apocalypse; the whole record’s like that,” Jagger confirmed.

The female vocals and vocalist.

As we’re sure you’ve noticed, Jagger isn’t the only one singing vocals on “Gimme Shelter.” In fact, there’s a beautifully haunting female vocalist on the track who reaches notes just a little higher than Jagger’s.

The guest vocalist on the track is soul and gospel singer Merry Clayton.

“We randomly phoned up this poor lady [Merry Clayton] in the middle of the night, and she arrived in her curlers and proceeded to do that in one or two takes, which is pretty amazing. She came in and knocked off this rather odd lyric. It’s not the sort of lyric you give everyone — Rape, murder / It’s just a shot away — but she really got into it, as you can hear on the record. She joins the chorus. It’s been a great live song ever since,” Jaggar told NPR in 2012.

Clayton’s part on “Gimme Shelter” solidified the song as one of the greatest rock anthems of the ’60s. Her emotive, near-screaming vocals added a layer to the track that the Stones simply couldn’t provide themselves.

Despite the song’s renown, however, “Gimme Shelter” brings back gloomy memories for Clayton. She was pregnant at the time of recording, and according to reports after the fact, the physical demands of the duet led to a miscarriage for the singer. Later, after “Gimme Shelter,” Clayton would go on to collaborate with other artists like Neil Young and Coldplay and eventually release her own music.

On December 6, 1970, just a day past “Gimme Shelter”’s one-year anniversary, The Rolling Stones released their documentary of the same name. Directed by Albert and David Maysles and Charlotte Zwerin, the film follows the band on the last few weeks of the Stones’ 1969 U.S. Tour. Gimme Shelter also touches on the calamitous Altamont Free Concert in 1969.

Overall, Gimme Shelter the film has garnered critical acclaim for its honest depiction of the counterculture emergence in the 1960s and 1970s.

Can there be a happy ending?

In short, yes. The 1969 song does leave Stones fans and listeners with a little bit of hope. The closing verse, sung by both Jagger and Clayton, promises that love is just as possible as war.

I tell you love, sister
It’s just a kiss away

Here’s to hoping that love prevails more often than not. 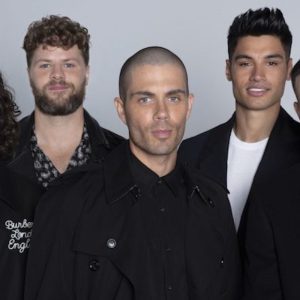