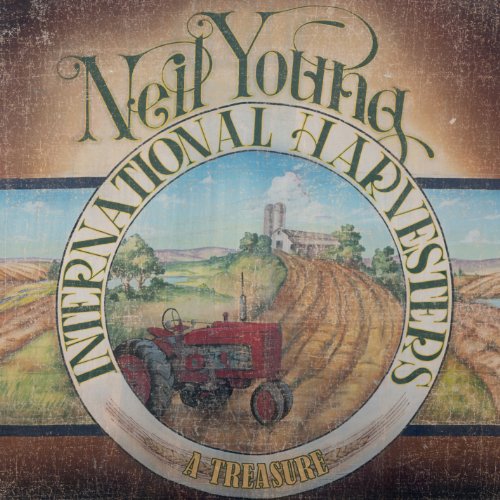 You get the sense listening to A Treasure, the latest edition in The Neil Young Archives Performance Series, that you are standing outside the artist’s mountain top home eavesdropping on an important chapter of his life. If you listen closely, you can almost hear the yellowed pages crackle in a forgotten scrapbook, making you a silent witness to memories resurrected, feelings remembered, pain re-imagined, pet peeves aired.

A Treasure was recorded over two fall tours in 1984 and 1985 with the International Harvesters (which include the late Ben Keith on steel and slide guitar, Spooner Oldham and Hargus “Pig” Robbins on piano, and Anthony Crawford on guitar and mandolin) during a professional and artistic upheaval when the musician was sued by his then-record company Geffen Records for $3.3 million dollars after submitting the country-esque Old Ways. The label claimed that this record and its predecessor Everybody’s Rockin’ were “not commercial” and “musically uncharacteristic of [Young’s] previous recordings.”

Not surprisingly, Young immediately countersued for $21 million alleging breach of contract, since he was reportedly promised that he had an artistic free reign from the label when he signed. The suit turned out to be a huge misstep, with label head David Geffen famously apologizing to the musician. But while Young appeared to accept the decision with great grace and went on to record two more albums for Geffen – the almost jettisoned Old Ways and 1986’s Landing On Water – his songs say something else entirely, beginning with the raw-boned taunt of “Are You Ready For The Country,” which finds him still flogging his label for rejecting a record they claimed was “too country.” You can hear similar menace in his voice on the little heard “Grey Riders,” which makes its first recorded appearance here. The title is undoubtedly code for this band of musical marauders who weren’t about to take that affront lying down and staged their own counter-revolution to the sound of slashing guitars, anxious drum beats, and howling dogs that rival the threat and the genius of “Cortez The Killer.”

This same crew of musicians have shown up on some of Young’s more pacific, bucolic ventures like Harvest, Comes A Time, Harvest Moon, Silver And Gold and 2005’s Prairie Wind, but there is little of that nostalgic gentle spirit here. Nostalgic, sure, but these spirits are more malevolent. In fact this could almost pass as a Crazy Horse album if it wasn’t for the deceptively languid playing: The gentle acoustics of Keith’s steel pedal, the soft whine of a fiddle, the waltz time signatures conceal a darker cast at the heart of the album. Burrowed under the perfect old timey harmonics are tales of opportunities missed on “It Might Have Been,” hearts broken on “Let Your Fingers Do The Walking” and cars that he has loved and lost on “Motor City,” written during the Buy America movement, where Young patriotically huffs: “My old car keeps breakin’ down/My new car ain’t from Japan/There’s already too many Toyotas in this town.” Continuing his rant in the next verse – “Another thing that’s buggin’ me/Is this commercial on TV/Says that Detroit can’t make good cars anymore” – proving once again that in a Youngian Universe the personal is always political, but even more that the political is very personal, something he amplifies clearly with the seething anger that underpins “Southern Pacific.”

But despite the bleakness there is something transformative in the pain, best expressed on “Flying On The Ground Is Wrong” that begs the question, does breakdown always precede breakthrough? Here it certainly does, as he laments: “City lights at a country fair/Never shine but always glare/If I’m bright enough to see you/You’re just too dark to care.” It’s interesting that most of the songs are narrative and observational, sagas set in a different time, in an imagined West – with the exception of “Amber Jean” written for his then-infant daughter, and “Get Back To The Country,” which is as much a declarative mission statement at it is gaudy autobiography – but Young spikes those not-so-tall tales with enough tantalizing details of his personal history to make them crackle with life. For instance “Bound For Glory,” a ripping tale of a trucker who abandons his wife and children for a woman hitchhiking with her dog, who he picks up on the Trans Canada highway, is shanghaied from his own life. Not that Young ever drove an ‘84 International himself, but Pegi his wife of 33 years had admitted hitchhiking across America with a canine pal to visit her brother in Vermont. The tale merges humid sex with celestial poetry, recasting the couple’s own creation myth into a ripping tune and slapping a human face on the stoic musician’s life, capturing pieces of his notoriously complicated psyche in a way that he might not have suspected. A Treasure is full of little disclosures like that, deeply personal without being confessional, engaging without trying to be, and revelatory because of his small observations and his uncommon insight into ordinary detail.