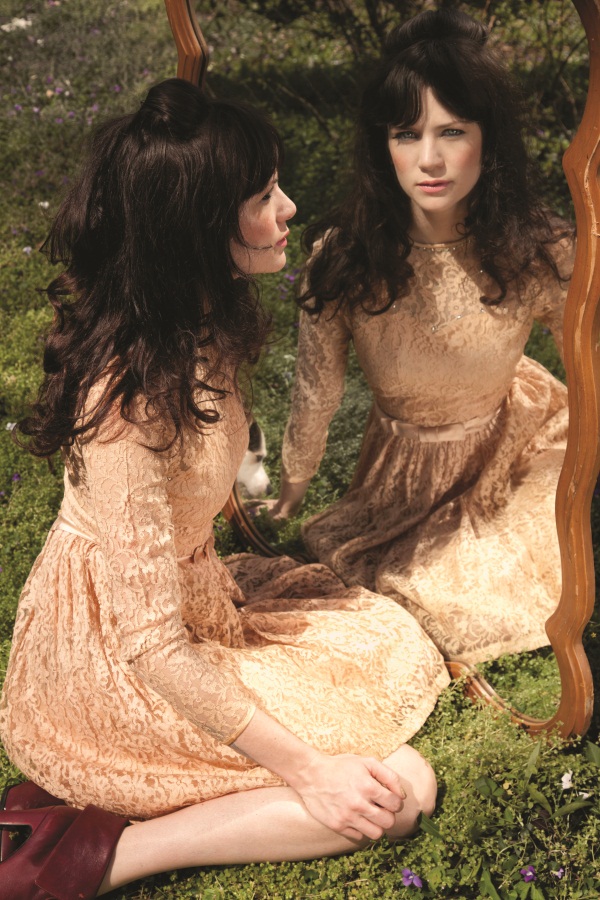 “I failed chorus in the tenth grade. I gotta look up that lady’s name and thank her in the record.”

We’re at a bustling Nashville coffee shop, sitting down with Nikki Lane discussing her debut album Walk Of Shame, a reverb-drenched platter that’s half rock and roll snarl and half hard-country swagger. She’s barely touched her cappuccino but she’s got more energy than 99 percent of the artists we talk to in a given week, rookie and veteran alike. It’s immediately evident that Lane, with her flowing brown hair and big, blue movie star eyes, has excitement to spare and enough enthusiasm to win over even the most jaded Music City types. She’s clearly the sort of free spirit that’s guided by her intuition and instinct, a stark contrast to the calculated careerists that you usually meet in this town.

“I got drunk one night and got on MySpace – which is weird – and looked up bands in Nashville and started sending emails. I was like ‘Hey, I’m coming down there – I don’t know how I’m going to get there, but I’m coming down and we’re gonna make a record. You wanna be my band?” says the Greenville, South Carolina native, explaining her impromptu decision to become a musician after stints in New York and L.A. selling vintage blue jeans.

“And this guy wrote back to me and was like ‘Yeah send me your stuff’ and I was like ‘What am I gonna do?’ So I just took my rent and went down here and I didn’t pay rent for two months. I knew I was probably going to get in trouble, but what do you do? You know what I mean?

“My mother and I watched [Johnny Cash biopic] Walk The Line at some point. I had never seen it and she was like ‘Isn’t he wonderful?’ And I was like ‘Yeah, he’s about to get evicted, just like I am.’ And she was like ‘WHAAAT?!’ See, you think it’s cool when Johnny Cash gets evicted but it’s not so cool when I’m going to. And that was it, that was the switch. You don’t and then you do. It’s a lot of luck and when something happens, saying ‘Okay, I’m going to do it’.”

It’s this embrace of the reckless and impulsive, of making the decisions that mom wouldn’t want you to make, that gives Walk Of Shame its distinct character and eminently identifiable humanity. It’s universal in a way most folks would rather not admit. The title track, with its wobbly organ and propulsive surf beat, captures the downside of the wild one night stand, the sweat-and-stale-booze stench, the regret, the hesitant acknowledgment that it will probably happen again someplace else with someone different – we’re sure you know the feeling.

“Hard Livin’” and “Gone, Gone, Gone” evoke the best of Nancy Sinatra’s work with Lee Hazelwood, sultry yet hard-scrabble, with characters that ooze sensuality but will probably sock you in the jaw if you say something sassy. And “I Can’t Be Satisfied,” well, let’s just say that Muddy Waters has never sounded so much like Billy Joe Shaver. Walk is one of those records that immediately resonates with anyone that’s done something stupid in their lives and never capitulated to regret. It’s an album that rebels against social mores that don’t really mean anything anyway, rebels against the prim and proper in favor of a more practical humanism, not unlike the Nashville underground from which it emerged.

“This town is really good to its people. Artistically, you can’t help but have people get it and want it to happen,” says Lane. “You can’t get as good of a pick-up band anywhere. Everybody is tickled to be helping. Everybody has set up their life to where it’s a third of what you’d spend in New York or L.A. They set up their whole life around [music] and they’re fine with that and they want to do things that are cool. So if you’re in that spectrum, you have to do things in return. It’s almost like a total barter system. And everybody’s band is good! It’s pretty cool to have all these badass friends.”

That ain’t too shabby for a girl that failed tenth-grade chorus.