You don’t have to live in Nashville to know Derek Hoke….but it helps.

The veteran singer/songwriter has been quietly releasing terrific, if decidedly under-the-radar, albums since 2009, but hasn’t seen much traction in the commercial sphere. However, as the host of East Nashville’s iconic club The Five Spot for their $2 Tuesday shows over the past 12 years, he has connected with virtually every major, and minor, name in that city’s esteemed Americana roster.

Still, Hoke’s previous four releases which progressively shift from country undertones to a dusky, dark yet enticingly melodic concoction of various American influences, haven’t received the attention they deserve. Perhaps on this fifth try, he’ll generate some of the overdue praise he clearly deserves.

Hoke’s sonorous voice—a combination of Colin Linden’s grainy edge and Chris Isaak’s smoother Orbison leanings—is a distinctive instrument. In tandem with Dex Green—the producer, co-songwriter and multi-instrumentalist is as essential a part of this set’s success as Hoke—he concocts a shimmering sound; one that creatively mixes subtle rocking and the more meditative musings of Lord Huron into a throbbing, undulating vibe that oozes and sometimes hurdles out of the speakers.

Whether it’s the love song “Say You Will” with its overdubbed guitars and keyboards underlying the mid-tempo ballad (Dex’s short slide solo digs deep into the groove) or the edgy darkness of “Novocain” about its protagonist looking for something like the titular drug to ease his psychological pain, Hoke crafts, and colors a vibrant, often understated yet accessible sonic palette. The mood lightens with Latin percussion bubbling under “Get Gone” with its brushed drums and Green’s keyboards imitating a clarinet as he realizes it’s time to leave his current situation behind singing Don’t want to be a band of gold left out in the rain.

He digs into a modified pulsating blues on “Got Money,” substituting keyboards for guitar on a song with the catchy lyrics of I got style/Just take a look at my shoes/But none of it means a thing/Without you that’s hypnotically shrewd enough to be a single.

Everything converges for the closing “On Top of the Mountain,” which Hoke describes as “the classic ‘careful what you wish for’ kind of tune,” featuring only Dex playing the instruments and Derek singing. It’s a cautionary tale that gradually erupts with dirty slide guitars and layered keyboards throughout its four minutes.

Hoke finds his sweet spot early on the opening track “Wild and Free” with its echoed, engulfing atmospherics, then pushes boundaries on what is lyrically, vocally, and musically his finest project yet. It deserves to be heard and appreciated by an audience far larger than the limited one he has already attracted. 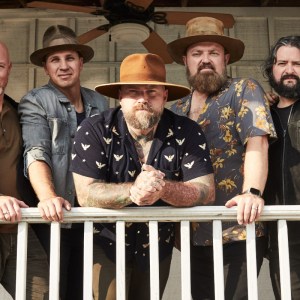