Electronic, new wave, indie singer Santigold’s recent tour cancellation has given the artist some mixed feelings. Her North American tour this fall was in support of her fourth studio album Spirituals, released on Sept. 9.

“I am both sad and proud to announce my decision to cancel the Holified Tour,” the genre-fusing singer wrote in a statement to fans on her website.

“I am sad because it breaks my heart to disappoint those of you who consistently come out to show love and support me for what I do, those of you who have bought tickets and planned trips to come and see me. When I think of disappointing you all, I feel the disappointment deep in the pit of my stomach as well. I was excited to finally be back with you in person to celebrate and bring the music of this new record to life. I know that without you I would never have been able to continue making music for all of these years, and I am so grateful.”

The cancellation was sparked due to difficulties with inflation and the ever-changing landscape of touring in this post-pandemic era.

The singer continued, saying “For the past several years we have all been through immense challenges, some physical, some mental, some spiritual, some economic. And yet, as we have begun to trudge on, much of the toll of that experience has been left untended as we rush back in, attempting to make up for lost time, to reconnect, catch up on bills unpaid, to escape the insanity that had begun to set in. For many of us, the landscapes we are re-entering are not the same.

“As a touring musician, I don’t think anyone anticipated the new reality that awaited us,” she explained. “After sitting idle (not being able to do shows) for the past couple of years, many of us like everyone else, earning no or little income during that time, every musician that could, rushed back out immediately when it was deemed safe to do shows. We were met with the height of inflation—gas, tour buses, hotels, and flight costs skyrocketed—many of our tried-and-true venues unavailable due to a flooded market of artists trying to book shows in the same cities, and positive test results constantly halting schedules with devastating financial consequences. All of that on top of the already-tapped mental, spiritual, physical, and emotional resources of just having made it through the past few years. Some of us are finding ourselves simply unable to make it work.

“In my case, I have tried and tried, looked at what it would take from every angle, and I simply don’t have it. I can’t make it work,” she added, stating that the touring has taken a toll on her, detailing “anxiety, insomnia, fatigue, vertigo, chronic pain, and missing crucial time with my children.”

“I’m coming to you with the honesty that is inherent in my music,” she said in her closing remarks. “How could I release Spirituals, an album about honoring yourself and refusing to cross your own boundaries, and not take this opportunity to do just that for myself? I want you to understand that I am proud to be canceling this tour when it means that I am proclaiming that I, the person who writes the songs, is as important to me as the songs. I will not continue to sacrifice myself for an industry that has become unsustainable for, and uninterested in the welfare of the artists it is built upon.”

You can read her full statement HERE. 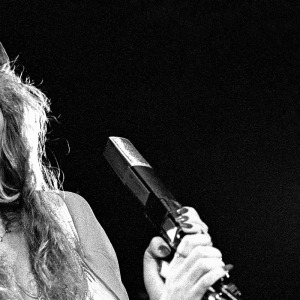