Sometimes even the best acts need a boost to push them to the next level. That happened to Oakland’s Shannon & the Clams.

Through four previous albums, the Clams, led by singer/songwriters Shannon Shaw (bass) and Cody Blanchard (guitar), have been gradually refining and ultimately defining a tough and tender mix of ’60s punky garage rock and roll with surf, and a proudly ’50s aesthetic. Imagine a mash-up of Del Shannon’s “Runaway” with the Reigning Sound and you’re close to the middle ground between giddy fun and darker edges Shannon & the Clams calls home. While the style isn’t totally original—Blondie was doing something similar on their debut and more contemporary bands such as the Detroit Cobras have dipped into this pool—Shannon & the Clams make it work seamlessly. But even with a consistent schedule of an album every two years since 2009’s debut full length, along with constant touring, they remain generally under the radar to most of the US outside of their Oakland base.

It’s an inspired combination. The Black Keys frontman has taken the Clams under his artistic and promotional wing; producing their new, fifth set, recording them in his studio, releasing it on his Easy Eye Sounds imprint, and adding the band as opening act on his current tour. An almost perfect storm of a band steeped in the bluesy, grimy rocking that defined the early Black Keys’ work combined with Auerbach’s high profile, low gloss production. There isn’t a huge sonic difference between Onion and the past few Clams releases, but the songs and instrumentation are tighter and better crafted with defined hooks and choruses. He also gave them access to more instruments, some vintage, to layer in the mix with Melotrons, Acetone and Glockenspiel spouting up at various intervals.

Thankfully, Auerbach’s sense of restraint and the band’s natural rawness keep anything from becoming overly cluttered or, worse, slick, a word that is just not in this band’s vocabulary. Lyrically there’s a theme of broken relationships and a sense of chasing a better day just over the horizon. Tunes such as the hopeful Phil Spector-ish “Don’t Close Your Eyes” and the anti-prom slow dance “Did You Love Me” (that falls on the anguished side of breakups), slow the roll and shift tempos on an album that generally stays caffeinated. And when Shannon’s gutsy, dusky voice rejoices in maybe finding a new love on the Latin rhythms of “If You Could Know,” with “I don’t know where we are but it’s great to be alive,” you’ll want to shimmy and celebrate along with her. Occasionally as on the slower “Tryin’” the concept is in danger of derailing into minor-key weirdness, but that’s one of the disc’s few misses.

The 13 tracks sprint to a conservative 42-minute finish and the styles, although clearly retro, are varied enough to make the set seem even shorter. The production is sharp, focused and plays to the band’s strengths without seeming clichéd or a parody of the classic pop the band obviously idolizes.

It may have taken a rock star and four previous releases to get here, but this is the culmination of everything Shannon & the Clams have been aiming for and is an exhilarating, unqualified success. 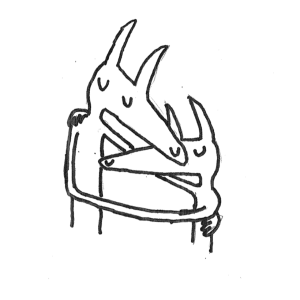