Celebrated songwriter Skip Ewing is gearing up to release his second album in two years- this one instilled with the spirit of the holiday season. A mix of original and rearranged classic Christmas sounds, the seven-song album is set for release everywhere on November 12. The excitement begins today with “Whenever a Child is Born,” premiering with American Songwriter below.

“Wherever a Child is Born,” which Ewing wrote with fellow singer-songwriter Aaron Barker, all started with a conversation.

“I love to co-write situations where the conversation can just go and be whatever it needs to be that day,” Ewing tells American Songwriter. “Whenever I write with [Aaron Barker] we just talk, catch up on things, make sure everyone is alright, and talk about things that mean something to us.”

The song’s hook, Every day in a way is Christmas morn. . . God is there whenever a child is born, focuses on the miracle of every new baby being brought into the world. It didn’t have to be a Christmas song, says Ewing, but it sure was one. Fueling the meaningful conversation with Barker, Ewing was inspired in part to write this song after sitting near a crying baby on an airplane. It’s most people’s worst nightmare, but Ewing decided to look at it another way.

“There’s a line in the song that says Every child that’s born cries with Heaven’s voice. I’ll show you what I mean. I was on a plane and there was a baby crying and people were really put off by this,” he explains. “I tried to turn it around and see that this little human was just expressing themself the only way they know how to. There’s something beautiful in that.”

The beautiful piano and strings accompany a joyful message, weaving in bits of familiar melodies such as the classic Christmas song, “What Child Is This?”

The rest of the collection includes new originals such as the upbeat and jazzy “Mister Snowman” and another piano ballad titled “Just A Kid,” which was co-written with Kent Blazy. Ewing also reworked familiar Christmas songs, including “I’ll Be Home (An American Christmas),” which is a tribute to military families intertwined with “America the Beautiful,” and “Better Watch Out,” which is a fun take on “’Twas The Night Before Christmas.”

This collection closely follows Ewing’s last album, Wyoming, released in August of 2020. The Covid-19 pandemic kept him from going on the road for that record, finally giving him the time to work on the Christmas songs he’d compiled.

Ewing has had a successful career both as an artist and a songwriter. His No. 1 hits include Kenny Chesney’s “You Had Me From Hello,” Collin Raye’s “Love, Me,” and Diamond Rio’s “I Believe.” His recent years took him from Nashville to Wyoming, where he’s gotten to explore his love for horsemanship and continue working on his own music. His goals remain the same: to put love into the world and write music for whoever is listening, not for himself. As he anticipates the release of this album into the world, Ewing sees the relationship between artist and listener through the lens of holiday spirit.

“If them listening is a gift, and I’m offering a Christmas record, that’s my gift; we’re exchanging gifts at Christmas,” Ewing chuckled. “And that’s a pretty cool way to think about it.”

Check out “Wherever A Child Is Born,” premiering exclusively with American Songwriter below. 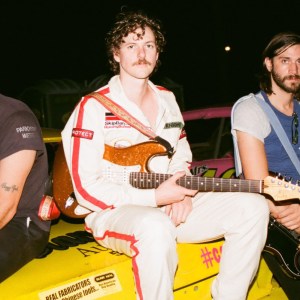