Musician Proud Father, né Brendan Chamberlain-Simon, released a brand new album entitled The View of Earth From Mars, out now (July 16). During the day Chamberlain-Simon drives Mars rovers as a robotics technologist for NASA. After his day job, he moonlights as a musician under the musical moniker Proud Father. This musician blended his daytime job with his creative passion to release an album inspired by other galaxies and universes. With inspirations including Deerhunter, The Blue Nile, and Steve Reich— this record has relaxing, cosmic vibes.

Proud Father recently sat down with American Songwriter for a Q&A on how his work for NASA informed his musical creation process, and how the two very different careers complement each other in unexpected ways.

American Songwriter: Tell us a little bit about your new project!

Proud Father: It’s an album about the first man to go to Mars, and it is in dialogue with my own day job, which is that I work for NASA’s Jet Propulsion Laboratory. I drive rovers on Mars and just flew a helicopter on Mars. I get to spend a lot of my time on another planet.

AS: Have you always also been a musician?

PF: Yeah, I’ve been a musician for my whole life. I grew up playing piano, from second grade on, and then just kind of kept adding things to my repertoire. But it’s been a long-running parallel thread to my space exploration stuff. Music is a huge part of my life, and always has been and always will be.

AS: And how did you get into driving the rovers?

PF: It was very premeditated. I had wanted to do it since I was like a little kid. I had a fascination with space exploration from a very young age. And I was very strangely driven to this one particular goal, and kind of was doing everything from middle school on to set myself up to be qualified for that job. And I ended up getting hired by NASA while I was still in college. So when I was 22 years old.

AS: How old are you now?

PF: I’m 28. So I’ve been working in NASA for six years. I’m based out of Los Angeles and I commute from Los Angeles to Pasadena.

AS: Where do you see yourself post-album release? Are you looking to do more music professionally? Or do you want to work your way up with space exploration?

PF: You know, it’s funny. The premise of the album, part of what the impetus was, was me kind of staring down the barrel of, ‘Oh, gosh, is this my whole life and career!’ I remember on my first day at JPL, I think my boss started talking to me about my 30-year plan. And as a 22-year-old, that was freaky. My relationship with my future has changed really dramatically. I used to, when I was younger, look very specifically towards getting this job. And I had a very long-term vision for my future.

Now… I’m kind of just taking it month by month. But I’m passionate about this, so it’s a nice pickle to be in. And it’s not even necessarily a pickle. Something that’s been really cool about the process of this album is that I have meaningfully discovered that the amount of fulfillment that I’ve pulled from music is not a force that pulls me away from the work that I do. If anything, it helps me grab on to it and derive meaning from it. So actually, the work that I’ve done in music has really ameliorated my relationship with my job, rather than pulled me away from it.

AS: It’s great when you find things that complement each other so well. It’s also an unexpected pairing, so tell me a little about that.

PF: It is unexpected, but it’s funny, it makes total sense to me… I think that the deep-down core emotional fulfillment that I get from space exploration really similar to what I get from music. I think that in both of those endeavors, there’s something about it that feels kind of like there’s an endless mystery to it. Both music and space exploration, I just know that I’m never fully going to get on top of it. There’s something so religiously huge about the way that both of those two things feel to me.

On the space exploration side, I think that’s pretty obvious. This is the exploration of the bonafide unknown and I think I’d be foolish if I thought I was gonna fully comprehend that over the course of my lifetime. But the music thing too, when I am really overcome, or really deep in the weeds of an album that I love, or a show that I’m really connecting to, there’s this indescribably huge feeling that I feel and the power that it has is so much bigger than the scope of myself, or even my immediate environment. And I think it’s interesting that those two things, while they’re really disparate endeavors, really satisfy a really similar sense of fulfillment and meaning.

PF: So basically, it informs the whole thing. And this is the first time that I have written about space at all. I was actually really hesitant to do it for a long time. I think I had worried that because it’s my job, that maybe it would feel overly confined and wouldn’t be original because this is what my job is. But I think two things happened. One is that I realized that sometimes originality can be born out of authenticity— acknowledging that my own story is inherently unique. And if I can tell it with a kind of audacious honesty, then that makes it original and worth telling.

AS: What is the other thing that happened?

PF: I went through this very particular experience that made the process of this record feel really urgent, and like I really genuinely had something to say. And basically what that was, is that when I got hired by NASA to drive these rovers on Mars, I had always thought if I get that job— this thing that I’ve been working for since I was a little kid— I will essentially always feel fulfillment. And in reality, I think the biggest thing that changed for me, when I got that job was by virtue of having achieved it I didn’t have a goal anymore.

This thing that I had wanted to do forever, I wasn’t able to work towards it anymore. And that was really a surprising experience. That was about the last thing that I expected, in terms of how it would feel. The job was exactly what I thought it was, the work is great. It was just this kind of more complicated, emotional experience of worrying that I might never have a goal again, or that I would never connect to the idea of striving. And that kind of led to this really profound sense of existential dread, this feeling of, I’m 23 years old, and some things feel over, in a sense.

AS: How did this feed into your music?

PF: I came up with this concept for the album because I was having trouble processing that because it was a complicated thing. I was feeling this really profound dread and purposelessness and confusion, all of these really complicated heavy emotions. But at the same time, I was in a position of tremendous privilege. I mean had a well-paying, successful job that represented the accomplishment of a dream goal! It felt very unfair of me to be feeling these things. Given that I had to acknowledge how lucky I was, and how flattered I was to be there.

So the concept for the record was born because I had this mentor in college, who was an astronaut, and we had some conversations about his own experiences coming back to Earth after seeing Earth from space. Some of those really stuck with me. I realized that a useful way for me to approach these emotional experiences that I was going through, was through allegory. It was basically like, if I can create this character, then by virtue of it being a character experiencing something so undeniably huge, such as being the first person to go to Mars, then I can kind of bypass this tendency. So basically, it was this tool for me to process my emotions, superlatively and with a lot of vulnerability and a lot of candor that I don’t think I would have been able to do otherwise. I think of this album as a therapeutic experience for me, it was meaningfully an act of self-exploration rather than self-expression.

AS: Those come later in the album that you end on a note of resolve?

PF: Actually, I ended it in a way that that is, frankly, a little bit heartbreaking. And it’s open-ended, but basically, the way that the album ends…there’s a fairly linear progression across the album from this very sure of himself character to someone just in the throes of dread and confusion, and all of these really heavy emotional things that I was going through. The last song on the album is a song called “Perigee,” which, a perigee is the close approach of two planets. So it’s about [the] narrator deciding that when Mars makes it to its absolute closest approach to Earth, that he’s going to send a message to the people of Earth as a way to feel close to them.

It kind of reinvigorates this sense of purpose and meaning. And then on the date, he sends his message. And then he finds himself acknowledging for the first time, I have to wait eight minutes to hear if anybody’s even listening. And all the while, I’ve now started to drift further away again. So it’s very dark. But I wrote that when I was really in the midst of it. That felt very honest to me at the time, this sort of genuine tragedy of mourning. The existence of home as I knew it, and knowing that even if I were to return it would never feel the same.

AS: It’s amazing how you could capture these feelings within a musical allegory. Should we expect more music from you in the future?

PF: Music is hugely, hugely woven into the fabric of who I am and what I do. And I genuinely think I will be making music until the day that I die.

Below, you can peer into some of Brendan’s interstellar works.

The release of the album was accompanied by a music video for the album’s third released single, “LC-39A.” The video, cut by Proud Father himself, is from archival footage of the Apollo and Gemini missions. LC-39A is the launchpad that the Apollo missions launched from, and the song is about the narrator’s meditation on the launchpad, strapped in and lying on his back, knowing he’ll never stand on Earth ever again. You can listen to the full album, The View of Earth from Mars, here now. 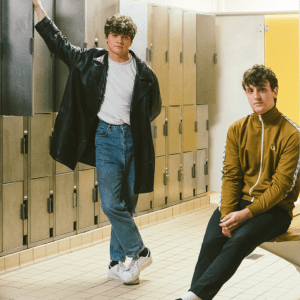