When you’ve got six members in your band — many of them multi-instrumentalists — you can cover a lot of ground. That’s the case with Nashville’s Kopecky Family Band, a group of instrument-swapping coeds whose songs bridge the gap between sweeping chamber-pop and indie rock.

Directed and produced by J. Bryan Dill, this live performance of “Angry Eyes” shows the band at the full reach of their abilities. They jump between tempos, pile their harmonies into stacked boy-girl harmonies and barrel toward a pulsing, bass-propelled finish. The setting is a familiar one — the house that doubles as the band’s rehearsal space — and the sound quality is great, proof that several hundred tour dates alongside groups like The Lumineers, Devotchka, and Gomez have whittled this band’s broad sound to a fine point.

“‘Angry Eyes’ was one of the first songs we wrote for Kids Raising Kids, and we really have been playing it live for two years now,” says co-founder Gabe Simon, who shares vocal duties with keyboardist Kelsey Kopecky. “It’s actually probably the oldest song on the record. It was birthed in the house that is our practice space (which you see in the video) and completed somewhere out there on the road…. which is the story of almost all our songs. “Angry Eyes” was our first attempt at a pop song and it has become our live show anthem, not to mention it was a party to record. What starts as a slow-tempo dream shifts to an upbeat foot tapper… followed by a runaway ending. It’s the closer of the set and one of our personal favorites. Oh, and be sure to listen to the bass work at the end.” 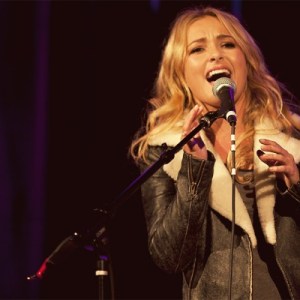