Though you might think Silk Sonic—the throwback duo consisting of Bruno Mars and Anderson .Paak —are the least likely candidates for being fans of nu-metal, the outfit gave a surprise performance at an after-party Sunday night (August 14) and delivered a rousing rendition of Papa Roach’s “Last Resort.”

The duo shared their debut collaborative album last year to critical and fan acclaim. To celebrate the LP, they embarked on a residency at the Las Vegas Park MGM. “An Evening With Silk Sonic” promises a feel-good, retro-vibed show with the duo running through the 10-track self-titled album.

Following their set, the duo stopped by for a surprise performance at the Barbershop—a Las Vegas club that’s owned by the same owners as the Park MGM. Judging from fan-shot videos of the impromptu set, both Mars and .Paak were keeping the party going, red solo cups in hand with .Paak in a blonde wig.

For their version of “Last Resort,” the duo turned the desperate, pleading track into yet another party song to add to their belt. Though Papa Roach’s original version was angst-ridden and centered around suicide, Silk Sonic made it pumped up and somehow joyful. In the past, both Mars and .Paak have expressed their love for the genre, adding similar artists to playlists and attending sparse hardcore shows.

In addition to screaming out the lyrics to the Papa Roach track, the crowd was also given a buttery version of Outfield’s “Your Love” and got the Silk Sonic live band playing along with a DJ set that included music from Clipse and Ja Rule. It is also rumored they covered the Police’s “Roxanne” though no footage has been posted online. Check out some fan videos below.

The residency has just three remaining dates—August 16, 18, and 19. You can find any remaining tickets HERE. 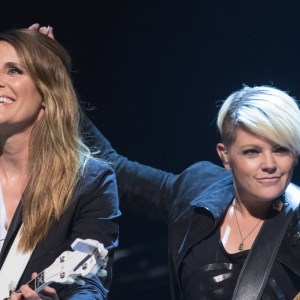