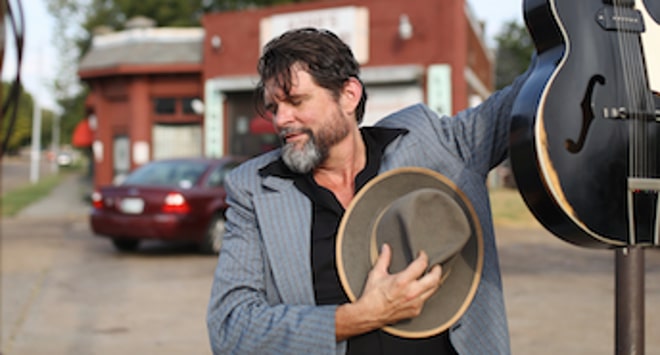 The now Memphis-based Texas guitarist, Will Sexton, teamed up with New Orleans veterans, The Iguanas, for a ten-track roots-rock album, Don’t Walk the Darkness. The album – his first in over a decade – will be released by Big Legal Mess on March 6, 2020.

“I’ve been an adaptable person. Sometimes my surroundings are a little less than desirable and influence my headspace,” Sexton told American Songwriter. “My premier track “Temptations Call” is a reminder to be accountable in my own choices. Accept that life will jab at me and try to find its sense of humor.”

Along with older brother Charlie, the San Antonio native was a musical prodigy. After he moved to Austin, where he played with iconic Lone Star figures, he scored a major label deal while still in his teens fronting Will and the Kill.

Sexton’s upcoming album, Don’t Walk the Darkness, marks a delayed return to his solo career, but also represents a personal and musical rebirth following a stroke he suffered in 2009. This devastating event robbed him of much of his verbal and language abilities and even forced him to reconsider his approach to playing guitar.

In the years following his stroke, Sexton met and married fellow singer-songwriter and frequent collaborator Amy LaVere. The two settled in Memphis in 2013, where he joined LaVere and John Paul Keith’s band, Motel Mirrors. He also got in with artists on the Big Legal Mess and Bible & Tire Recording Co. labels, leading the house band at producer Bruce Watson’s Delta-Sonic Sound studio.

“Memphis is an important part of what I’ve become,” enthuses Sexton. “I’ve been able to immerse myself and tune my ear to what makes this place so magical —the amazing musicians here.”

For his new album, Sexton set up at Delta-Sonic, and combined his new digs in Memphis with a crew of old favorites from New Orleans, The Iguanas, to serve as his main backing band.

“They’re such a natural entity,” lauded Sexton, “Like this powerful train that glides itself along the track. That meant I only had to worry about singing and playing a little guitar.”

As part of his new approach to recording, Sexton cut tracks for most of the album in a pair of just five-hour sessions. Inspired by John Hiatt’s Bring the Family, Sexton is envisioning a “live, dynamic record.”

“Most of my life, I’ve complicated things musically,” said Sexton. “But, nowadays, I have a different approach: it’s less cerebral and more about gut and soul.”

Two critical tracks are unheard numbers from Sexton’s back catalog. “Only Forever” was a lost gem dating back to the early ’90s. The other, “Don’t Take It From Me,” was co-written with the late icon, Waylon Jennings, in 2001. “We wrote it right before he passed away,” recalls Sexton. “I thought it was important that the songs have a life and get out into the world.”

Sexton feels this album is a new start, but also a “logical extension” of the past 40 years. “The music is brand new, but I’m the same old me.”