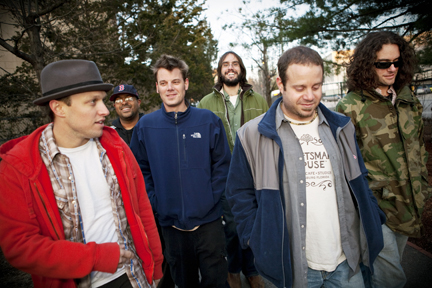 Ryan Montbleau Band have just released the neo-folk masterpiece Heavy On The Vine, produced by beloved singer-songwriter Martin Sexton. Hard-working frontman Ryan Montbleau took time out to talk to us about his craft, winning songwriting contests, and the advice he’s gleaned from Stephen King.

What’s it like working with and touring with Martin Sexton?

In a nutshell, it’s great. He just kills it every night and has been at this a lot longer than I have. So it’s inspiring to work with a veteran road warrior who also happens to be a major musical hero of mine. My favorite quote about Martin has always been “He is so talented it is joyously absurd.” It’s true. He has some amazing ears and the guy can just breathe music. And of course he could toss you across the room with his voice if he wanted to! It’s amazing to hear, night after night after night. He’s also a bit of a prankster. Fun guy to hang out with. And he basically eats BBQ every single day on the road.

How’d you get him to produce your record? What was he like as a producer?

He had asked us to be his backup band/opener for his “Sugarcoating” tour. In the course of rehearsing with him for that tour, it came up that we were planning on recording a record of our own before we left. He threw his hat in the ring to produce it and recommended that we track it at Camp Street, where he had done Sugarcoating. It all just made a lot of sense, as we were playing a bunch of music together already, and we were definitely looking for a producer.

Martin did a great job. His main thing was that he didn’t want to “put his fingerprints” on the record. He wanted it to sound like Ryan Montbleau Band, and he did an excellent job of allowing us to free up in there and just be ourselves. It’s our most stripped-down record to date. Martin helped the arrangements where it was needed, had ideas for every instrument, coached us through vocal harmonies, even did an interpretive dance in the live room when we needed to lighten up a little! Mostly he just did a great job of getting us to relax, and not putting anything in the tune that it didn’t need. That has always been an issue for us.

You’ve done the solo artist thing and the band thing. How do they compare?

Well, one is Ryan Montbleau, and one is Ryan Montbleau Band, so as you can see they’re totally different. No, I’m very lucky to have the guys around me that I do. And they’re such good musicians that they challenge me to be a better player, to be a better ensemble player for sure. I’m lucky enough that when I play with a band, I get to still do my thing, to play my songs, sing my lyrics. And I’m also fortunate enough that our band knows how to play a listening room just as well as we know how to throw a dance party. I still do love playing solo; in the right setting, that can be the most powerful medium. But on a good night the band is greater than the sum of its parts. It’s just a bigger thing. It’s harder to grip a whole club on a Friday night solo than it is with a band.

You’ve won a number of prizes in your career, like The 2007 Boston Music Award Best Local Male Vocalist,  and 2007 International Songwriter’s Competition for lyrics. How did that effect your career? You wrote on your website, Tom Waits (a judge for the ISC) “practically made out with our band,” which is a pretty funny way of putting it.

Ha ha, that was actually our webmaster Jon Adams who wrote that. He’s always got some hilarious way of twisting reality. He even entirely made up a band member who lives only in cyberspace. Ted Wilson plays trombone, has a blog, MySpace, pictures, you name it, and is completely a figment of Jon’s imagination.

As for the awards, I guess the Boston Music Award was the best, because I got a big fat shiny trophy out of it. Not often you get

trophies after you’re eleven! I wanted to wear that thing on a chain around my neck I liked it so much, but it was awfully heavy. You

know, it’s nice to win things, nice to get some recognition, but those things only mean so much. One of the BMA nominations I got years ago happened purely because of some connection that my old manager had at the time. So it is what it is. I’m not opposed to entering more contests but I haven’t entered anything in a while. In terms of affecting my career, I suppose those awards do affect the way that some folks perceive you, mainly the press. And like I said, it can be very nice to get some recognition. It can help motivate you to keep going in this wacky business. E-mails from fans can serve that purpose just as well though, if not much better.

I guess if I had to pick one, maybe “More and More and More.” It’s a bit of a long-winded song, but I feel good about the writing on it.

And the message is one worth hearing, I think. Plus, that’s one that Martin really helped out on. We were sort of burned out after a long day of tracking and he said, “Let’s try like a ‘Stones go to Nashville’ version of this.” We were skeptical to say the least, but we tried it, and that’s what you hear on the album. I think it came out great.

I love the sound of the word “book” for some reason. And “home.” Those words just seem to work sonically on a primal level. I try not to hate any words. Used to say that I hated the word “jaded.” Maybe I just had never been jaded at that point, because I’ve since used it in songs!

Usually melody first, although more and more I’m starting to conceive phrases and then set them to a melody. That first, initial burst of inspiration is always the easy part. Then it’s time to go to work. I’ve really been enthralled by Paul Simon’s method of “discovering” what is already there in the song. Stephen King mentions the same thing in his book On Writing. You’re not a treasure hunter, digging with a backhoe in the ground for the lyrical trunk of gold. You’re more like an archaeologist. The song is there somewhere under the surface and there is a time to get the backhoe out, but more often you have to get in there delicately with a toothbrush and discover the finer points of what’s already there. Your job is to uncover the truth in the song. I love that.

It would be nice to just have a song immediately come out finished. And I’ve been finding that oftentimes, the initial thought is usually the best. But I think revising is essential. As Stephen King said in the same book, “To write is human. To edit, divine.” Creativity is not stifled by revising, and can actually grow much deeper that in that initial burst.

I’m not sure if she’s underrated, but Deb Talan has always been a major inspiration. She’s half of The Weepies now. Just a brilliant writer. And Nathan Moore, who has solo records and also fronts Surprise Me Mr. Davis, which is him with The Slip. Killer.

“The Poet Game” by Greg Brown. “Stardust.” Anything by the Beatles. And the one I’m working on now. I wish I had written it already! No, actually, where’s the fun in that? 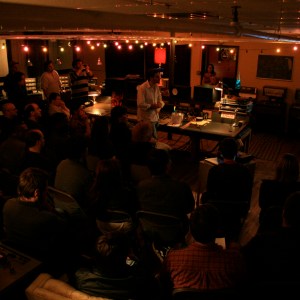