Set at a posh party in the Swiss Alps with her soon-to-be husband, the poet Percy Bysshe Shelley and the more lascivious writer Lord Byron in 1816, 19-year-old Mary Shelley and the revelers were tasked with writing a ghost story. In the early morning hours, Shelley had an eery waking dream, which inspired her classic 1818 novel Frankenstein.

Like many other literary greats who cited dreams, even waking ones, as the source of inspiration for some of their greatest stories—Robert Louis Stevenson’s nightmare that inspired The Strange Case of Dr. Jekyl and Mr. Hyde or William Styron’s remnant of an older dream mixed with a new one which led to Sophie’s Choice—the same can be said for songwriters, who woke from dreams with a melody, a verse, or a full song running through their head.

Here are 15 songs that were inspired by some sentimental or strange dream, full-blown nightmares, and other sleep-induced visions.

It was all a dream—literally. When Paul McCartney was 21, he woke up from a dream and penned “Yesterday” in less than a minute. To this day, McCartney still doesn’t know how he wrote one of the most famous songs by The Beatles, only that it was a quick one. “I had a piano by my bedside, and I must have dreamed it because I tumbled out of bed and put my hands on the piano keys and I had a tune in my head,” explained McCartney. “It was just all there, a complete thing. I couldn’t believe it. It came too easy. I went around for weeks playing the chords of the song for people, asking them, ‘Is this like something? I think I’ve written it.’ And people would say, ‘No, it’s not like anything else, but it’s good.’”

The melody came to him in the dream, which he quickly pulled together in chords, then scribbled down lyrics as soon as he awoke. “I’m a great believer in dreams,” said Paul McCartney of the magic of writing their 1965 hit. “I’m a great rememberer of dreams.”

2. “(I Can’t Get No) Satisfaction,” The Rolling Stones

Keith Richards woke up in the middle of the night and recorded the riff and the words “I can’t get no satisfaction” down on cassette. “I thought it was great then, went to sleep and when I woke up, it appeared to be as useful as another album track,” said Richards. “It was the same with Mick too at the time, you know. It goes ‘da-da, da-da-da’… and the words I’d written for that riff were ‘I can’t get no satisfaction.”

Read our Behind the Song on “Satisfaction” HERE.

Of his 1967 hit, Jimi Hendrix said it was based on a dream he had where he was walking under the sea and there was a purple haze surrounding him. Though it seemed more nightmarish, his faith in Jesus—initially writing the chorus—purple haze, Jesus saves before switching it up—saved him in the dream.

As The Beatles were on the verge of breaking up, Paul had a dream “between deep sleep and insomnia” about his mother Mary, who died when he was 14 years old. In the dream, Mary told Paul “let it be,” and he started writing the song on his piano the next day.

Read our Behind the Song on “Let It Be” HERE.

Paul McCartney wasn’t the only Beatle who found songs in dreams. Lennon turned his dreamy gibberish— Ah! böwakawa poussé, poussé—into the chorus for “9 Dream,” off his fifth solo album Walls & Bridges. The song peaked at No. 9 on the Billboard Hot 100 Chart. As for the meaning of böwakawa poussé, poussé—there is none. Lennon just liked how it sounded.

As Brian May was undergoing some medical care in 1974, recovering from a bout of hepatitis, his fever-induced dreams inspired a song about someone frightened by a dream of a prophet foretelling the end of humanity: I dreamed I saw on a moonlit stair / Spreading his hand on the multitude there / A man who cried for a love gone stale / And ice-cold hearts of charity bare. The Night at the Opera track was never released as a single and is the longest song on the album, clocking in nearly eight and a half minutes.

Known for having some disturbing and vivid bad dreams while on tour with Rush, then waking up to share them with his bandmates, guitarist Alex Lifeson had one dream in particular that inspired the 12-part instrumental that became “La Villa Strangiato.” Though the song has no lyrics, it does have a storyline and is broken up into 12 parts: Buenos Nochas; Mein Froinds!; To Sleep, Perchance To Dream; Strangiato Theme; A Lerxst in Wonderland; Monsters!; The Ghost of the Aragon;  Danforth and Pape; The Waltz of the Shreves; Never Turn Your Back on a Monster!; Monsters! (Reprise); Strangiato Theme (Reprise); and Farewell To Things.

“I woke up in the middle of the night with that line in my head,” said Sting of the very stalker-like chorus of the band’s 1983 Synchronicity hit “Every Breath You Take.” The singer said he sat at the piano and had it written within a half hour. “The tune itself is generic, an aggregate of hundreds of others, but the words are interesting. It sounds like a comforting love song. I didn’t realize at the time how sinister it is. I think I was thinking of ‘Big Brother, surveillance and control.” Sting wrote the song while staying in the Caribbean after his breakup with his first wife Frances Tomelty. “I think the song is very, very sinister and ugly,” said Sting, “and people have actually misinterpreted it as being a gentle little love song when it’s quite the opposite.”

Read our Behind the Song on “Every Breath You Take” here.

Todd Rundgren claimed that most of his 1983 hit “Bang The Drum All Day,” off his 10th album The Ever Popular Tortured Artist Effect, came to him in a dream, so he rushed to record whatever he could remember. Rundgren later recorded a follow-up, “Bang the Ukulele Daily” for his 2000 album One Long Year.

The stream of consciousness rant of lyrics mostly came to Michael Stipe in a dream he had where he was attending a party much like one he had gone to when he was 19. At the party, the attendees all had the initials “L.B.”—The other night I drifted nice continental drift divide /Mountains sit in a line, Leonard Bernstein / Leonid Brezhnev, Lenny Bruce and Lester Bangs / Birthday party, cheesecake, jellybean, boom—and the only food being served were jelly beans and cheesecake. In the dream, all four—Leonid Brezhnev, Lenny Bruce, and Lester Bangs—were at the party. The real-life party Stipe actually attended was in 1980 at music journalist Lester Bangs’ home, and the only food he and guitarist Peter Buck wanted to eat was the birthday cake and jelly beans.

When Billy Joel woke up singing the title track of his 1993 album, and it wouldn’t get out of his head, he decided it was worth working on the song. Produced by Kortchmar, River of Dreams was Joel’s 12th album and the title track reached No. 1 on the Adult Contemporary chart and was nominated for a Grammy for Record of the Year but ended up losing to Whitney Houston’s triumphant Dolly Parton cover, “I Will Always Love You.”

Dreams have served Cash well. He got the idea to add mariachi horns to his 1963 classic “Ring of Fire” from a dream. In another dream, Queen Elizabeth was telling Cash that he was like a “thorn bush caught in a whirlwind.” He didn’t understand what the words meant until he later read a verse in the Book of Revelations. Putting the pieces together, Cash began writing “This Man Comes Around,” which was featured in the 2002 film Dawn of the Dead and released on Johnny Cash’s American IV: The Man Comes Around. The words from his dream are referenced in the chorus:

When The Killers were working on their second album Sam’s Town (2006), singer Brandon Flowers remembered a dream he had about Kurt Cobain, a ship, clouds—and a ringing melody. “It sounds ridiculous, but it was Kurt Cobain on a ship, in the clouds,” said Flowers. “He was singing this melody and I remember thinking he sounded like Bob Dylan, so that made it even weirder.” The melody Cobain was singing became the melody of “Enterlude,” which melts right into the next track “When You Were Young.”

As she was sleeping in a camper in Germany, Florence Welch had a dream about her late grandmother, who was giving her life advice. In the dream, Welch remembers holding her grandmother’s legs and crying during their interaction. “It was really emotional, and I woke up crying,” said Welch. Inspired by that experience, “Only If For A Night,” would become the opening track of Florence + The Machine’s second album Ceremonials.

When the late Black Panther founder Huey Newton (1942-1989) came to Annie Clark (St. Vincent) in a dream, she was sleeping under some strong sedatives she had taken to relieve jet lag. She woke up and started writing “Huey Newton,” the fourth track off her self-titled album. “I had this hallucination that Huey Newton was in the room with me,” said Clark. “We didn’t talk about the Black Panther party. We just kind of communicated. We understood each other. I was as high as a kite.” 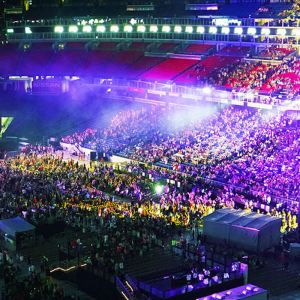 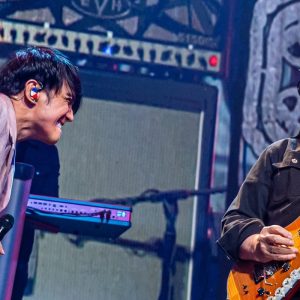