On the heels of releasing their latest studio album, 5SOS5, 5 Seconds of Summer has shared a music video for one of the album’s tracks, “Bad Omens.” In the video, a pair of star-crossed lovers push the limits on how far we should go in the name of love.

Helmed by Ukrainian directors Alyona Shchasnaia and Danny Mitri, the visual sees the leading couple haunted by literal red flags —a nod to the proverbial ones you can come across while dating. The band narrates the action on screen as the couple wakes up in a totaled vehicle, disheveled and disoriented. The video then flashes back to how they ended up in that situation in the first place—not being able to let go of one another.

The red flag eventually takes over and becomes a cape for the vehicle as they drive over a cliff. The video then circles back around to the somber scene we find them in at the beginning. Check out the video below.

“We are really proud to have worked with Ukrainian directors Danny Mitri and Alyona Shchasnaia to shoot the video for ‘Bad Omens,'” 5SOS shared in a statement on Instagram. “Ashton had a vision that Alyona and Mitri took and developed into the beautiful metaphorical video you see today.”

They added: “This was the very first international commercial/video shoot in Ukraine since the war began so we want to thank Alyona, Mitri, and all the people involved in Ukraine who made this video possible. They were so passionate about shooting it and we are so grateful to have worked with them on it.” 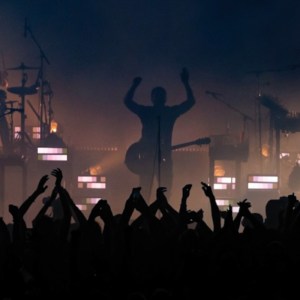