In 2012, Alicia Blue quit her job and started cleaning houses. On a rainy Christmas Eve, while searching for her client’s apartment in Los Angeles’ Thai Town, she found Malcolm Clark Hayes, Jr.

A poet with no aspirations to be a musician, Blue vividly remembers first meeting the soul artist, who had toured with Little Richard and a big part of the England’s Northern soul scene in the late ’60s, working with Barry White and Johnny “Guitar” Watson. Hearing funk music blasting from his sixth floor apartment, at first Blue considered turning around and leaving. “I knocked and heard this guy say ‘come in. How are you?’” remembers the Los Angeles singer and songwriter. Hayes, then in his 60s and wheelchair-bound following a stroke when he was 29, instantly connected. Eventually, Hayes opened Blue’s world to everything about music—blues, soul, jazz—forever transforming her life. “I wouldn’t be here if I didn’t meet him,” shares Blue, “because I wouldn’t be in music.”

Keeping her promise to Hayes, who passed away in 2015, that she would have to go all the way and never give up if he taught her what he knew, the indie folk-rock artist continues to captivate in her poetic storytelling since her self-titled debut in 2019 and follow up, 2020’s Bravebird and through new single “Blackbird,” produced by Eduardo Rivera, and her upcoming third album with co-writers Cage the Elephant’s Lincoln Parish and Sadler Vaden (Jason Isbell & the 400 Unit).

Working with Parish, more traditional rock elements are naturally threaded in the new album. “On some of the songs we’ve written together, there’s this rock underbelly, and that felt so correct for me, rather than just something real pretty,” says the Los Angeles singer and songwriter. “The intimacy of my lyrics and storytelling laid over this rock and roll, that approach is drastically different and also feels right as I dig deeper into myself as an artist.”

For Blue, lyrics always come first. “I just vomit prose, at least three pages, and then I’ll reread the bullshit I just spewed out,” she says. “Then there’ll be five little kernels of truth in there, and I’ll extract those lines and start building a song around, and find the music to match that sentence.” Recently performing at Revival Studios, Blue took on several of her original songs, including one of her most prolific tracks, “Magma,” off Alicia Blue, and tackled Kate Bush’s 1985 hit “Running Up That Hill.”

“When I cover a song, when I write, or when I listen to music, my first order of business is to notice if I’m somehow changed, to notice if I’m feeling, getting some kind of chill, or being stopped in my tracks by what I’m hearing,” says Blue. “I needed to cover Kate Bush’s ‘Running Up That Hill,’ because it was exactly the opposite.”

The lyric always leads, and the music always follows, but when the words belong to someone else, emotion leads the way. Initially uninterested in the lyrics to the Hounds of Love track, Blue instead tapped into what she was feeling inside—and something in the chords, in the melody and how both united. Then, Blue became “intimate” with the words—a song Bush wrote exploring the misunderstandings between a man and a woman, and what would happen if they swapped roles for awhile, through a deal with God—and the song became person for her.

“There was still a ton of mystery there,” reveals Blue. “I couldn’t make much of her lyrics in a literal way, but everything felt undeniably true… It felt universal and completely singular all at once. That’s how I knew this would be something I could sing for a long time, even if I didn’t write it.

She adds, “‘Running Up That Hill’ feels like a conversation that is ever-evolving. It’s a big song, because you can hear your own life echoed inside of it. It’s collective, and in a world where you can’t be everything to everyone, it’s everything. That’s the hit I get from it.”

Another track Blue revisited was “Magma,” is Blue’s bluesy creed to a generation often presumed as most indifferent.

“Magma” was the start of it all, a critical etching of my identity as a songwriter,” says Blue. “I’d sort of thrown all bets to the wind when I wrote and released this song two years ago. I was full of as much resentment as I was hope. I was as down on myself as I was proud and felt this sentiment echoed by my peers, this sort of invisible string connecting my generation; the so-called self-absorbed millennials.”

Also produced by Rivera, who worked on Blue’s first release, “Magma” is a “gift” to her generation, a “badge” that shines and uplifts.” Revisiting the track with her band—guitarist Ben Greenberg, bassist Patrick Taylor, and drummer Max Meizlish, along with Jason Goldstein on keys—Blue says the song continues to unravel, becoming harder and more unapologetic.

“It’s a gentle ‘fuck you’ to the generation above us who were blaming and taking digs at millennials for our attachment to our phones and social media,” says Blue. “The grit of my sentiment and resentment seemed to cut through with a little less sweetness this time, a little more willing to tell it like it is, and own the darkness that I’m celebrating. I sing it now with less will to please and was unconcerned with sounding beautiful. That’s the sentiment of this new version of ‘Magma.’ This version became thicker, more real and filled with a little more heat, and closer to the track’s title.”

Now, Blue has move beyond pretty. She’s stunning in her transformation from dreaming poet to a living artist, and in the short pocket of time since Bravebird, Blue says she’s already grown light years. “That album was a rehashing of all this overdue shit, emotionally from my past,” shares Blue of the album. “I’d never had a therapist, so it was almost like making that album was like a therapy session. Now, I feel like some got a little more aligned after getting all that out.”

Shifting from Bravebird, Blue recently released her new single “Blackbird,” an folk-driven track that initially took form during a drive back from Joshua Tree with two friends, who shared stories of Japanese internment camps. Thinking of her own frustration over discrimination against her Mexican-American family and Black Lives Matter, “Blackbird” is Blue’s pensive look at conscious hate, tolerance, and ultimate acceptance.

“Blackbird” finds Blue less afraid of her sound and words, in her unswerving forced to choose between two poisons / spewing heat or keeping cool. “I’m less afraid to sound bigger and sound less apologetic,” she says. “That’s rock and roll. If anything it’s not apologetic, and that approach seems to been born out of a pandemic.”

Forever a poet, at one point, Blue admits she compromised everything while in a toxic relationship. “I was trying to like smash it down, and once that fell through, I fell into the poet deeply and wrote my first EP,” says Blue. “Once that relationship ended, I got really protective of the poet and I was like, ‘I’m never gonna abandon you again,’ because it’s my gift. Now, I have no problem defending it.”

Looking back on her beginning, and Hayes, Blue says there were so many life-altering, epic moments with the artist, who passed away in 2015—everything on the practical, musical level, like making sure your bass player and drummer always vibe, to her musical surname, “Blue,” which stuck once Hayes informed her that she sounded sad when she sang.

“I wanted to be a poet at that time, and had no music in my life, and I didn’t know he was a musician yet, but he thought me what an artist is,” says Blue. “He was this person traveling the planet, uncompromising to the beat of his own drum, and I wanted that. My meeting and encounter with him was a transmission of how to be that.”

Blue adds, “I look back on the little girl I was walking into his apartment, and I don’t even think I realized the magnitude then. I could feel it, but I couldn’t intellectually have perspective on it. I do now.” 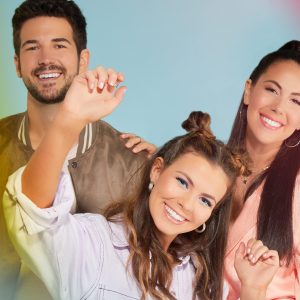 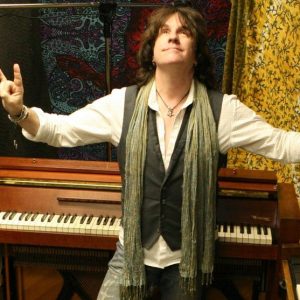