Emmy-winning actor and comedian, Leslie Jordan, died on Monday (Oct. 24) at the age of 67.

According to the Los Angeles Times, Jordan was driving a BMW in Hollywood, California on Monday morning when he crashed into the side of a building at Cahuenga Boulevard and Romaine Street. He was declared dead at the scene. At this time, it is unclear whether Jordan was killed in the crash or suffered a medical emergency beforehand. Law enforcement reported, the condition of the vehicle suggested Jordan may have lost control of the vehicle before the crash.

Jordan’s agent shared in a statement: “The world is definitely a much darker place today without the love and light of Leslie Jordan. Not only was he a mega talent and joy to work with, but he provided an emotional sanctuary to the nation at one of it’s most difficult times. What he lacked in height he made up for in generosity and greatness as a son, brother, artist, comedian, partner, and human being. Knowing that he has left the world at the height of both his professional and personal life is the only solace one can have today.”

Best known for his roles in television shows like Will & Grace and American Horror Story, and in movies like The Help, Jordan’s 30-year career was characterized by screen-stealing performances, punctuated by a sharp, witty Southern accent, all wrapped up in a 4-foot-11 stature that was bigger than life. He currently starred in the FOX sitcom Call Me Kat with Mayim Bialick.

The openly gay Memphis, Tennessee native had an affinity for the traditional hymns of his Southern Baptist upbringing and released his first album, a collection of Southern gospel tunes. Titled Company’s Comin’, Jordan certainly made his musical debut in good company. He recruited the help of greats like Dolly Parton, Eddie Vedder, Tanya Tucker, Brandi Carlile, Chris and Morgane Stapleton, and so many more.

“My friend Travis Howard and I decided to do this gospel album, because his story … he’s not gay. He’s straight as a board and married with a new little baby, but he had the same … his was just shame,” he told Southern Accents Radio on Apple Music country about his gospel album. “He said they just made him feel so ashamed because he would have bad thoughts and this and that. So when we started talking about it, the thing that we did love about growing up in the church was the music. That was the fabric of our childhood. I knew, and when we decided we were going to maybe do a gospel album, when we started listing all the songs and the people that we wanted to sing the songs with, it was pretty amazing the memories that it brought back, because I don’t have any ax to grind now. I’m 66 years old. I’ve worked through any problems. I’m perfectly happy with who I am, what I am. And if you have a problem with it, that’s your problem. That’s not my problem. Yeah, that was the wonderful part about doing that gospel album.”

In addition, Jordan spoke about his meeting with the one and only Dolly Parton. “Dolly has a guy named Steve Summers that’s been with her for 30 or 40 years. He designs all her dresses and goes everywhere with her. And I pestered him for years. I said, ‘Please let me meet Dolly. Please.’ He said, ‘Well, when the time is right, it’ll happen.’ Well, I was recording with Tanya in Nashville and he called and said, ‘Now listen, I know it’s pouring rain, but Dolly’s over here at a studio.’ Well, I just left Tanya sitting. I did. ‘Bye Tanya. I’m off to see Dolly.’ But anyway, I ran over there and it was COVID, so we had our masks, we couldn’t hug, we couldn’t get near each other, but we sat down and glommed onto one another and didn’t shut up for about an hour. And people say to me, ‘Well, what’s she like?’ Well, you know exactly what she’s like. You know exactly. Dolly is Dolly. And I now get up in the morning and I say to myself, if I have a problem, ‘Well, what would Dolly do?’

This is an ongoing story.

Listen to “Farther Along” from the album, Company’s Comin,’ featuring Chris and Morgane Stapleton, below. 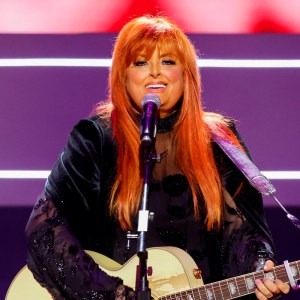 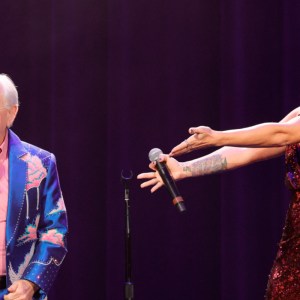