Sat on a park bench near his home in Melbourne, Eddie Perfect is tirelessly working. Surrounded by the daily mélange of passersby—a bustle of joggers, strollers, and people walking their dogs—this is where the Australian actor, comedian and composer does 90 percent of his writing. Working in parks is a habit that stuck after Perfect relocated to New York City several years earlier to write the music for the Broadway musical Beetlejuice. Holed up in a tiny apartment on the Upper West Side with his wife, kids, and very little space to work, Perfect started writing outdoors.

“I had a keyboard in my bedroom, so it was cramped, and the kids were in the house, so there was no sort of escape from people,” laughs Perfect, who often found himself writing “Beetlejuice” in Central Park. “But necessity is the mother of invention, and that’s where I really took to writing outside.”

While in New York, Perfect composed the hit musical—a gig he first landed after wowing director Alex Timbers with demos of songs “Dead Mom” and “The Whole Being Dead Thing”—and one that would eventually land him a Tony Award nomination.

Filled with a sampling of original show favorites like “What I Know Now,” which became an instant TikTok hit and “Say My Name,” 15 additional tracks that were cut from the final Broadway production are weaved into The Demos, including the opening number “Death’s Not Great” and closing “Ain’t It Strange?” along with “Mama Would,” a song written for Lydia Deetz as memorial to her mother, the comedic Beetlejuice and Lydia duet of “You Can Only Work with What You Get” and the Charles Deetz ballad “A Little More of Your Time.” Throughout, Demos showcases Perfect’s genre bends on the alt rock-driven “Mixed Them Up Together” and more hip-hop beats of “Everything is Kinda Meh.”

“It felt like the perfect time to release the demos,” says Perfect, “with the absence of actual live theater, and the fact that ‘Beetlejuice’ has got an uncommonly rabid fan base that’s interested in not just the show itself, but the world of the show, and the process of making the show.”

Rarely tied to the songs that were cut, Perfect understands that for Broadway, the music has to ultimately work for the story and connect to the audience. Additionally, Scott Brown and Anthony King, who wrote the book for the musical, were never afraid to cut what didn’t work, which made the process easier.

At times, whole scenes or whole acts would sometimes go, as they were working around music in the netherworld, or how they were going to deal with the seance section.

“It’s a very weird balance when you’re putting a show together,” says Perfect. “A lot of it is not about how much you like an individual song, but where it puts the energy in the audience. Things constantly changed, and as a result if a scene didn’t exist anymore then the song went with it. It’s hard, but there’s always another idea.”

For Perfect, his demos represent the bigger picture of the Beetlejuice the musical, based on the 1988 Tim Burton film starring Michael Keaton, Winona Ryder, Alec Baldwin, Geena Davis, and Catherine O’Hara, as well as the animated TV series, which ran from 1989 through 1991.

“The duet between Beetlejuice and Lydia, ‘You Can Only Work with What You Get,’ was sort of like a top hat and cane swing song,” says Perfect. “We really wanted to capture Lydia’s newfound sense of freedom and them enjoying each other. In the animated series, Beetlejuice was more like a little pet for Lydia, and they had all these little capers and adventures together, so I think the audience really wanted to see that. From a design perspective, he’d go somewhere really different and just for that moment, he would still exist and be fine in the world.”

In the end, the song was replaced with “That Beautiful Sound,” but The Demos continue to unearth more of Perfect’s “Beetlejuice” story.

“For four or five years I was writing ‘Beetlejuice,’ and my life was reduced to just me in a room with my keyboard and my laptop and a microphone, building these songs and trying to find the world,” says Perfect. “It’s a very lonely, creative existence, but it’s one where you don’t really get to share in the process when you’re in your room and living in an imaginary world, so it seemed natural in a time when there’s no live theater that people might want to listen to this kind of stuff.”

The demos are something Perfect has always enjoyed, particularly the rough and readiness of the process. “When it comes to visual art with sketchbooks of preliminary ideas, it has an energy about it, because it’s not really supposed to be seen or heard by anyone,” says Perfect. “On one hand it’s excruciating. On the other hand, with the demos, you don’t have the pressure of having to make it polished for the public, because what you’re really trying to capture is the spirit of a particular character or an energy inside a song, so you can swing for the fences.”

He adds, “From a writer’s perspective, you don’t get to hear other people’s demos. They generally don’t release them, so you don’t know what your demos sound like compared to others. I think it’s fun to hear how things develop and change and how the writer kind of imagines the song in the first place.”

Compared to his work with the 2013’s Craig Lucas-helmed King Kong, a show, he says, was full of more anthemic and dramatic songs, Perfect preferred the off-the-wall comedic, shape-shifting elements of “Beetlejuice,” which offered a broader palette to work around, and within multiple genres of music.

“That process was so much fun, because it was a world that I could write a lot of ideas for, so I did,” says Perfect. “I prefer turning up for a job that’s funny. You spend all day laughing your ass off trying to find more and more ridiculous things to do. It’s just a joy to make an audience laugh. If you make an audience laugh, you’ve got them. With drama, I’m never quite sure if you’ve got them at all.”

When writing, Perfect utilizes multiple genres, sounds, and emotions, pulling from Bossa nova, reggae, dancehall, world, and beyond, which all pierce his compositions in some way.

“I listen to lots of stuff and it all leaves an imprint on me through the lens of whatever I’ve got going on, so all of it comes out in one way or another,” says Perfect. “I’ve been very lucky in my musical life to have done lots of different things like singing in an a capella group or classical choirs with an orchestra when I was a kid to playing in Latin and jazz bands and singing with a South African guy doing traditional Shangaan music.”

The sweet spot of writing for Broadway, specifically, is that Perfect can pull from all these different musical measures, and when he’s out of ideas, he takes a day to listen to new music.

“If you’re an artist, you generally have to pick what genre you go into,” says Perfect. “I don’t want to choose. I love all this music. I guess people could call that pastiche, but I think pastiche in Broadway is referencing other Broadway. When you’re bringing in musical styles from outside that world, it keeps things fresh, and that’s really important.”

Even in traditional Indian music, says Perfect, some elements have turned up in his music even when it’s wasn’t intentional. “Those genres of music can come into a piece of music where you’re not even trying to write a traditional Indian song,” says Perfect. “‘Say My Name’ from Beetlejuice was very much based on Punjabi music that sort of found its way in. It feels ancient, old, mystical, magical, and a little bit seductive. That’s what I really love about writing for theater, because theater music is not a style of music. It’s an umbrella under which any style of music can exist if it helps tell the story.”

Back home in Australia, Perfect is busy writing music for a Christmas project that will run at the end of 2021 or early 2022, along with pitching television and film, acting and returning to stage with upcoming solo shows during the summer at the Melbourne Opera House and the Adelaide Cabaret Festival. Even as Beetlejuice remains on hold in New York until Broadway finds its opening again, there are plans to bring the show to countries, including South Korea in June 2021.

“Hopefully Beetlejuice keeps going forward with its plans to perform in other places,” says Perfect. “I know we’re doing it in Seoul, and I’ve never been to Korea, so I would like to go since I’m getting obsessed with K-pop. How great would it be to get in a room and write with K-pop artists? Another one of my little side dreams is to write gospel music. I was brought up a Catholic, and that’s all lapsed, but I love gospel music.”

Returning home to Australia following the pandemic, Perfect admits he was concerned that he’d miss opportunities in New York City, but as Broadway and the rest of the live events industry has readjusted to the new norm of business, he feels more connected than ever.

“In a way, the pandemic sort of covered my tracks, because I was really worried that if I moved back to Australia it would kill my career writing in New York, because if you’re not there, you’re not there—out of sight out of mind,” says Perfect. “I didn’t want to lose my opportunities, but now it’s great because everybody’s Zoom-ing.”

Still parked on the bench, Perfect is dreaming up his next project—and song—with a few more hours to clock in to the workday. When he’s finished, he’ll skateboard home, then return to the park the next day and do it all over again.

“Technically, everyone can still write no matter what goes on, but there is something very weird about this time that actually makes writing very challenging because you naturally want to respond to the world,” says Perfect. “But when your world shrinks down and not much is happening in it, then it’s difficult to know what to talk about and what kind of world you’re going to be eventually putting it out in, and those things are important to writing.” 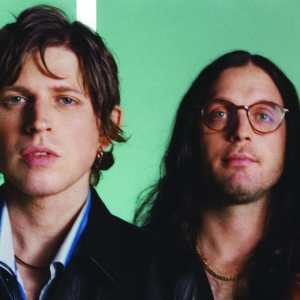 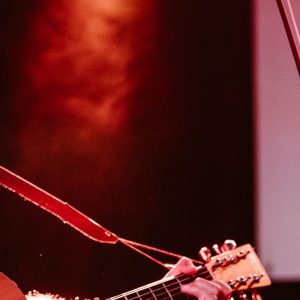