“Auld Lang Syne” is the definitive New Year’s Eve song. It is an anthem about reminiscing on times long since gone, cherishing the memories, moments, and people that have meant something dear. Opening with a building arrangement or simply a cappella, the simple, yet poignant, song demands a pause and offers a moment of reflection with every new year.

The tune has been performed by many from the Beach Boys to Bruce Springsteen. And while the sentiment remains the same no matter the musician, the classic is given a fresh take with each new attempt. Here are 10 of the best “Auld Lang Syne” covers ranked.

Christmas diva Mariah Carey is all about holiday hits, so a cover of the New Year’s classic only makes sense. She delivers a powerhouse vocal performance, opening the tune with its usual delicacy. However, the song then explodes into a bouncing club anthem as she takes a different approach, turning the traditional on its head.

The Beach Boys’ rendition features the group’s hypnotizing harmonies, delivering a chilling performance a cappella. Mid-song, Dennis Wilson delivers a message of good tidings to fans in the New Year. It’s boyish and sweet but also layered with complex sounds and vocal textures.

Delicately soundtracked with twinkling keys, building strings, and shuffling drums, the Platters’ “Aud Lang Syne” is a soulful and original take on the age-old tune. The group’s voices mingle like a meeting of old friends and sound warm, complimentary, and heartwarming.

While not too far off from the original arrangement of “Auld Lang Syne,” it is Ingrid Michaelson’s intriguing indie-pop vocals that add an alluring touch to the classic. Her words are soft and bright against a backdrop of steady piano and subtle strings.

James Taylor’s version of the song has an incomparable lightness that flutters throughout. Somehow, he gives the already airy tune even more weightlessness. Playing in the background is a number of different sounds and rhythms, but his voice never falters.

In Barbra Streisand’s live rendition, she gives a brief history and meaning behind the classic song before going into “Auld Lang Syne” with subtle theatrics. She stretches each word, softly, but steadily wringing from them as much emotion as they will allow.

Armed with his complex tenor, and raspy rocker vocals, Rod Stewart doesn’t stray far from the classic in his candlelit performance of “Auld Lang Syne.” His voice adds a certain edge to the moving, bagpipe-punctuated rendition.

The Pistol Annies give an untouchable a cappella performance of “Auld Lang Syne.” Their unique three-way harmonies fill the song with country textures and dreamy vocals for a striking rendition against the silence.

Live at New York’s Nassau Coliseum in 1980, Bruce Springsteen’s riotous “Auld Lang Syne” followed a rocking performance of “In The Midnight Hour” as the band counted down to the new year. Words aren’t needed for this soulful version, heavy with sturdy horns and hammering guitar.

1. Guy Lombardo and His Royal Canadians

Nothing beats the classic “Auld Lang Syne” that plays at the stroke of midnight on New Year’s Day. Guy Lombardo and His Royal Canadians are behind the 1947 version that can be heard playing in Times Square immediately following the iconic ball drop. 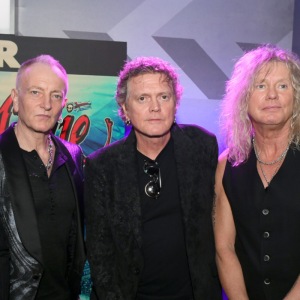