“We may feel lost at times but it can be transformative to have a loss of identity,” Katherine Abbott told American Songwriter. “The journey of self-discovery can lead to processes of elimination which can last a lifetime. It’s good to trust your inner compass to steer you in the right direction.”

For Abbott, that inner compass has been a phenomenal navigator. A local to Stratford-upon-Avon, she started her music career as a busker and has always followed whatever inspired her. Now, after building a following throughout England, she’s gearing up for a tour in 2021 by releasing an array of new tunes — one such tune is “Wayward,” which officially drops on July 1.

“Retrospectively, the lyrics in ‘Wayward’ sum up a period of time where I was experiencing a new sense of freedom after a relationship ending and moving to a new city,” Abbott said. “Funnily enough, I wrote it in one go during a car journey from the Lake District to Birmingham, squashed into the front passenger seat! The song is written in an alternate tuning I came upon through just playing around, which I think is part of the reason it came out so spontaneously. It was one of those blessed and rare occasions where I don’t have to put a lot of thought into the writing process and the words and music unravel from me in one go without having to coax them out so much. I think the song touches on topics of escapism and trying to work out a balance between one’s pursuit of dreams whilst trying to stay grounded in the immediate reality. Also finding oneself at a crossroads, trying to navigate a change in destination due to altering circumstances and self-discovery.”

“I recorded the song with my long-term producer and engineer, Jonathan Fletcher, in his studio in Stratford-upon-Avon,” Abbott said. “We laid down the guitar and vocals separately and then worked out the harmonies. We then spoke about the landscape of the song, brainstorming other instrumentation ideas and I asked Jonathan to perform a guitar solo. The song was recorded almost immediately after writing it, which I think is why we managed to capture a certain sense of rawness and spontaneity.” 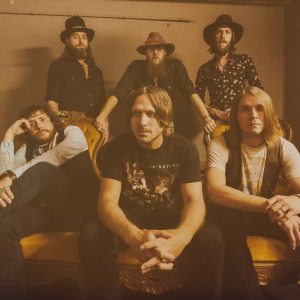