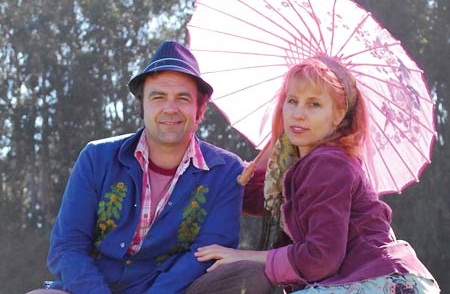 Alzara: In the early days when we first met, Gerry gave me a handheld cassette recorder to document my ideas throughout the day. I make up songs all the time, but I’m terrible about remembering them or documenting them. Gerry speculates that many great songs have been lost while washing the dishes, petting the cats, or simply feeling the blues, because no one was around to record them. But that’s also the beauty of it—music in real-time is often temporary, like all things in life.

I must have been feeling especially forlorn and love-sick one morning when I wrote this little poem called “Aching Eyes.” I sang the words and improvised a melody on the spot into the tape player. It ties into the idea that when we go through breakups, we feel a weariness. Our eyes ache with longing and regret as we see love crumble bit by bit.

Gerry sifted through the songs a month or so later and that one stuck out for him. He changed a few lines here and there and created chords to bring it to life.

Its song structure caught my eye: verses and a bridge, but no chorus.

Alzara: I’d say we’re fairly attuned to regular songwriting structures. However, we see no reason to keep using the same formula if it’s unnecessary. I grew up listening to a lot of musicals and that has definitely influenced my songwriting today. I also went through a shoegazer phase and admire many artists who explore less traditional ways of creating songs.

Describe a typical song collaboration between the two of you.

Gerry: Often I will leave Alzara “riff tapes” for her to work on. We share some phone calls and emails regarding ideas. We started making music one day when I came to the table with a catalog of my originals—sort of “American Music” songs. Her sensibilities were a breath of fresh air. Soon we were doing stuff that sounded like Gershwin meets Zeppelin. She would have these great melodies evocative of a different era and I knew my way around the neck fairly well with jazz chords, open tunings and such. As we said before, a lot of the songs are improvised and fine-tuned later.

Alzara is the best improvisatory songwriter I’ve ever worked with, and I’ve worked with a few people that are well respected. She comes up with melodies that I would never come up with. It’s not in my vocabulary, or vocal skill level.

What other kinds of songwriting success have you had?

Gerry: I had a couple of licensing type placements on MTV for a few of their shows. I had a song called “Shine,” which we do in the Sugarplums. That song was on the demo that got Priscilla Ahn signed to Blue Note, and a few friends of mine (Barrie Maguire, Ian Cross) almost placed it with Jessica Simpson. At the time they were engineering her record, she was going for a Norah Jones/country-jazz approach, which the song is evocative of. She heard it, loved it, but then two weeks later she split with her husband and her career was put on hold. When she came back she did a dance record. It’s so hard to break in to any kind of songwriting career when you aren’t very good at the networking angle.

Is there a subject you haven’t written a song about but would like to?

Gerry: I think in our fast paced culture, short, mantra-like songs are going to become more prevalent. I have a few ideas in that realm with a positive message.

Alzara: Honestly, I’m drawn to melody first and foremost. It’s a language anyone can understand, whether you are 2 years old or 92 with Alzheimer’s. Funny to say that in a lyric contest, because of course there’s nothing like great lyrics too. For myself, I’m often intrigued by words that offer some unique observations on life, like great novels, or that instill some delicious tidbits of philosophy into an infectious hook. Before you know it, you’re singing along.

If you could successfully place one of your songs with a contemporary recording artist, who would it be?

Alzara: I would love to see our music placed in films. There’s a certain dreamy nostalgia in many of our songs that would lend itself well to a good indie film. We’ve been told many times that our music should be in movies.