Australian-born musician, Jules Crommelin, started early. The future co-founder of the Byron Bay-born and Berlin-based band Parcels says it’s one of the things about which he’s most proud and happy, that he found his love of music by six years old. And because of an early investment in the craft, he’s now adept and innovative with the art form now.

Growing up, Crommelin’s mother and her then-husband had a big vinyl record collection and the music would spill out into all the rooms of the house from the various speakers set up for total surround sound—everything from Steely Dan to David Bowie to Al Green and Rodriguez. Today, his band’s new forthcoming LP reflects both a wide taste in music and a deep love for songwriting. The double album, Day/Night, drops Friday, November 5.

“I feel like I was very lucky,” says Crommelin, “in the fact that I started very early.”

Crommelin remembers first plucking a guitar around three years old. From then, he was in love. He just wanted to play music. He knew sincerely down to his bones that he was going to be a professional musician. He says he never had a “plan B.” In fact, music fueled him and strengthened him when he was at his most vulnerable.

“I think I used being a musician as a bit of a weapon,” he says. “I was majorly bullied through primary school. I had a really hard time through school. I was quite shy and a small kid.” He adds, “I used music like this thing—I had this smugness about it. I knew I could do it, so it was a weapon for me. I don’t know if I accepted anyone saying, ‘Oh, you’re not going to become a musician.’ I remember feeling like, ‘You have no idea.’”

Prior to Parcels—a five-piece band that formed in earnest in 2014— many of the members were in other bands. Crommelin was in a metal band at the time. Others were in folk bands and funk bands. But when the members got together to form Parcels, Crommelin says, everything fell into its proper place.

“Everything just kind of clicked,” he says. “It just felt right. Like, this works.”

At its core, Parcels was to get people moving. Crommelin says he and the group are squarely interested in dance music, the hypnotic stuff that almost puts people in a trance. But Parcels isn’t necessarily the thumping, boom-boom-boom that club and techno songs offer. They go at the aim in their own way, smooth and silky. Like a familiar voice in your ear. After six months of playing together, the group moved to Berlin, Germany, where they remain based.

“We went to a club the other weekend for the first time in maybe three or four years,” Crommelin says, “and just was so blown away. It was an amazing night, such good music. For the first time, I really appreciated techno and dance music.” He adds, “That consistence and the idea of just having the same thing over and over, repeating—that’s what we’ve been chasing.”

Crommelin calls it the feeling of “ecstasy.” And while drugs can be associated with it, that’s not what he’s after. Instead, it’s almost music as a drug. In that healthy way music can be. When Parcels got together, they wanted to be “groovy,” Crommelin says. And in keeping to these touchstones—groovy, dance-inducing—the band is simultaneously free to experiment, refine and find its collective voice.

“We’re starting to find our voice,” Crommelin says. “It’s been a journey to this point.”

Steps build on one another. Just as Crommelin’s early entry into music has led to his production prowess today, each step that Parcels has made along the way has led them to this moment. The band takes steps as much as it sheds intellectual dead weight. And like many bands, the recent COVID-19 pandemic allowed the group to slow down, reflect and write.

“I feel like we can learn from history,” Crommelin says, “and we’re trying to. We’re in this movement now of breaking down the barriers of this manly toxicity and this whole movement of being mindful and being vulnerable.”

These factors all play as points swirling in and around the band’s new album. In fact, each of the songs served as almost a series of group band therapy sessions. From standouts like “Theworstthing” and “Shadow” to the hit “Somethinggreater,” it was all about talking through the subject matter, settling into it, collectively.

“Patrick [Hetherington] and I would write a song,” Crommelin says, “but then we would bring it to the band and we would talk about it and bring everybody into the feeling, which was a strange but great exercise. It was like group therapy.”

For Parcels, which also boasts the distinction of having worked closely in the studio with the famed group Daft Punk, the future is bright but also unknown in the way that everyone’s future is precarious and uncertain. The band hasn’t played a “proper” gig in a year-and-a-half and the group is aching to get out. That feed loop, that symbiosis with the audience— Crommelin and company have missed that. For the artist, music is all about movement.

“What I love most about music,” Crommelin says, “is the fact that it can transcend you. It sends you to a place that’s kind of other-worldly. It’s in a way an escape and also a settling into your own body at the same time. It takes you out of yourself.” 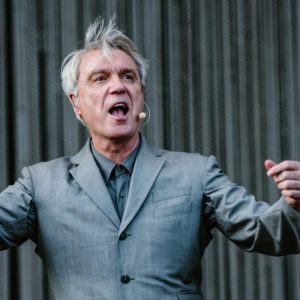