There is no set path for Elle King to follow. She’s instead paving her own—one that connects her rock roots to her developing country twang.

Developing might not be the right word, actually. Given that in just a few short years she’s clinched No. 1’s on country radio—namely the record-breaking “Drunk (And I Don’t Wanna Go Home)” alongside Miranda Lambert (the second only female duet to reach that precipice, mind you) and her debut single with Dierks Bentley, “Different For Girls”—the way we see it, King is standing firmly on the country frontlines.

In 2018, King was slated to play the Pilgrimage Music and Cultural Festival in Franklin, Tennesee but her set was ultimately rained out. In 2022, however, the velvet-voiced singer got a second shot at playing her quasi-hometown festival after moving back to the Nashville area earlier this year.

Ahead of her set on the main stage, King—as laid back as No. 1 country artists come—was hanging out backstage, never straying far from whatever was in her blue solo cup, dripped in turquoise jewelry and glitter in her slicked-back hair. Her appearance alone lets you know King is both here for a good time and that she wouldn’t mind making a lasting impression along the way.

While the crowd started filing in to watch her impending performance, King told us all about playing the fest, her move into country music, and how she feels she’s changed as an artist.

“This is my second attempt at Pilgrimage,” King tells American Songwriter. “It’s so beautiful and I know a couple of people who put it on and they’re all really lovely people. I’ve recently moved back to Nashville, so it’s nice to get to feel like I’m playing a home fest.”

King was in good company this year with billing that boasted the likes of Brandi Carlile, Chris Stapleton, and John Batiste among others. When asked who she was most excited to see, she chose the legendary Marty Stuart, who went on just before King on the main stage.

“I’m excited to see Marty,” she says. “We played a show in the middle of nowhere in Ohio with him. I was so nervous. I hope he hears my set. I will be less drunk than I was then.”

For King, Pilgrimage acted as another indicator that a seat had been pulled out for her at the country music table. King was first launched onto the world’s stage in 2015 with her debut album, Love Stuff. The lead single, “Ex’s and Oh’s” was a familiar face on both the rock charts and top 40 radio.

For many artists, the sort of success that “Ex’s and Oh’s” generated would lead to an “if it ain’t broke” mentality. For King, however, she decided to do the unexpected and forayed into country music in 2016 with the help of Dierks Bentley and a song called “Different For Girls.” Ever since, she’s been reigning in both genres.

“I feel like moving back here and getting to play at Pilgrimage on the Main Stage, are really deepening my roots in country,” she says. “It’s been a very interesting ride coming into country music. Bentley showed me this country world that was like nothing I could ever imagine. I just owe him so much gratitude because it changed my life. I felt like I had to fight so hard in the pop world, so country has been the most freeing experience. I can just be myself.”

She continues, “I now know why people want to come to country music. If you should be so lucky to gain the trust and the loyalty of the best fans in the world, the country music fans, you can have an incredible, lifelong career if you don’t fuck it up.”

King recently teamed up with Bentley again with a much more upbeat track than their last pursuit, “Worth a Shot.” Currently climbing the charts, the song further cemented the magic King feels like she finds with Bentley as a song partner.

“Something happens when me and Dierks are together. Ever since I got into country in general, I’ve thought ‘oh my gosh, you can enjoy what you do?'” she quips.

King and Lambert made history last year by being the second only female duet to hit No. 1 on the country charts. Reba McEntire and Linda Davis did it first in 1993 with “Does He Love You.” The acclaim has been overwhelming at times for King.

“I’m so meticulous about stuff so I don’t always get a moment to step outside all of this and look at the glory of it,” she shares. “It’s so important to take a minute to appreciate and be proud of yourself.”

Her set at the fest was, as she remarked, about celebrating “having fun in all types of ways.” She brought “Drunk” to the main stage, much to the crowd’s approval, and even harkened back to the earliest days of her career with “Ex’s and Oh’s”—a track she still “loves to play.”

From hard-edged rock to bluesy country riffs, King does what she wants when she wants—not that anyone is complaining. You can’t guess what she’ll do next. You just have to wait and see. But, if history serves, she’ll be well worth the wait when she comes around. 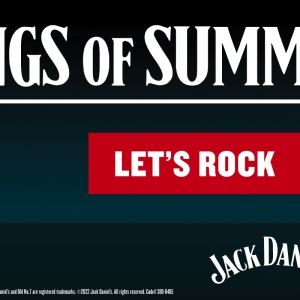