The Rode NT5 is a small diaphragm condenser microphone available either as a single mic or, more typically, as a stereo pair. Stereo pairs are most often microphones with sequential serial numbers, indicating that the manufacturing of each mic is as close to identical as possible, and thus the microphones will function as similarly as possible. The advantage comes in the ability to use stereo microphone techniques. We hear with both ears, so it’s logical that if you could record a sound using two microphones (using the proper technique), you could capture a more accurate representation of what you’re hearing, right? The NT5’s small capsule (a gold spattered diaphragm in close proximity to a metal backplate) is a great choice for acoustic instruments and drum overheads, as well as live recording, due to its fast transient response. The NT5 features a full frequency response and reproduces brilliant high end without ever sounding brittle or harsh. Included with the stereo pair are a carrying case, mounts and windscreens, which are particularly useful when using the mics for live concert or field recording. A stereo bar would have been a nice addition to this package, but can be picked up relatively inexpensively.

This review is part of “The Art of Home Recording” feature in the March/April 2010 issue. 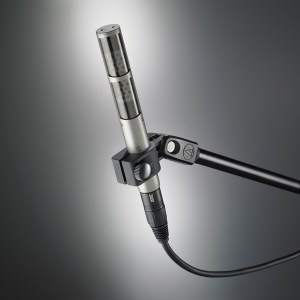