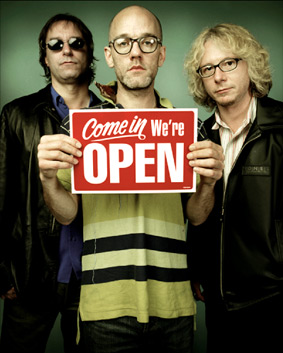 R.E.M. fans have been patiently awaiting the release of a new album since 2008’s Accelerate. A hotly anticipated double live CD, Live At The Olympia, is due out this fall. In the meantime, the Athens, Georgia trio will whet our appetites with Reckoning Songs From The Olympia, a live EP consisting of four tracks from the band’s 1984 sophomore album, Reckoning.

Captured over the course of a five-night stint of “working rehearsals” at Dublin’s Olympia Theatre in July 2007, the record combines the immediacy of playing off-the-cuff live licks with the nostalgia of revisiting old tunes. Rolling Stone called the show a “visceral, open rehearsal” that takes on “a resurrection fervor.” Awarding the band’s residency a rare five-star review, Q magazine elaborates, “Eleven new songs are played each night, while the remainder are a changing complement of oldies that pointedly contextualize the virgin material.”

Available through iTunes and all digital outlets July 7, the EP includes “Harborcoat,” “Letter Never Sent,” “Second Guessing,” and “Pretty Persuasion.” Live At The Olympia’s track-list has yet to be released. Fans will have to endure the agony until this fall; but hey, “Everybody Hurts.”