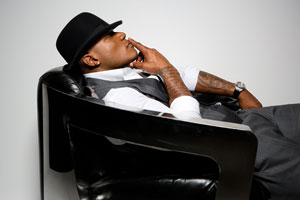 Sean “The Pen” Garrett, 31, is one of Hip Hop and R&B’s brightest stars, but you’re forgiven if your unfamiliar with his visage. Garrett has been mostly content to write and produce hits for others (such as Ne-Yo, Fergie, Mary J Blige and Beyonce). And he’s been doing a kick ass job of it; he’s currently ranked fifth on Billboard’s list of producers with the most hits. Now it’s Garrett’s time to shine, as he’s got a new solo album, Courtesy Of, in the can, and a star-studded mix tape, The Ink Well, that just hit the streets.

You’re earned the nick name of “The Pen.” Do you actually write with pen and paper?

How did you start out?

I moved to Europe when I was five because my dad was in the military, and so I actually grew up in Europe and I signed my first record deal when I was fifteen years old. My mother died, like six years ago, so I moved back to America to kind of work out a deal with Warner Brothers. But my deal fell through. A lot of people were like, we love your songs, is there anyway you could write songs for other people as well as yourself? I was kind of apprehensive about it, because I never really looked at myself as a songwriter, I just looked at it as someone who created records for myself. I was like, that’s not really what I want to do, but eventually my mother died and I came back to the states and I was like, 21. It was a huge, transition in my life, and it just opened my eyes to a little bit more of a direction. My mother died for a reason, and all of the things that she taught me, it was time for me to grow up and take on the world, and take over the blessings that I was gifted with.

So I moved back to Atlanta, with five or six publishing companies trying to sign me, and I wound up signing my deal with HITCO Music Publishing, which is LA Reid’s publishing company, and my second release three months later was “Yeah” by Usher. I did that for him, and then all hell broke loose. My third release was “Goodies” with Ciara, and seventeen number ones later, forty-two top tens later, six years later, here I am.

Did you have any apprehension about wanting to be a performer versus being a songwriter?

I actually was a singer/songwriter, so my definition was an artist and writing songs was just what I do, and it wasn’t something that I was entitled to do. When I lost my mom, it was just a whole different mindset, and it was like I have more to do, like God had told me that I was going to be really big if I just followed his word and followed my dreams, and that’s what I did.

Besides writing, you’re also a producer. Is there one that you like better?

They both go hand in hand. Writing, producing, performing, is to me, pretty much all the same thing because it’s just being creative. I mean, I love performing, I love producing and songwriting as well, it’s just what I need to do to be able to exist because I’m so creative and I’m always to outdo my last song, I’m always trying to bring something new to the table. That’s just what I feel when it comes to my creativeness and my role in the music industry as a legend.

How are you able to write so many number one hits?

I would definitely say it’s my passion and the emotional side, and being able to stay focused. Losing my mom really motivated me to just be everything that she wanted me to be, so every time I come across an obstacle in my life, I just think about my mom and go harder, and this time it’s just, “we will not lose.” That’s the mentality, I just will not lose. I feel like the fans deserve so much better music, and I’m always trying to push the button in different areas whether it be pop, or R&B, or urban, whether it be rap or hip hop, or international music.

What are some of your favorite tracks that you’ve written?

Of course “Yeah” was one of my biggest ones and that’s probably one that’s one of my favorites. “Is She the Reason” is a record that I really loved, that I did for Destiny’s Child. I love a lot of the stuff that I did for Beyonce, like “Diva.” I love some of the stuff I did for Mary J. Blige, “No More Crying,” “Good Woman Down.” I love Enrique Iglesias’s record that I did for him that was the biggest Latin record in Billboard history, as far as Latin is concerned; it was like number one for thirteen weeks. I enjoy all of them that I created, it’s a beautiful array of feelings and emotions and I look at everything that I do as a blessing to be able to do it.

It’s a very emotional type of process, depending on what my mood was like at the time has a whole lot do with where I come from with the music. Most of the time I’m in a loving mood, but if I’m feeling aggressive, if people have been pissing me off, then I’m going to make up tempos and make people dance. I love to make people dance, it’s how I take the energy if somebody gets me a little upset, or if I feel challenged or something like that — then I go in and really take time to find a really incredible up tempo beat and make a really great up tempo club record. I take all the emotions of negativity and turn it into something positive.

When you’re writing, what do you draw inspiration from?

How did you end up writing “Yeah?”

The idea was that I wanted to give Usher a record like “Thriller,” because I heard a lot of the records that they were doing, and I felt like they were some really good records, but I felt like he didn’t have that “Thriller” or that “Billie Jean,” so I wanted to give him a record that I felt like was so dynamic and had the ability to crossover all over the world, but at the same time have that urban connection that people in American could definitely relate to as well.

With “How Do You Sleep” for Jesse McCartney, was that something that you wrote with him in mind?

It was definitely something that I wrote with him in mind. At that time he and his A&R came to the studio was like, “you know, we need a smash record for Jesse” and they wanted to give him something that they felt like was definitely relate-able. But it was scene that most people would feel, so “How Do You Sleep” was like a question that I would ask to a girl, like, “how do you sleep without me? How do you go through life when you know how much we care about each other and now that it’s over, how do you sleep?”

How about Ciara’s “Goodies?”

What happened was I wrote “Goodies” in the studio and Ciara was asleep. She was such a, like my little sister, such a baby. At that time, she was like, sixteen years old. I actually wrote the record in the studio and recorded it, and she wanted to change a few words in the song, so she called me and was like, “Sean, I think we need to do this…” “No, Ciara,” “But don’t you think that…” “No, Ciara.” She always wanted to be very involved in her music, but it was great, I changed a few words for her and kept in moving. That has a lot to do with, you have to have the ability to relate to the artist and give in sometimes even though you don’t want to give into them to a certain extent.

When you’re writing a song that’s got more of a pop bent to it, how is that different from writing rap or hip hop?

I’m from the hood, but I grew up in a pop world, so it’s really like I have the best of both worlds. My pop experience has been very, very good to me and gives me the ability– I naturally do pop music, that’s just what comes out naturally, and my tone is more of a pop voice, so it helps me out a lot. With my influences, Michael Jackson is probably one of my biggest influences, and it’s not hard to have a pop feel when you came up under that regime.

For your sophomore release, you’ve got this upcoming album, Courtesy Of.

SG: Courtesy Of is coming later on this year, right now we’re putting out my mixtape album which is called The Ink Well, it comes out and I’m really, really excited about it, it’s got a crazy amount of great features on it– Lil’ Wayne, Drake, Nicki Minaj, Yo Gotti, Bun B, Soulja Boy, Fabolous, and it’s hosted by my man DJ Green Lantern, it’s ridiculous, so I’m really excited about that. The Courtesy Of album is on the way as well, coming later this year. I’ve got a lot coming out, I’m doing a lot internationally as well, so I’m really excited.

As far as Courtesy Of,  you’ve mentioned how it’s been an emotional roller coaster for you.

Who is an artist that you listen to that might surprise people?

Probably Lykke Li, Lykke Li is the one that I really, really love. I love her voice, I think it’s incredible and I would love to do a record with her. I love what she does.

What do you see as being next for yourself?

Basically what’s next for me at this point I feel like, after more Grammys, and just working on bigger albums, breaking new artists, breaking myself as an artist, doing a new label deal, just being a staple and doing more, just being out there in the forefront, just being a leader and leading my generation to the next level in music. 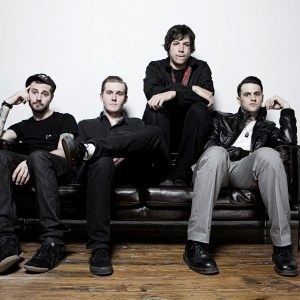