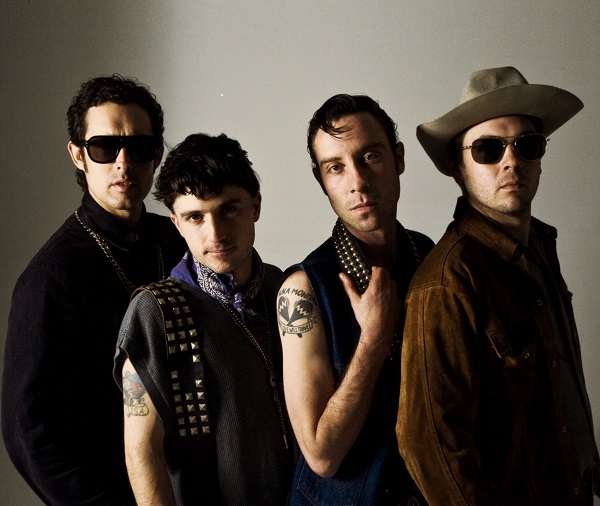 Black Lips, garage-rock’s most notorious bad boys, will release Underneath The Rainbow on March 18, their first album in nearly three years. Much of the record was produced by Black Key’s Patrick Carney, at his Nashville studio.

“I was thrilled to work with the Black Lips,” Carney said of the experience. “I’ve been a fan for a while and wanted to stay out of the songs as much as possible, but I did want to help streamline the arrangements a little and open up the fidelity. We did eight songs together, and basically with the exception of two almost straight-up punk songs Joe [Bradley] brought in,  no two songs have a similar sound. Also, those guys are some of the funniest people I’ve ever met.”

We chatted recently with bassist and singer Jared Swilley about the new record, the band’s life-changing Middle East tour, and the secret to their longevity.

It is true the band initially tried to get Phil Spector to produce the album?

Yeah, I didn’t really know about that. That was Cole [Alexander’s] idea because he had produced his wife’s album from prison. It would have been cool for that to happen, but that seems like a nightmare project to do. But on the last album, Arabia Mountain, Cole, or someone at Vice [Records], had talked to Charles Manson and tried to see if he wanted to write some lyrics and stuff. I didn’t find out about that until we already learned it wasn’t going to happen.

Brian Wilson was a fan of Manson’s music.

The Beach Boys recorded one of his songs, and he has a few that are pretty good. We covered one of his songs a few times on radio and at in-store performances. So yeah, he did have some cool songs, but he’s insane, so …

Patrick Carney of Black Keys produced a lot of the tracks of the album. How did you get hooked up with him?

We were going to do it with Mark Ronson again, but his schedule’s crazy and ours was too at the time, and at the last minute we were about to go to London and then he wanted to push back recording a little bit. But we were itching to get in the studio and it just so happened a week or two later we were playing a festival in Mexico City and Black Keys were playing and  we ended up partying at the hotel. Patrick was like, “Oh, I’d love to produce some tracks.” I thought it was just late-night talk but we called him back on it and he was down to it.

How does the band decide which songs make the album?

We’ll record every song that everyone has and put them all together, but everything’s voted on. We ask friends or management or people at the label to see what they think, and they’ll check in. We kind of whittle it down from there. Usually, it comes down to a really, really long e-mail thread that takes a few weeks of voting. The democratic process slows things down, but that’s just the easiest way to keep things running smoothly and keeping everyone happy.

In terms of the songwriting, do you feel any sense of competition with Cole or Ian [St. Pé]?

Oh no, not at all. In fact, I prefer it when we collaborate. When I bring a song out I’ll give the most basic structure and be like, “Well, here’s the basic idea, what should we do with it?” Because I always feel like people bouncing ideas off each other usually produces the best result. So, no competition at all.  We don’t even take individual songwriting credits for any of our stuff. It’s all split four ways equally so no one would even know who wrote the song unless you ask one of us.

The Middle East tour seems to be an important chapter in the band’s story. Did it change any kind of grand design for the band?

I wouldn’t say in terms of how the songs are or anything, but I know it definitely changed our outlook on pretty much everything. We kind of look at ourselves as a world band. I think in subtle ways it’s probably influenced us a lot, but I can’t put my finger on any exact thing.

Did you feel like diplomats when you were playing over there?

I don’t want to sound like a world diplomat, but I just felt a responsibility to show a better face of what they might think of as Americans over there, and was definitely conscious of that the whole time. Everyone was more than nice to us over there, and there was never any political discussions or anything. They know we’re just a rock band over there doing our thing, and we’re playing over there just like we play in Florida or France.

The only time anything got political is in Jordan a couple of promoters pulled out from the shows because they found out that we had played Israel before. This student group was threatening to picket the show and tried to start a boycott, but we invited them to dinner to try and explain it to them. We’re like, “You know, we’re going to Israel the same reason we’re going here, to play shows for kids that want to go to a rock and roll show, and it’s as simple as that.”

Did you have a favorite show from the Middle East tour?

My favorite show was probably in Iraq because we were supposed to play a big show in the town square that the Ministry of Culture set up, but they cancelled it at the last minute after seeing our YouTube videos. But we went anyway because we already had the plane tickets and visas.

So we just went and there was some girl from England that was a fan of ours that set up this last minute show at the community center. We didn’t have amps or a drum set, so we just plugged straight into the board as a PA. It was really cool, and it was a really small show. It was all a bunch of families and old people and ladies and little kids and there were the teenagers that were there were up at the very front kind of moshing, but doing it weird. They’d never been to a show before so they didn’t really know how you’re supposed to act. So that was really cool to see, and it was really heartwarming. And just the fact that when we got there, I was like, “I can’t believe we just got into Iraq, and not in the Green Zone or anything.”

The band’s been together for 15 years. What’s the secret to your longevity?

Well, we all grew up together, and when we were kids we made a pact, and we had some rules and goals that we set. One of the main rules was:  don’t have a fallback plan. Because if you have a fallback plan you’ll fall back, and you won’t work as hard. We were real determined, since we got  kicked out of school together and had teachers be real unsupportive and tell us we were going to be losers and everything.

We don’t let egos get in the way, and that’s why all the money’s split evenly, and all the credits, and everything like that. That just makes it easier, because fighting with your friends over money is just dumb. We just all have the same vision and the same goal, and I guess that can be pretty hard to find, to get a group of people that can tolerate each other for that long. It’s been years since we’ve had a fight. I mean sometimes if we’re all drunk and have been on tour for a few weeks and are super-tired, and it’s a late night, someone will say a “fuck you” or something like that, but it’s always kind of funny. It’s never super serious.

Do you still have plans to play Antarctica, which is the only continent you haven’t played yet?

We’re kind of giving up on the Antarctica thing. We were really close, and were about to do it. We had found the right sponsors and everything, and had found a place to play. But literally right before we were about to really go for it Metallica came out and did there stupid thing down there, so now we wouldn’t even be the first band to play all seven continents … And I had actually found out about it through one of the guys in Mastodon. They know Metallica and have toured with them before. He texted me, and I thought he was messing with me at first, he was like “Metallica’s beating you to Antarctica.”

Black Lips have always been known as an Atlanta band. Has the city been a nurturing place for you guys?

I’m very much an Atlanta person. I live less than a quarter mile from my great grandfather’s church, and my whole family’s here. I would never leave Atlanta. I recently lived in L.A. but I realize now I wouldn’t ever live outside the South and probably won’t ever leave Atlanta again. I think it’s nurturing because it’s easy to get by here. I couldn’t imagine living in New York or San Francisco and trying to be a starving band there, paying rent and having a job.

Are you pissed about the Braves moving to Cobb County? The band has been a big supporter of the team through the years.

It’s worse than being pissed off. It’s like when you’re a kid, and you get in trouble, and your parents don’t even get mad at you, they’re just really disappointed. That’s way worse. I wasn’t even pissed, it was just beyond that.  I was nine years old or when the Braves went from worst to first. I have a lot of emotional attachments to that and remember where I was during a lot of plays and all those players and everything. I woke up one morning, and [their decision to relocate] was the first thing I read. I just couldn’t believe that they could do that. I love baseball, but I won’t support the Braves anymore. I had some tickets for next season, but I’m not even going to use them … I just wish they wouldn’t keep the name the Atlanta Braves. They’re not in Atlanta. The Braves are dead to me. 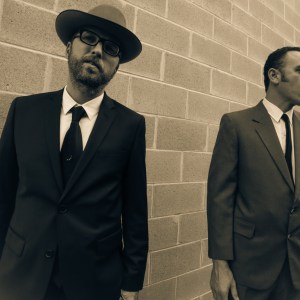 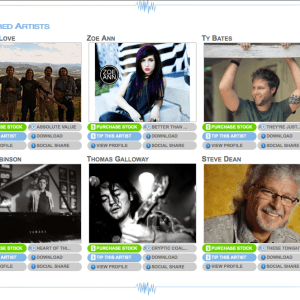