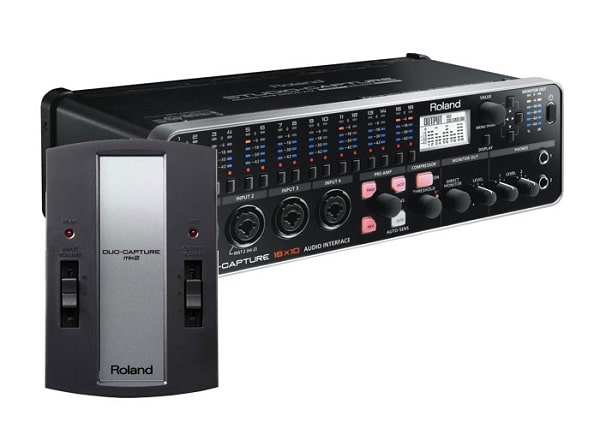 Usually, before I use a piece of equipment, especially for an on-location recording session, I like to really dive into it beforehand. As most anyone would, I find it better to be very familiar with every piece of gear I’m using before I use it in the field.

Leading up to our recording session with Robert Ellis, I wasn’t able to put the Roland Studio-Capture through its paces beforehand, which meant that the session was going to be the acid test. Being extremely compact (just over 11 inches wide) for all the features it offers, the Studio-Capture was the perfect size to stick in a bag with a laptop and few mics for the session. For our session, Robert sang and played one song on guitar, and the other on piano. We set up the Studio-Capture, which connects via USB 2.0, to a MacBook Pro running Logic. The Studio-Capture sports 16 inputs and 10 outputs, with 12 of those inputs being microphone pre amps, so we were able to set up for guitar, piano, and vocals, and switch between the two setups as needed without having to reset everything.

The Studio-Capture saves space by eliminating physical controls for each input and replacing it with one assignable input control, and another control for phantom power, low-cut, phase, and compression.  Aside from the digital metering on each input, right on the front of the unit, the ability to compress each input pre-tape is one of the more impressive features of the Studio-Capture.  In fact, the onboard DSP allows for some other handy uses, like adding reverb to any of your 4 individual monitor mixes during tracking.

The monitor mixes offer zero-latency, and like most everything else on the Studio-Capture, can be controlled either from the unit, or through the included software.  Having become accustomed over the years to using the individual trim/gain knobs to adjust the input level of each input, I initially found the process of selecting each channel, and setting the input to be a little cumbersome, but then I discovered the brilliant “auto-sens” feature.  Basically, it works like this – just plug in all your instruments, microphones, etc., and start playing.

With auto-sens engaged, the Studio-Capture automatically sets the optimal input level for each source.  Then you’re ready to go.  It’s still useful to have the software up so that you can adjust levels on the fly during a session, but for getting started quickly, auto-sens is a great tool.  The Studio-Capture is ideal for studio or live recording, and can be expanded to double the inputs when combined with another Studio-Capture, allowing for a huge I/O in an incredibly compact and versatile unit.