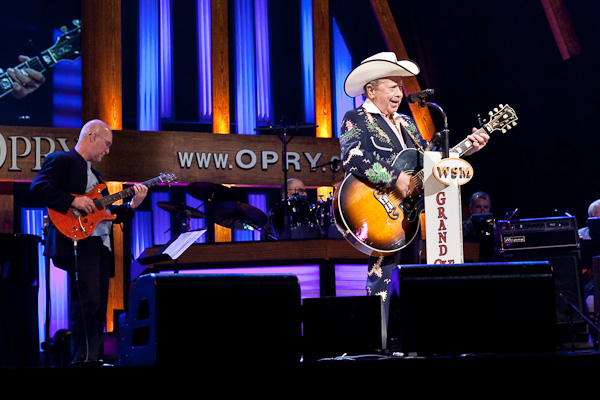 The Grand Ole Opry is “the show that made country music famous.” Established in 1925, it’s been entertaining Nashvillians, out-of-towners and late night radio listeners for decades.

I had the opportunity to head out to the Grand Ole Opry House this Saturday, to see, among other things, the legendary Connie Smith work her golden voice, Wynn Varble make his Opry debut, Billy Dean sing with his lovely daughter, and Elizabeth Cook belt Hank Williams tunes.

At age 50, Varble, who recently competed on CMT’s Next Superstar, was a little late in making his Opry debut. But the guy clearly belonged there, cracking the audience up with his takes on the weather (“Hot”) and familial relations (“If It Ain’t One Thing, It’s Her Mother.”) The only one funnier was Little Jimmy Dickens, the 90-year-old country icon, who, let’s be fair, has had more time to work on his material. Dwarfed by his guitar, and clad in an ornate suit, the diminutive Dickens sang “May The Bird Of Paradise Fly Up Your Nose,” but mostly stuck to telling jokes. “Doctors are always telling you to eat more fiber,” he grinned. “I said to mine, “Doc, I already I ate so much fiber, I passed a wicker basket last week.”

The show kicked off with Connie Smith, who’s currently supporting her new album, Long Line Of Heart Aches. Dolly Parton once said of Smith that she was one of the three best female singers in the world. Smith sang a song she wrote with her husband, Marty Stewart, entitled “Pain Of A Broken Heart.”

Feisty singer-songwriter Elizabeth Cook, who’s had a strained relationship with the modern country music market, kept things traditional, choosing to sing Hank Williams’ “I Can’t Help It If I’m Still In Love With You” and Parton’s “Old Flames Can’t Hold A Candle To You” (a song co-written by Pebe Sebert, the mother of pop star and Nashville native Ke$ha.)

On the bluegrass side of things, Michael Cleveland & Flamekeeper and Jesse McReynolds wowed the crowd with their instrumental prowess. Elsewhere, The Whites, an award winning father and sisters act, preached the gospel, and the Opry Square Dancers revived a long lost art. Whispering Bill Anderson, an Opry regular since 1961, performed his moving song about the soldier who keeps a deck of playing cards as a substitute for a Bible. And Michael Doucet, on loan from the National Folk Festival happening downtown, helped bring Zydeco to the Opry.

Country star Billy Dean sang his hit “Billy The Kid,” and then introduced his 16-year-old daughter, who complained of nerves. The pair then intertwined voices on a soulful, lullaby-esque version Hank’s “I’m So Lonesome I Could Cry” that gave everybody goosebumps. “That’s what you call an Opry moment,” quipped the announcer.

At 86 years old, The Grand Ole Opry is clearly still kicking. Next time you’re in town, and want to take part in a vibrant and storied piece of musical history, you know where to go.