Though Bonnaroo and the CMA Music Festival were in full force just down the road, leave it to Nashville’s Imogene + Willie to put together a day of music and celebration for a packed house at their 12 South store. The Nashville clothier (maker of some of the best jeans around—seriously) partnered with Alabama designer Billy Reid—winner of GQ’s Best New Designer 2010— for a special “Supper + Song” to celebrate their collaboration on a limited run t-shirt benefiting the victims of Alabama’s devastating April tornadoes.

Beneath a cloudless Nashville sky, folks gathered in Imogene + Willie’s back lot for sets by Justin Townes Earle, the Apache Relay, Deer Tick and a special surprise guest. Nashville favorite Mas Tacos, one of the original food trucks, was on hand serving up tacos and other south of the border treats, and a make-shift bourbon bar attracted visitors to the back of the lot to cool their spirits with a beer or specially-made Old Fashioned or Sazerac.

Earle kicked off the day’s music with his blend of folk, blues and Americana. Sporting pin-striped pants and a flat-top hat, the self-proclaimed “fashion freak” played solo versions of tracks from his last four records, including crowd favorites “Mama’s Eyes” and “Harlem River Blues.”

Following Earle, Nashville’s the Apache Relay played a stripped-down set of acoustic indie folk, with cuts from their latest record American Nomad and 2009’s 1988. Led by Michael Ford Jr., Apache continued the rootsy spirit of the day with tunes like “Power Hungry Animals,” “Lost Kid,” and “Blue Eyes.” The guys remarked on what the event was really all about—community—and there’s no doubt everyone in the audience was feeling the same thing. 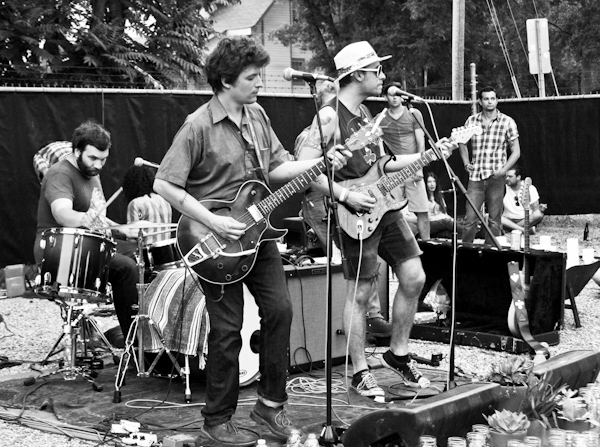 By the time Deer Tick started their set, the lot was overflowing with people and the hot summer sun was finally beginning to set. On the heels of a set at Bonnaroo, Deer Tick played almost entirely new material from an upcoming recording, throwing in a cover or two (including the wildest version of La Bamba I’ve ever heard) and a couple tunes from older records, like 2010’s “Choir of Angels.” Lead singer John McCauley, in true Deer Tick fashion, played the majority of the set with a lit cigarette resting between strings of his guitar’s headstock. As the guys were wrapping up, guitarist Andrew Tobiassen remarked that this was one of the first places the band had played where the guys outdressed the girls, and all I have to say is, welcome to Nashville, Andy.

Shortly after Deer Tick’s set, Imogene + Willie co-founder Matt Eddmenson joined Billy Reid at the mic to introduce the evening’s surprise guest, Black Keys singer/guitarist Dan Auerbach. Beneath Christmas lights and against a backdrop of candles, Auerbach played two of his solo tracks, “Goin’ Home” and “When the Night Comes” on solo acoustic to a captive audience. It was a perfect ending to a perfect day.

If I’d ever forgotten what made me fall in love with the Nashville community, this day would serve as the best reminder imaginable. 200,000 country fans might be crowding the streets of downtown, but this is what Nashville’s really all about.