When you sit 17 of the most accomplished songwriters from Nashville and Los Angeles down at the writer’s table, something magical is bound to happen. That’s exactly what industry veterans Alicia Pruitt and Katie Vinten set out to do with a three-day “Songwriting Camp,” March 2-4.

Throughout the camp, songwriters will participate in several collaborative writing sessions, connect with Nashville-based labels, and perform—perhaps a new hit song—at the end of the event.

Longtime A & R execs, Pruitt and Vinten, who previously worked together for more than 13 years at Warner/Chappell Music, always loved the community and connectivity within the Nashville writing scene, and wanted to bring another element to the mix: Los Angeles writers.

Vinten has since founded Black Diamond Management and is co-founder of Facet Records and Facet Publishing, along with Los Angeles pop songwriter Justin Tranter (Justin Bieber, Lady Gaga, Imagine Dragons). Pruitt, who previously signed Kacey Musgraves and Chris Stapleton at Warner/Chappell, launched Madfun Entertainment in 2018, in partnership with Red Light Management, and currently has Josie Dunne and Brock Berryhill on her roster.

Both always loved putting together creative sessions, so the pieces organically fit to create a songwriting camp. Above all, they wanted to create writing sessions around human connection and building community among writers without the expectation of creating something.

“We always wanted to partner on something and said we should start with a camp and build it around community and people first without all the distractions of artists involved,” Vinten tells American Songwriter. “Now felt like the right time, because we have our bearings as far as management and publishing clients and know who is good at what and who would be a good fit for this, especially for this first one.”

Throughout the camp days, labels will host daily events—pizza and trivia night with Warner Records, Universal’s bowling night, and a bar hop with Big Machine—with the final evening culminating at a Writer’s Round of performances at the famed Listening Room Cafe in Nashville.

Songwriters will be broken into groups of three for writing sessions taking place at Ocean Way Nashville Recording Studio. Set up like a normal writing session, Pruitt says each group will have a track person, producer, a lyrical writer, and at least one person that can sing.

“One of my biggest things in music that I love is the connection of people,” says Pruitt. “When you can do that, whether it’s introducing an LA writer to an A & R person here in Nashville, that was the idea behind it. Everyone can go their separate ways and maybe think about that person down the road.”

Working in publishing for years, Pruitt and Vinten knew who would work well with who. “You have to hope that this personality with get along with that personality,” says Pruitt. “You’re playing a guessing game, and you’re hoping that magic is formed in the room.”

It’s also about stripping away the expectation and pressure of expectation on both sides, says Vinten. “We want to strip away all the differences about how the business works and ‘what have you done for me lately or I’m here to write a country or pop song,’” says Vinten. ”It’s more about ‘hey I respect you. I want to know more about where you come from and your world and how you write.’ This is about connecting as human beings. Maybe we’re going to make a great song together, or maybe we’re going to be friends and refer somebody else down the line.”

Vinten hopes the camp will also open up conversations about some misconceptions in the industry, from what is considered a producer in Nashville and what is a producer in Los Angeles, or how song splits tend to work in Nashville versus LA and New York. “When info is not made clear before collaborating with one another everyone just assumes that they are going to hop on board with how they want to do things, and it’s not fleshed out,” says Vinten. “It’s like ‘hey you’re on my turf. I’m on your turf. This is how this and that works.’”

She adds, “This happens, and it feels like a one way relationship at times because the writing styles are so different,” says Vinten. “A country writer’s song may not translate in the pop world the same way, and vice versa.”

There’s familiarity and a comfort that Vinten says she would like to bring, particularly for writers coming to the Nashville “turf” from Los Angeles, so it feels more like a home away from home for the next few days. “I can offer some perspective from what I see as a manager and publisher, where I see things derailed in these relationships with country and pop writers in general,” says Vinten. “We forget that we’re all trying to do our best. Sometimes it’s the competition and lack of opportunity that prevent writers from thinking there’s room for all of us.”

Hip-Hip or pop, it’s anything goes during the no-genre sessions. “They can write a country song, an Americana song, or a pop song,” says Vinten. “If they want to write a Hip-Hop song they can. It’s about getting them to know one another on an even playing ground, despite where the camp is taking place.”

On March 4, participants will have the opportunity to perform a song they wrote for another artist, an old favorite, or something they created during one of the week’s sessions during the closing Writer’s Round.

If the first Songwriting Camp is a success, Pruitt and Vinten would like to produce it semi-annually, in Nashville and in Los Angeles. They would love to see songwriters eventually host their own, smaller one-off sessions from the connections they made at the camp.

They could have easily filled each room with big artists from country and pop, but say this group of songwriters was intentional and want to keep it tight knit where it doesn’t feel watered down or so big that it loses focus moving forward. “It’s about quality over quantity and building a community. Humans can only connect with so many humans at one time,” says Vinten. ”We hope it procures amazing results but that people connect beyond just these three days.”

In the end, it’s about having fun and hopefully making some great relationships in and out of the studio.

“I hope that this is a huge classroom for us for several days and that we take the lessons learned and apply them,” says Vinten. “Maybe a couple of hit songs wouldn’t hurt. That’s one of the things that can happen when people come together without any expectations.” 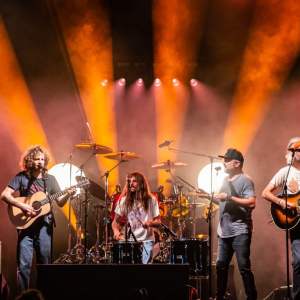 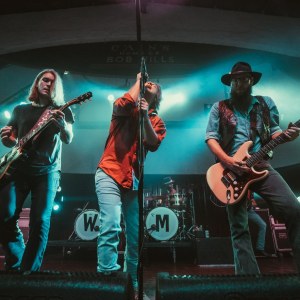