Though a full reunion of The Smiths may never be on the horizon, guitarist Johnny Marr and bassist Andy Rourke have collaborated on new music for the first time in 35 years on the Blitz Vega song “Strong Forever.” The single marks the first time The Smiths bandmates have appeared together on a track since the band’s fourth and final album, 1987’s Strangeways, Here We Come.

“This song is for the kids who are being bullied as well as people and families who are fighting battles to survive,” said Blaggers of the track in a statement. “Mental illness and depression can stem from feeling helpless. When all the odds are against you, you stand tall and take every challenge as it comes.”

Blaggers added, “Everyone is dealing with their own challenges, especially now. People have to look out for each other a lot more at the moment. We all seem to be fighting to survive, but it’s not too late. There are lots of good people on this planet who want to do something positive, big or small, it’s just hard to notice them sometimes with all the noise. But now’s the time to make some kind of difference if you can.”

The track was in the works since January 2020, when it originally featured vocals by former Kasabian frontman Tom Meighan, who later admitted to committing domestic assault and left the band. Blaggers was left to add on replacement vocals.

“Andy calls me, and he says, ‘Johnny said he’ll record some guitar on the track,’” Blaggers told Rolling Stone of how the Marr and Rourke collaboration came together. “I was like, ‘What? Johnny? Johnny Marr?’ He’s like, ‘Yeah,’ in his laid back but very Mancunian way.”

Rourke said that he specifically wanted the sound of Marr’s guitar on the track. “I wanted exactly what Johnny does,” said Rourke. “He has a very distinctive sound, and that’s what he did. We love what he brought to the track.”

The two Smiths have remained friends long after the band’s breakup in 1987 and have performed together over the years. Most recently, both appeared on stage together while Marr was on tour with The Killers. The pair performed The Smiths’ 1984 song “How Soon Is Now?” and their The Queen is Dead classic “There Is a Light That Never Goes Out” during a show at New York’s Madison Square Garden.

“We’ve remained friends,” said Rourke. “We’ve known each other since we were 13 years old. He’s my oldest and dearest friend, and I feel our friendship gets stronger as time passes.” 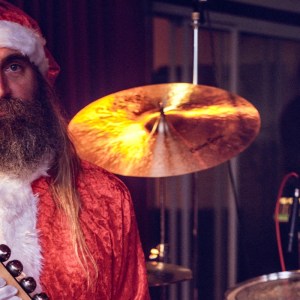