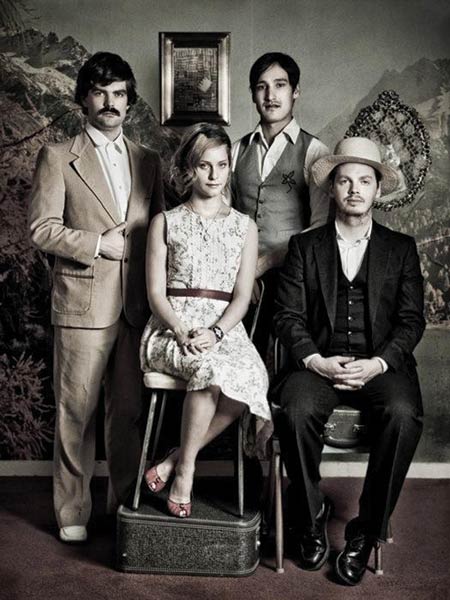 We are happy to report that, after two years of complaints from concerned neighbors and Democrats, the UTR staff’s annual Spring Bunny Fry-Up went off without a hitch this year. Afterwards, suitably chuffed and covered in rabbit remnants, we sat down at our Remington and got down to the business of reviewing records. The gamey taste on our lips had us in the mood to be pushed around a little: we required immediacy, a few aural quickies, some serious jiggery-poo. But it was not to be. All of the music was charming in a slow-burn, when-can-I-meet-your-family sort of way, but none of the discs were really grabbing us by the throat.

Thankfully, during an extended visit to the Gents, I happened to notice the new Ghostkeeper album, seemingly abandoned in the magazine basket. An hour later, I was seated at my desk, positively grooving to the fresh cassette dub that our tech guy had just handed me.

“Who left this in the crapper?” I screamed. “I love this!” I turned it up until the speakers on my Panasonic boom box distorted.

“I know,” said Kenny, hopping up and down on one foot. “It’s like the Velvets meets Grandmaster Flash meets…”

“Shut Up!” I smacked him across the cheek. “It’s like Dylan doing Black Betties with the Hell’s Angels. You moron!” I frantically shuffled papers on my desk, looking for the press release. “Damn it… what’s the name of the album?”

“Damn it!” I was scattering papers left and right, looking for any information on the band. “Where are they from?”

“Canada. Alberta, Canada,” said Kenny. I looked at him and noticed a string of rabbit meat stuck between his third and fourth incisors.

“Well, that figures.” I was suddenly exhausted. I slumped into my chair and let my mouth hang open for a few seconds. “Fine. Let’s make them famous.”

“Let’s!” Kenny hopped off in the direction of the candy machine.

This month’s winner in the Conceptualization category was a no-brainer: Bradenton, Florida’s very own Have Gun, Will Travel. Their handsome sophomore effort, Postcards From The Friendly City (Suburban Home) is almost as notable for its ingenious design and packaging as its organic, infectious brand of Americana pop. We here at UTR are big fans of bands that claim their hometowns with pride and, like the finest local produce, HGWT’s music has a refreshing immediacy to it that can only come from an innate connection with one’s native environment. Like a Sunshine State-sanctioned answer to New York’s Fountains of Wayne, the band expertly canonizes the displacement of suburban existence on such gems as “Land Of The Living” (We belong to the land of the living/ but we don’t live there anymore) and conjures up a disturbingly cheery dystopia in “Maritime Rag” and the aching “Salad Days.” And, really, in these days of managed expectations and digital-only releases, not enough can be said about the great lyric insert in the album package, cleverly reproduced to look like a folded miniature copy of the Bradenton Chronicle from 1955. Excellent work, fellows.

Finally, let’s not forget the fine forthcoming effort from Snow & Voices, Anything That Moves (Electric Ruby). This is the sort of record for which the “warm, ethereal and ambient” modifier would be tempting to use, but there is something inherently edgier here that reminds us of the more interesting and unpredictable aunts of the Lilith’s: Maria McKee, Johnette Napolitano, ‘Til Tuesday, The Hotels. There is no yogic serenity in vocalist Lori Kranz’s fragile state of mind. She sounds like she’s singing beautifully because beauty is the last thing she’s got. And we believe her.