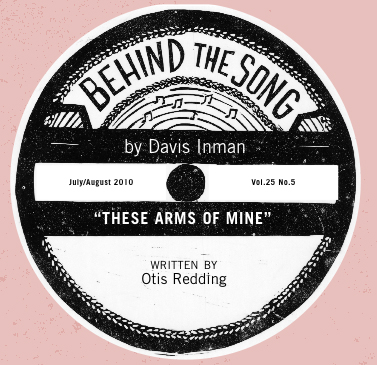 Before Otis Redding cut “These Arms of Mine” at the Stax studio in Memphis in October 1962, he was just along for the ride; afterwards, he emerged as one of the most distinct voices of southern soul. It took a guy like Otis, with a heart as big as the state of Georgia, to get there in just one take.

The definitive version of the story of Otis’s fateful first Stax session comes from Peter Guralnick’s tome, Sweet Soul Music (which also happens to be the definitive anything on the subject). Through the years, the story of “These Arms of Mine” has entered into modern folklore, with wildly divergent riffs emerging through the collective memory. As Guralnick writes: “If everyone who claims to have been present in the Stax studio on that momentous day had actually been there, the studio would have been packed to overflowing.” My own version of the story is a half-baked and personal journey, but I’ll tell it anyway. The central theme is that Otis wasn’t really supposed to be in Memphis that day—at least not to record. (Isn’t being in the wrong place at the right time always the best way to set up an apocryphal story?) The session was actually booked for Johnny Jenkins and the Pinetoppers. (Here, Jenkins creates an interesting sideline to the story. A mysterious cat that two years later cuts a single for Stax, the funky and spunky instrumental titled, er, “Spunky.” In a later twist of the Jenkins tale, he commandeers a Duane Allman solo album—Duane had all but abandoned the masters to go and start a little group called The Allman Brothers—and eventually pushes it to see the light of release as Ton-Ton Macoute in 1970! A few tracks from the era have survived with Duane intact; check out Duane’s vocal on “Goin Down Slow” from An Anthology.)

But back to the story at hand. Otis sang for Jenkins in the Pinetoppers but mostly was his driver. For whatever reason, Jenkins’s session at Stax that day was a bust and, with just a little time remaining on the clock, everybody called it quits. Despite the varying first-person accounts of how Otis’s session initializes, I like to think that it’s Otis himself who begs for the chance to make a record, and, unprompted, chests out an a cappella version of “These Arms Of Mine” on the floor of the tracking room, with the initial dubious looks of the remaining Stax cadre slowing giving way to sheer astonishment. Guralnick suggests that there may have, after all, been plenty of music industry machinations at play. There’s Joe Galkin, a radio promoter in cahoots with Atlantic Records, and also future manager Phil Walden, who’s rooting for Otis from long distance (he wasn’t actually at the session that day). Also, in my recollection of hearing the story, it is Otis who instructs Steve Cropper to play “church chords”—essentially the 6/8 triplets that are the pulse of much gospel music—clearly Otis’s bread and butter. Guralnick writes that it is Jim Stewart who says that Cropper, by no means an accomplished pianist, could only muster up such a basic rhythm. Either way, it’s all the song needs on that front. Jenkins’s guitar playing sounds as if it could be Steve Cropper and it’s interesting to think that maybe “These Arms of Mine” served as a blueprint for Cropper’s future work with Otis. To me, it clearly foreshadows Jenkins’s “Spunky,” which is one of the great, overlooked nuggets of the era, with spiky, staccato lead work and a passionate, sweeping overall feel.

Like with many success stories in the music biz—for better or worse—it’s not just the music itself but also the handshakes behind the song that ultimately solidify it in the history books. Galkin gave Jim Stewart fifty percent of the publishing on “These Arms of Mine,” and Stax agreed to release the single on their new subsidiary label, Volt. In a classic example of the rampant payola scheming of the day, Stewart then gave his share over to Nashville DJ John R. at WLAC. And only after the song received what Guralnick calls “assiduous play” at WLAC did “These Arms of Mine” break the charts, and meagerly at that.

But looking at “These Arms of Mine” today, it’s not hard to see how it was the song that launched a thousand ships. Lyrically, it’s pure Otis. Gushing with emotion, the “arms” of the verses—“These arms of mine/They are lonely and feeling blue”—have an eerie consciousness. Meanwhile, the chorus sets up the singer’s earnest proposal—“And if you would let them hold you/Oh, how grateful I will be.” This kind of writing would define the Big O’s career. His worldview was endearing and genuine and when he died in a plane crash on December 10, 1967, at the mere age of 26, he was just at the height of his powers.