Langhorne Slim steps offstage on a chilly night in mid-September looking tweedy and amicable. Almost immediately, he makes his way off to the side where a cluster of fans idle to talk to the artist and buy his record. Ever the folky gentleman, he chats them up like old friends, including myself, to whom he kindly recalls his 2010 American Songwriter Session.

Only moments ago, he was alone with a chair and guitar on a stage wedged between two brick buildings. It was one in the morning on a Sunday, but he worked up the late crowd with acoustic numbers from Be Set Free and proffered an electric bluesy rendition of the otherwise cringe-worthy “I Want Candy.”

The toe of one leathered lace-up boot sent the chair sprawling across the stage, and its owner quizzed his audience: did we know which side of Bristol we were on?

It’s a legitimate question. Tennessee and Virginia’s twin cities meet at the states’ border, which is where Bristol Rhythm & Roots Reunion just clocked in its eleventh year this September.

Famed for the Bristol Sessions of 1927 and 1928, also known as the Big Bang of country music, Bristol, Tennessee was designated by congress as the birthplace of country music in 1998. And its residents don’t want anyone to forget it.

In October 2001, city leaders scrapped together a music festival to keep the memory of the Bristol Sessions alive and celebrate the folk gumbo both brewed and brewing in the region and beyond it. Now held every third weekend in September, Rhythm & Roots Reunion reigns in thousands with upwards of 180 bands in historic downtown Bristol.

“We want to celebrate and preserve the history of Appalachian music as much as we can. We’re very careful to make sure we adhere to that, because part of our festival is an education side of things that we don’t really promote,” says Charlene Baker, Rhythm & Roots Director of Marketing/Public Relations and festival associate since 2002.

Baker is talking about the young folk. “We can get younger people in the doors here if we have a David Mayfield or Robert Randolph, but the great thing is they can pass by those stages with traditionals like Doyle Lawson and Del McCoury and can gain a real appreciation for the traditional side of things.”

Bristol is a place of convergence — between new and traditional, Tennessee and Virginia  — divided by State Street. As much a part of the atmosphere as the music, the borderline street cuts through the downtown area and is a sort of symbolic hub of Rhythm & Roots.

So what side of Bristol were we on, anyway?

Virginia, the crowd chorused back to Langhorne.

“Exactly.” A smirk cracked from beneath the brim of his hat. “I just wanted to make sure you knew what the f – was going on.”

Downtown Bristol is a stage set to be a tourist destination, though there’s little tourism. The old buildings that were once in decay – including the 80-year-old Paramount Center for the Arts – have been restored. They’re nestled against a mountainous backdrop that’s gorgeous when the trees are tinged with early autumn, and a train track cuts through the city.

It’s the sort of atmosphere that would make the Avett-Brothers-and-Mumford-loving neo-folkies drool, but in Bristol, it’s not a shtick. The music at Rhythm & Roots belongs to the people, and they don’t play it because it’s trendy. They play it because it’s there – in the history of the place.

Robert Randolph & The Family Band, Langhorne Slim and Justin Townes Earle – who played a quiet set Friday night – were among those who headlined the weekend, though there appeared to be a lack of rank among the bands; smaller acts pulled in just as big of an audience as the top bills.

Most of the Rhythm & Roots lineup remains painfully regional – like The everybodyfields, who have almost a cult following in their native Johnson City – and their talent far outstrips their level of recognition – not unlike many of the artists recorded by Ralph Peer 80 years ago.

When the producer arrived in ’27, rented the upstairs room of an old hat company and put an ad in the paper, he not only attracted the Carter Family and Jimmie Rodgers, but an untapped mine of hard up, musically adroit horse-and-buggy types without the music business savvy to pursue it as a profession. In the years that followed, country music pushed westward.

Ask any local – like Susan Couch, a woman working a boot tent at the festival. Couch comes from a musical family in southwest Virginia and insists that the music is “strung out all around” the Appalachian area.

“We had so much heritage in this area, I think more so than Nashville, in the early 1900s. There wouldn’t have been a Nashville if we’d had a Grand Ole Opry and things like that.”

Rhythm & Roots Reunion sparked from Bristol’s unwillingness to watch their history gray, and the downtown area expanded with the festival. Formerly neglected property has become a renovated musical haven that’s sheltered, friendly enough to unnerve an out-of-towner, and conducive to a decent pub crawl.

With a spoil of aging and fresh faces putting an individualized stamp on traditional Appalachian folk and country, plus weekend passes for under $50, Rhythm & Roots has snowballed over the decade.

“It seems to work,” Baker laughs, and says that the festival committee cares less about the number of attendees as getting people to return the next year.

In 11 years, the attendance rate has reached about 45,000, which isn’t a shabby figure considering that, according to surveys conducted by the festival committee, most Rhythm & Roots-goers heard about the festival through word-of-mouth. 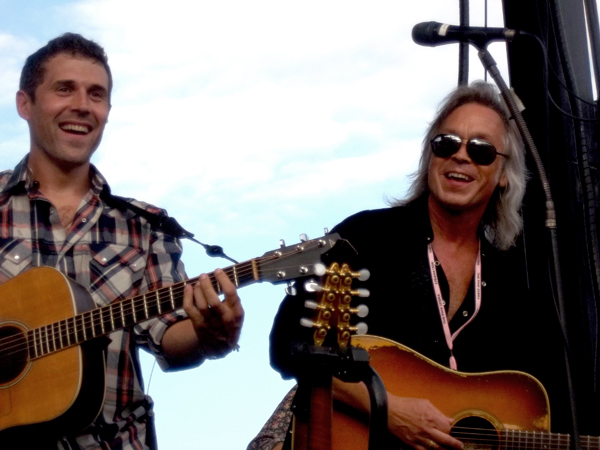 The eleventh year saw the streets and sidewalks teeming with old bearded fogeys, toddler-toting parents, beer guzzlers under designated drinking tents and young rowdies. A stork-legged and argyle knee-socked Sam Quinn, solo artist and vocalist in The everybodyfields, was in the crowd watching a Bombadil show. People sprawled out on curbs to watch the stage. It smelled like sharp mountain air and too much popcorn, and everyone appeared unshakably happy. Maybe it was the beer. And maybe it wasn’t.

“Maybe other festivals, you don’t get that intimacy that you do here, because you’re in this big area with tents. It feels exposed, and here, you feel more intimate and protected, and I think it kind of lends itself for you to be a little more…” Baker pauses. “You can get up and dance with a stranger and not feel strange about it,” she laughs.

The evidence of that was messily etched all over the Dance Tent Saturday night as Detroit-based Frontier Ruckus made its Rhythm & Roots debut before a very non-self-aware audience. Frontier Ruckus’ urban bluegrass, driven in large part by David Jones’ command of the banjo –- which he’s played since he was 12 -– coupled southerly instrumental expressiveness and lyrical accessibility.

Though they consider themselves very much a northern band, southeastern influence and being in Bristol is a shoe that fits them. “It’s a very welcoming pocket of American culture,” says Jones of the region’s music and those who play it.

Though it was the band’s first time at the festival, the experience was very much a homecoming. “The thing that’s interesting about Bristol is that many festivals are very eclectic almost to their own peril by having so many types of bands. But, literally, we had connections to almost all the bands I can think of. We’ve either played shows with them before, or have Ramseur Records connections with bands like The everybodyfields, Bombadil, David Wax Museum, Jessica Lea Mayfield, David Mayfield,” says Frontier Ruckus vocalist/guitarist Matthew Milia. “It’s very kindred, kind of like a family reunion of sorts.”

Jessica Lea Mayfield delivered two beautiful sets – one Friday night, one Saturday afternoon – of frill-free renditions from the gorgeous, heartbroken Tell Me without the synthiness of the recording. This seemed to heighten an emotional aspect of the songs, and, peering timidly from behind narrowed butterfly lashes, her velvet vocals melted over the crowd basked out on the asphalt during the latter set.

One of the biggest turnouts was for the revered Johnson City alt-country torchbearers The everybodyfields, one of the contemporary regional rulers of the festival. Quinn alongside fellow vocalist Jill Andrews, they brightened a late afternoon with sunny but subdued alt-country, and announced the end of their four-year breakup.

One of Rhythm & Roots’ offbeat gems is Bombadil, another Ramseur Records band and three-time festival players. Four rock nerds in something like matador suits pulled in sizable crowds for both of their sets. They were filled with horn and piano, songs of jellybean wine and awkward questions. They recently finished recording their new record, All That the Rain Promises, in the same Portland, Oregon barn that The Decemberists once recorded in. Some of the new record made it into their sets, which were delivered with a funny hybrid of Avett Brothers folk sentiment and The Shins’ indie pop quirk.

Bombadil come from the more musically progressive Durham, NC, and recognize Bristol’s niche. “The people that live here dictate the music that comes out of it. It has a great tradition and I think the town wants to contain it,” says vocalist Daniel Michalak.

Of the countless variations of Appalachian homebrew – singer/songwriters like Mayfield, versatile country/blues song-and-dance men like Earle, everyman pickers like bluegrass jam band Railroad Earth – the artists are all underneath the city’s tradition, pushing it afloat.

“I think pop music and top 40 and all that have a place and time, and it’s sort of a little time capsule. But I think musicians reach a point where they can’t relate to it anymore, and they reach back to the past to find new material and new inspiration,” Baker says. “Sometimes you just want to look at the past to see what your future’s going to be.”

The last Piedmont Stage performance Sunday evening was Scythian, a DC-based act that certainly looks to its past to find its future. With a sound built on Euro trash beats, European blue-collar dive songs, boozy bro anthems and interactive gypsy dance music, its essentially folk core drew credited singer/songwriter and country aficionado Jim Lauderdale to the stage to sing a tune with them.

Scythian plays up the ridiculousness in their music, but deliver it with an uncanny grasp of their instruments, which became apparent as a shrill, evocative weeping oozed out of Alex Fedoryka’s violin as he took a solo violin-only song to himself.

The band stretched their time to the limit before stepping down and inviting everyone to get a record and say hello; the sound guy was growing pissier, and the sun was slipping down on the festival.

Bristol is somewhat closeted, and certainly not star-spangled, but its aged cultural aesthetic is something of a muse – one that’s wrinkled, but not dead. However artists interpret the music that belongs with that aesthetic, it all shares a sense of Americana nostalgia and comfort. Rhythm & Roots is, in essence, nostalgia itself. And as for comfort, it’s dancing drunkenly in front of you and yelling an encouraging “whoo” to the band. It’s a festival of lighting each other’s cigarettes and letting someone with a camera sidle up and block your view to get a good shot.

Rhythm & Roots Reunion is partnered with the Birthplace of Country Music Alliance and both are still working to validate the city, now with a cultural heritage center. With an expected completion date in 2013, the center will serve as a city touchstone that features exhibits and live music. But in the meantime, Rhythm & Roots 2012 passes are already on sale.

It doesn’t look like they’re giving up the musical ghost. 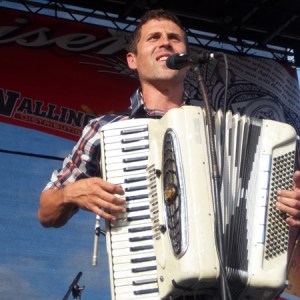 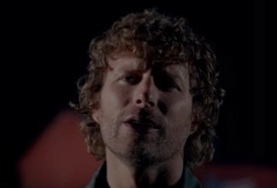