For guitarist Derek Trucks, learning the six-string came largely on the job, at gigs, and on stage. Such is the story for many musicians. But in Trucks’ case, his life’s work began when he was nine years old. It led quickly to sharing bills with all-timers like Buddy Guy and Bob Dylan.

Trucks, who was born in Jacksonville, Florida, says he can’t remember a time without music. Records constantly played. His parents took him to festivals to see artists like Dizzy Gillespie and Ray Charles. It helped that his uncle, Butch Trucks, was a founding member and drummer of The Allman Brothers Band, a group his nephew later joined formally.

Trucks says his father, who was an atheist, treated music as if it was a religion. The way he would speak about certain shows, and how specific songs would give him the chills. Today, looking back on it, Trucks notes that he had a “really unique upbringing and career arc.” But that’s the kind of origin story that leads to Grammy Awards, and lands players on greatest guitarists lists. That unusual arc also includes the release of four new LPs in 2022 by the group Trucks started with his acclaimed musician wife, Susan Tedeschi, the final of which, I Am The Moon: IV. Farewell, drops Friday (August 26).

“Early on,” says Trucks, “it was weekends, missing a few days of school. And by the time I was 13, 14, or 15, it was pretty full-on. I was going to public school but my teachers were giving me my homework ahead of time.”

Those formative years, he says, were a “blast.” He was on the road and by his early teenage years, he was playing with Guy and Dylan. He was constantly surrounded by musicians “far superior” so he was always “punching up,” he says, with a chuckle. “Trying to get better.” He encountered people who would be lifelong mentors. By 18, Trucks was playing some 300 shows a year, experimenting with sound every night. He got to “that 10,000 hours thing earlier than most.” He got to meet excellent players, people who knew legendary blues guitarist Robert Johnson. But he wasn’t some snot-nose slouch, allowed to be on stage because he was a cute kid. He was valuable early, one of the guys even if he was much younger.

“[Buddy] was such a nurturer,” Trucks says. “He would make you feel that but at the same time, he was teaching you lessons while you were doing it. He would bring the band down to a whisper, you’d be playing, it could not get quiet enough for him. And you’d ride that wave.”

Trucks was a “sponge,” having these musical conversations with adults who’d already accomplished so much. He boasts such experience that he’s mature enough to note that the greatness of songs isn’t about one genre or style. A guitar player who often showcases his talents on slide, Trucks says that all great music is “dipping from the same well.” It’s about storytelling and brutal honesty. While he knows that earworm songs and lighter pop fare have their place, it’s music thick with meaning that grabs his ear. Music like the kind his wife makes. The two were traveling in similar playing circles—indeed, Tedeschi is just about as accomplished as they come, opening for giants on the road—but they met in earnest in New Orleans. She was opening for the Allman Brothers and he was playing in the band.

“I used to joke with my band,” Trucks says, “I’d just gotten out of a relationship, and [I was saying that] until I meet a woman who is listening to Mahalia Jackson and Howlin’ Wolf, I’m single. I remember meeting Sue, hanging with her, talking music… and I called the guys in my solo band and said, ‘I’m in trouble.’”

Tedeschi and Trucks are both supremely passionate about music and their craft. Not to mention, Trucks says, there was a physical connection, too. They’ve now been together for a while, and have kids who’ve grown and left the nest. Today, he says, the relationship is better than ever. He says he appreciates her more than he ever has. It took them a while to link up formally in a band they co-lead but it’s worked out. Trucks says his playing has improved just being around Tedeschi, his lines have gotten more lyrical, like a human voice.

“I think a little bit is that steel sharpens steel,” Trucks says. “Standing on stage, next to Susan when she’s singing and playing, she gets the job done. She’s fucking it up out there!”

The two also recently shared the stage with legendary Phish guitar player, Trey Anastasio, in a performance that would later be mixed, mastered, and released under the title Layla Revisited. The occasion arose when a festival asked if Trucks wanted to sit in with Anastasio’s band and if Anastasio could sit in with him and Susan’s. After the agreement, the idea came to revisit Eric Clapton’s Derek and the Domino’s in full (the band, in fact, that Trucks was named after). They performed the entirety of Layla and Other Assorted Love Songs. That then led to the four LPs the Tedeschi Trucks Band put out this year. Born from free time during the COVID-19 pandemic and ensuing lockdown, the albums involve a revisiting of the original poem that inspired Clapton. But the members of the Tedeschi Trucks Band flipped it, turning the perspective from a man’s unrequited love to that of Layla, herself. They began writing and, later, when things felt safe, began recording.

“It was very freeing,” Trucks says. “It felt like the early days of playing, doing it to do it.”

Now, as Trucks and Tedeschi look ahead, there are months of gigs on the horizon, both in the United States and Europe. They’ve been working on new music, with more releases likely forthcoming soon, too. For Trucks and Tedeschi, the task is to take everything day by day. In fact, that’s always been the case, ever since their earliest days as musicians. Yet, with each venture and adventure, the return is always like coming home.

“If you’re going through something,” Trucks says, “you can put on music and it brings you back. There’s just something that feels inescapable about it for us. It’s always home.” 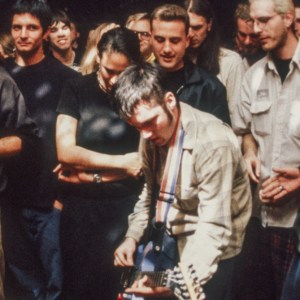