“I want to thank the Hall of Fame and all the people out there through all of these years,” said Parton during her speech. “I’ve been doing it all my life and I do love it. I’m very humbled by this.”

Before her induction, P!nk, dressed in head-to-toe sparkles like Parton, introduced the country legend into the Rock Hall with a moving speech calling the evening “one of the most magical nights” she has witnessed while being in music.

Taking the audience through Parton’s career, her hard rural Tennessee upbringing, her role as a women in music in America, and her philanthropy, P!nk also highlighted some of the singer/songwriter’s “heartbreaking and soul-stirring songs” from “Coat of Many Colors” and “Jolene” to “9 to 5.”

“[Dolly is] one of the greatest storytellers of our time … of all time,” said P!nk in her speech. “There are few finer songwriters, male or female, that ever lived. She writes about things that others would prefer to be swept under the rug.”

An introductory video on Parton featured her goddaughter Miley Cyrus, along with Carrie Underwood, Kacey Musgraves, and others.

The 2022 Rock & Roll Hall of Fame ceremony marks the first time in its 37-year history that six female acts—Parton, Benatar, Simon, and Annie Lennox (with the Eurythmics), along with posthumous honors for folk pioneer Elizabeth Cotten and “the mother of hip-hop” Sylvia Robinson— were inducted into one class.

“I’m a rockstar now,” said Parton during her speech, teasing her new upcoming rock album, in which she said she would like to feature a new rendition of “Stairway to Heaven” with Led Zeppelin’s Jimmy Page and Robert Plant. “I still got rock and roll down in my country soul.”

Earlier in Parton’s segment, Brandi Carlile joined P!nk for an opening rendition of “Coat of Many Colors,” while Sheryl Crow covered “9 to 5” with Zac Brown before closing with an all-star rendition of Parton’s 1974 hit “Jolene,” featuring Rob Halford of Judas Priest, Pat Benatar and Neil Giraldo, Eurythmics, and Duran Duran’s Simon Le Bon.

Strutting out in a head-to-toe black leather outfit and an electric guitar strapped around her neck, Parton gave the audience a very rock and roll Pete Townsend-like strum before performing her new original song “Rockin.”

“And you thought I couldn’t rock,” joked Parton before performing the song, which references early pioneers of rock. “It’s a fine little song, and it’s real rock-y, so I’ll have something fun to play off of, to ease some of the tension.” 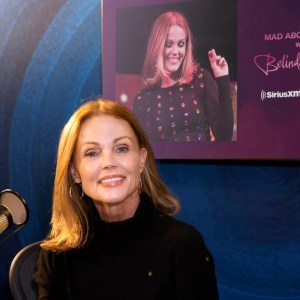