Halfway through her set in New York’s East Village venue, Eleri Ward is overcome with emotions. It’s her return to the stage after the close down around the pandemic and her first as a solo artist.

“It was truly a special night for me,” the New York-based actress, singer, and songwriter tells American Songwriter. “I had never done a solo show before every show I’ve ever played prior was always with someone else, so it was definitely a milestone for me to play 10 songs on acoustic guitar, alone.”

Prior to her new album A Perfect Little Death (Ghostlight Records), Ward mostly worked in some collaborative union. The album was an open door to explore her more folk-driven, songwriter half, one she didn’t know was initially there while visiting the musical stories of Stephen Sondheim through the soundscape of Sufjan Stevens.

Hand-picking her collection of 13 songs, Ward offers her own dustier folk renditions from Sondheim’s Sweeney Todd: The Demon Barber of Fleet Street—the musical Sondheim first brought to the West End in 1980—with “Pretty Women,” “The Ballad of Sweeney Todd,” and “Johanna (Reprise)” to tracks from Sunday in the Park with George, including “Finishing the Hat” and “Sunday” and others from Sondheim musicals like Evening Primrose, Follies, Into the Woods, Company, and A Little Night Music. On the Follies track “In Buddy’s Eyes,” Ward was most inspired by Barbara Cook‘s rendition of the song.

Produced in the closet of her apartment during lockdown after her stripped-down version of “Johanna (Reprise)” blew up on TikTok, Ward decided to expand on her covers and finished the album within a month.

For Ward, the album was the most random and organic union and a love a Sondheim that stretches further back—to high school. Studying at the Chicago Academy of the Arts, Ward says her teachers were always introducing the famed lyricist and composer, and while she loved his work, in writing her own music, she never thought to combine the two worlds.

“I don’t know what it was that made me feel like they were two very separate entities within me,” says Ward. “Then, I went to Berklee College of Music for songwriting for a year before transferring over to Boston Conservatory for musical theater, and it was the first time that I found a good balance between my songwriting and musical theater… still, nothing really connected the two.”

Moving to New York and working through constant auditions, Ward found Sondheim’s “Every Day a Little Death,” a song from Sondheim’s 1975 musical A Little Night Music, kept resurfacing in her mind.

“The song was just in my daily vernacular, almost like a joke,” says Ward. “Naturally, it was stuck in my head, and when songs get stuck in my head I either listen to them obsessively or I cover them.”

Admitting that she doesn’t really enjoy listening to musical theater, Ward picked up the guitar, which she had only started learning to play a few years earlier in 2016, and began getting that song out of her system, releasing her acoustic version on Instagram, loosely captioned “Sufjan on Sondheim.”

“It was a joke because I felt like Sufjan Stevens would probably write this,” says Ward. “And he’s one of my biggest influences.”

After she posted the track, the feedback was strong and one friend suggested Ward continue covering Sondheim as a series. The next day, Ward took on “Johanna (Reprise),” first posting it in March of 2019.

“I was just inspired by this whole idea of taking fun time songs and making them into this moody folk thing,” says Ward, who continued to sporadically capture various songs within the Sondheim catalog. “Sometimes it took a couple of days in between arrangements and other times it took months and months. It was never anything that was a priority. It was very much for my own enjoyment, a creative exercise of sorts.”

It was also Ward’s first time arranging music. “This is my first time just naturally falling into arranging something outside of its original style,” she says. “It’s not something I ever thought about doing, but there’s something very magical about it. I love that [the album] just fell out the way it did. It was a snowball effect of a very small snowflake turning into a whole entity that I never would have imagined.”

Fixated on the light and mostly darker sides of the story, Ward is attracted to conflict, artistically, which is why she’s always felt the connection to Sondheim. “I’m not someone who just loves all musical theater,” admits Ward. “There’s something about the conflict and the humanity and the darkness within his work that really speaks to me because it’s raw, and it’s real if art imitates life, then why would it be any other way?”

Ward adds “Every song has an undertone of a shadow or darkness, some more than others, but that is so attractive to me. Even something like ‘Take Me to the World’ [‘Evening Primrose’], on paper, you would think it’s a very hopeful song, but in the context of the show it’s sad.”

Taking Sondheim’s works out of the context of the shows, Ward still wanted to maintain that undertone of doom, something ghostly, and a bit eerie with the background vocals and harmonies. “I don’t want to listen to a song and all is bright unless I’m listening to some jazz standards while I’m drinking a glass of red wine,” laughs Ward. “To really feed my soul, I want to listen to something that has drama, that has conflict and darkness to it. That’s more intriguing to me.”

For Ward, writing is like magic. Some writers spend months or years working on a single song, but that’s never been her process. “It either all comes out at once, or it is not vibe-ing,” she says. “I’ve always been someone who works in the heat of the moment, rapid-fire thoughts. I sing my thoughts, and they either come out as a lyric attached to a melody or a melody where I know what I want to say, but I just need to figure out the puzzle pieces.”

Always learning from what she hears, sometimes growing an obsessive attachment to a sound or a lyric is where songs begin to root for Ward. “I often learn from what I become obsessed with,” she says. “If a melody jumps around a lot I think about how I can mirror those interval changes in my own music. Once it’s within the headspace of where I am, it all comes out when I’m in that magical space, just flowing.”

Playing mostly acoustic on A Perfect Little Death was also a big departure and a first for the artist. “I’m allowing myself to learn new things and go with whatever comes up because I love planning everything out,” she says. “I love control, and the music that I’ve made has counteracted that in a way where I just let that be my influencer rather than me trying to have everything just so. This album came out of me when I didn’t even know it was a part of my artistic identity.”

Moving ahead A Perfect Little Death is Ward’s gateway to more exploration as she readies a new single of her original music and curates her second Sondheim album.

“I felt like I was in a playground and allowing myself to go wherever I ended up,” says Ward of A Perfect Little Death. “There’s something very riveting about finding a new part of my creative voice solely from the music that I’m making, then letting that influence the music that I make from here on out in whatever way it comes. I can take nuggets of it into the future and from there who knows what will come from that. It’s fun to discover these new parts of myself. My brain is filled with sounds.” 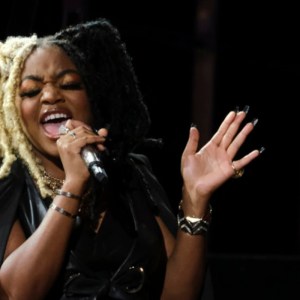