When Gracie Ray, the granddaughter of the legendary songwriter and performer David Crosby, first expressed interest in becoming a professional singer-songwriter, her famous grandad experienced a gamut of emotions.

“It’s an odd mix,” he told her in the two-part Q&A series that Crosby and Ray have shared exclusively with American Songwriter (see below). “There was definite parental fear of ‘Oh my God, this is a turbulent and terrible place, this world! My darling granddaughter, I’m so worried!’ And the other half of it was absolute excitement and joy!”

Ray, who has released her EP NightHawk, which includes her single “Home To Me,” grew up on the sides of stages, watching her grandfather and his cohort of talented, ambitious friends. And, she says, in doing so, she couldn’t imagine anything else better on Earth to do with her time. (Stream/download Gracie Ray’s new EP NightHawk HERE.)

She began learning from Crosby and the company he kept. Now, she says, she’s ready to embark on a career, that she can only hope is as important, impactful, and gratifying as his.

“I think I get that audience banter,” she says to Crosby, “from watching you crack sometimes the same jokes nights in a row.”

“Oh, piss off!” Crosby replies, before the two bust up in laughter.

But Crosby’s career isn’t finished, either. The two-time Rock and Roll Hall of Fame artist and co-founder of The Byrds and Crosby, Stills & Nash, is himself undertaking yet another new chapter. He’s set to soon release the new live album and full concert DVD set, Live at the Capitol Theatre, via BMG. And fans can check out the lead offering from the work, “1974 (Live at the Capitol Theatre)” below. (Pre-order the new live set HERE.)

“Hosting David Crosby at The Capitol Theatre was an honor for us and when David came out and crushed his performance it elevated things even further. We feel very fortunate that this legendary moment was captured forever,” said The Capitol Theatre owner, Peter Shapiro.

Check out the lead single and tracklist from the new live offering below.

As for Ray and her burgeoning career, the young artist says she first picked up a microphone at eight years old and learned songwriting by watching her father, James Raymond, an accomplished musician himself, and grandfather work. She then learned piano and guitar before immersing herself in musical theater during high school.

“My music is conversational,” Ray says. “Lyrically, I find a lot of truth and beauty in not sugarcoating where I’m at mentally or emotionally. I try to transmute my pain into love.”

Fans can see her up close and personal as she speaks candidly with Crosby about what’s to come, what to look out for, and what’s on her creative mind.

Check out Part 1 of David Crosby’s interview with his granddaughter, Gracie Ray above and Part 2 below.

Things We Do For Love

What Are Their Names

By The Light of Common Day

Look in Their Eyes 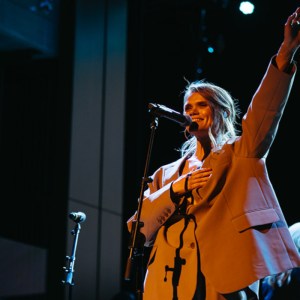