It was 2013, their 40th anniversary show. Los Lobos, our home-town heroes at the Whisky on Sunset. Kind of like if The Beatles had gone back to do a show at The Cavern. After getting so big, it would seem a club like The Whisky would be too small to contain them. And it was. It was an absolutely exhilarating show. I could barely contain myself, as the following review confirms. With The Blasters opening – featuring the great Dave and Phil Alvin – and then Los Lobos – it was one of the most exultant shows I’ve ever seen. Here’s a reprise of my reflections on that night.

Something like Beatlemania swept through the historic Whisky on the Sunset Strip in Hollywood last night. Call it Lobosmania, an intense urge to scream because the power and excitement of what this one band does live makes it hard to contain one’s self. And the overriding emotion is one bordering on pure disbelief – that one unit of musicians could create a sound so full, and so great.

Well, Lobos has been making that sound for some 40 years now, and last night they showed why they remain vital – and beloved. Their greatness is pure:  undiluted by any attempt ever to copy a trend or jump on someone else’s style. In fact, they went far in the other direction. Not only did they not leap on the bandwagon launched by their hit recording of Richie Valens’s “La Bamba,” they went out of their way to create something so novel and different – the abstract, angular Waitsian world of Kiko and The Lavender Moon.

So how do they deal with this legacy they have long ducked, given that this was a night about legacy, after all? Well, they didn’t perform their best-known original, the great “How Will The Wolf Survive,” written by David Hidalgo and Louis Perez, at all, maybe because the answer is now obvious. This wolf has survived by always moving forward into new territory, while always honoring the past. They did that on this night by ending their round of spirited encores with “La Bamba,” but rather than imitate the bouncy and infectious breeziness they breathed into their hit record, they slowed down its tempo and turned up its intensity – think Led Zeppelin doing a slowed down “La Bamba” and you get the idea. Like everything they have ever done, it was unexpected, and way greater than you might have ever guessed.

They started their show the same way they started the band – playing spirited electric versions of Mexican traditionals – in this instance “Anselma Anselma” which comes alive when sung in passionate two-part harmony by Cesar Rosas and David – and ended with “La Bamba,” and in between covered all aspects of their remarkable career, which sparkles with truly amazing musicianship. Perhaps the most impressive thing about seeing them live in this small venue – as opposed to the Greek Theatre, where they often perform when in town – is just how real and pure this band is. With no gimmicks, no loops or off-stage keyboardists – their sound is big and solid. That David Hidalgo is a great musician is surely no big revelation; after all, he’s been bringing that musicianship to Dylan’s last two album, not to mention Paul Simon’s landmark Graceland. But to experience it live is a whole other experience – fueling, as it does, the engine that is Lobos. Louie Perez, the brilliant wordsmith who plays drums on many songs, also comes out front and played some stunningly surprising guitar leads, while Conrad Lozano keeps the bass end bursting through. There were no gimmicks, nothing calculated or hollow, everything as pure as the best music can be pure. This band is great on virtue of their musical greatness; beautiful songs paired with passionate singing, great harmonies always, and solid musicianship.

The full-capacity crowd loved it. Lobosmania was in great form all night as people way too old to act this way were screaming with delight. And unlike the usual crowd which packs the Whisky, these were neither hipsters or scenesters, but people like me – people who remember back to the baby days of Lobos, and have grown up along with the band.

As always Cesar, behind his big hollow-bodied left-handed guitar, was the mouthpiece, talking and joking with the crowd between songs as the others changed instruments and tuned. But even David, who is usually quiet in their big shows except when singing, was in rare form. “We made a deal with the tattoo parlor across the street,” he said. “You can get wolf tattoos tonight for only 20 bucks. Two for 40.” He then added that before going there, the band went to Tommy’s for chili cheeseburgers. No tofu for Lobos. Lobos touched on every aspect of their storied career, from the early party traditionals to rock and roll, eclectic musings, and pure blues igniting into rock & roll. David and Cesar effortlessly tossed leads back and forth between them, both astounding and inventive guitarists. And Steve Berlin on sax and keys was adding his bojo jazz riffs and big band exhortations throughout the evening, the ideal counterpoint of deep resonance to the big Lobos sound.

Cesar got the crowd going by saying “Anyone here from East L.A.?” Cheers of “Garfield!” for their high school, Garfield High, were prominent throughout the night. To commemorate this singular anniversary, Lobos invited another legendary band to open, The Blasters, with the brothers Alvin, Dave and Phil. They opened the show with essential rock and roll passion, and never stopped, reminding us, in every measure they play, just what rock and roll is all about. Great compact songs sung by an impassioned singer (Phil Alvin, who did admit after one dramatic opening, “You know this was a lot easier 30 years ago,”) and with an astounding guitarist. In this case, that role is played with great rock and roll purity by his brother Dave Alvin, who came out after several songs played without him, casting a figure in cowboy hat as stark and iconic as Johnny Cash, and playing, with a Zen cool, astounding electric lines on the guitar. Imagine the grace, facility and sweet melodics of Chet Atkins wed with the prodigious blues fury of Buddy Guy , plus the occasional touch of Eddie Van Halen’s superhuman pyrotechnics, and you get some approximation of how powerful this music can get. The Blasters and Los Lobos are two of the greatest bands to have emerged from this fair city, and each reminded us just why they matter. If anyone came into the show last night with a lack of love for either band, or any doubt as to whether they could still rock, they walked away believers. Almost three full days have passed since the show, but unlike almost all the music we hear these days, its magic has yet to wear off. I am still stunned.

Music this powerful and pure is rare, and last night I rejoiced in just how thoroughly these guys punctured the old myth that no great music grows in L.A. These are both indigenous bands, grown up right here, playing this very club, yet there was no apology for age or lost time. This was rock and roll greatness, and I, for one, am still stunned. It’s not usually this good. Long live Lobos and The Blasters. 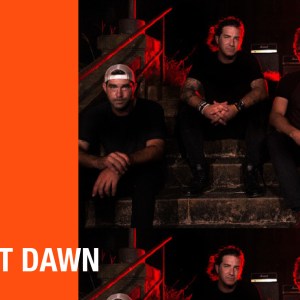