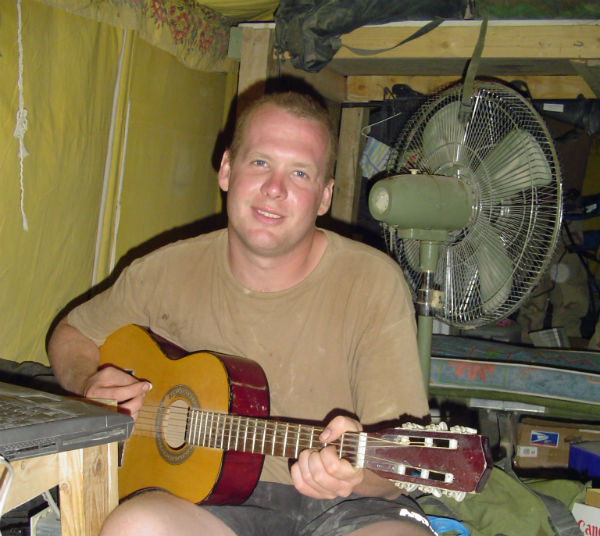 It’s well-over 100 degrees on a sunbaked day in Iraq 2004. Jason Moon, a backhoe operator in a combat engineer battalion, is strumming a guitar and making up crazy, nonsense lyrics on the fly. “Anything to get the guys to laugh,” Moon recalls. “A little while before they were getting shot at, they’re miserable, hadn’t had a cold shower in months. When you’re trying to stay alive, fifteen minutes of laughter are invaluable.” But those fifteen minutes wouldn’t be enough to ease the trauma that Moon would face when he got out. And music, the one thing he’d held onto during his darkest moments, would disappear completely for five years into a cacophony of Post-Traumatic Stress Syndrome (PTSD) symptoms, insomnia, dark memories and suicidal thoughts.

It wasn’t until after being misdiagnosed with major depression and insomnia, after telling a VA mental health worker what he’d seen in combat only to be told to “just forget about it,” after a failed suicide attempt, that music resurfaced and quite literally saved his life. Today, Jason Moon works with veterans of all wars to put the emotions of combat and the hidden terror of dealing with it alone into song. WarriorSongs is a non-profit that matches veterans with songwriters and together, a song becomes the saving grace that embodies what veterans so often cannot find the words to say. How war impacts the human soul. How combat affects the mind. How life after war is never a matter of “just getting on with it.” And how there is hope. For healing, for managing symptoms, for making something meaningful out of something that took all meaning away.

“It was an incredibly dark time,” recalls Moon. “The VA system wasn’t prepared for PTSD when my unit got home. No one even mentioned it to me. So all that time I thought I was weak, that there was something wrong with me, that I was the only one this was happening to. I mean, they tried me on nine different anti-depressants and several different sleeping pills – but when the cause of your symptoms is not depression or insomnia, those pills do weird things to you. I started drinking, I’d go out looking for a fight, I was hypervigilant, couldn’t work, couldn’t do anything. After four years of this, I took all the pills I had and some alcohol. I was done.”

But life wasn’t done with Moon yet. “I woke up three days later in the hospital. The VA finally decided I had PTSD – but only thanks to a music therapist who happened to have a pamphlet on it and gave it to me. It laid out every symptom I’d had for the last four years. It meant I wasn’t weak or alone. There was a name for this and a reason I was feeling the way I was,” Moon says. It took a suicide attempt to get the attention he should have had from the day he arrived home. “All of a sudden, I had the top professional at the VA attending to me, they got my medication figured out, I was able to get three to four hours of medicated sleep. I took every program they offered from biofeedback to meditation, to breathing exercises. But his big “aha” moment came at a Soldier’s Heart retreat – where they take groups of vets and lead them through a healing process based on the ancient traditions of warriors. “I had Vietnam vets coming up to me, one after another and telling me: ‘hey, I lost my marriage, my kids, I’ve lost it all, don’t wait 30 years to deal with your war.’ I realized if it could happen to these hard-core veterans, it could happen to me. I knew I had to fight to win this battle.”

He took the rest of 2009 off and focused on finding ways to manage his symptoms. “I figured out I had a new enemy, PTSD was trying to kill me and I took the approach that I would figure out how to attack this enemy. Combat engineers are famous for doing whatever it takes to get the job done – and that’s the mindset I took. By the end of 2009 I wasn’t doing any better symptom-wise, but I no longer wanted to kill myself and I knew why my symptoms were happening and that my reactions were normal. That made it more livable.”

What Moon didn’t know was that music would soon become not only his path to healing, but a new mission in life. “I had been writing songs since I was a teenager. I recorded my first 90 minutes of original material when I was 16 and played in bars and clubs throughout college. But after the war, I couldn’t write a thing. I was completely blocked, cut off from that part of myself, my spirit, my creativity. Songwriting had always been my way of expressing emotions, frustration, feelings. And I just couldn’t do it anymore.”

Until a French filmmaker asked Moon to participate in a war documentary and learned that Moon was a songwriter. He asked Moon to write some tracks for the film. “It all came back, and I think it’s because he asked me to do it, and it was like in the military – people don’t ask you to do things, they order you to do them and you do it. And so, I wrote songs, he paid me for four of them and the collection became a new album, Trying to Find My Way Home.”

Trying to Find My Way Home is “an accidental concept album” and covers the journey of a veteran coming home. It’s folk singer/songwriter, punctuated by fiddle, blues, and harmonica. The album was posted on SoldiersHeart.net where other vets and their families could access it. “I started getting emails. One mother played it for her son who had been suffering terribly, he broke down and they finally went to the VA to get help. The music spoke to them.” Moon then did something radical. He got in his car and drove all over the country presenting a 90-minute program that combines music, humor and information on PTSD. “I spoke to anyone who would listen. I played bar shows and asked for donations and gave them to vet charities. I noticed that when I talked to veterans, though, they’d have an “aha” moment. My message, my story resonated.” By the end of 2011, Moon had dedicated his life to using music to educate vets and civilians about PTSD.

WarriorSongs was formed in March 2012. Moon’s music has been tagged as Americana/folk rock, but his non-profit encompasses all music genres. “We’re not storytelling as much as we’re painting emotions with lyrics; each lyric is a brush stroke on a canvas. We’re taking veterans and their stories and hooking them up with civilian songwriters to create a song. Moon points out that “It’s not all ‘downer’ stuff. We’re big into showing the strengths and resilience of our veterans. We have a female veteran who was raped in the Air Force and a songwriter who understands sexual trauma, and they’re working on a song about how women have the right to be seen as hard-core, kick-ass soldiers and still be feminine, sexy females, too. So we’re looking at how songs can inspire as well as heal.”

“Our goal is to take veteran’s stories – and by the way, we’re not doing patriotism or shooting people, but the injury, the wound, the struggle to come back, the victories – and put it into music. Then take a collection of those songs into the studio and get some big artists to play on the CD. When we put that CD out, it will do two things: people will identify with the trauma and the public will get educated about how trauma affects people.”

Moon is looking for artists and musicians who would be willing to lend their time. “We’d love to draw some big name artists to this – and we’re looking at all genres.” He’s already got one song professionally recorded and a lot of material ready, but he’s short on time, money “and sleep,” Moon adds, laughing.

“Of all the arts, it’s music that the average American digests on a daily basis. We can communicate our veterans’ experiences – people who are our neighbors, coworkers, relatives and family – through music in a way that has never been done during and after a war. If we can get those songs on the radio, people will become more aware. And that’s what veterans need: awareness.”
Moon is careful to point out that his first priority is protecting veteran’s interests – they must approve the song that is created and they receive 51% of all royalties. A pro bono attorney drafted contracts, but Moon’s looking for an entertainment lawyer to ensure the details are fair to both parties.

In addition to songwriting, WarriorSongs also holds creative art retreats for veterans that engage in various modalities of art, and has an initiative underway to get a free copy of Trying to Find My Way Home into the hands of every veteran and anyone who works with veterans. Moon also travels the country doing outreach. “So far, we’ve presented to more than 10,000 veterans. We don’t always have the tools we need, but we get the job done. And yeah, our website looks kind of weak, but that’s because we’re spending our money out there helping people, on CDs and plane tickets,” Moon adds.

“I believe that if you’re walking by and see someone drowning, and you can help, you’re obligated to help, even if your iPhone’s going to get wet,” Moon says in all sincerity. “I have to help. I have music and storytelling and this is what I can do. Now I know why I went through all that crap. It’s given meaning to my suffering.”

To learn more about how you can support WarriorSongs.org, contact Jason Moon at info@warriorsongs.org. 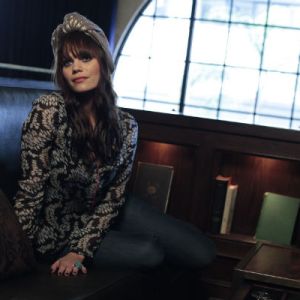 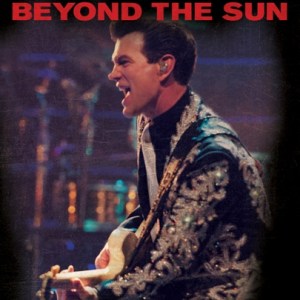