Pop singer/songwriter and actor Jesse McCartney is based in Los Angeles, but today he’s calling from Delray Beach, Florida, where he will perform one of his first shows in front of a live audience since the COVID-19 pandemic began. “Honestly, it feels like recovery—it feels like the world is healing,” he says. “It’s just so nice to see everyone’s faces in the audience, and people cheering and singing. It’s a sense of normalcy that so many of us have been hoping for so long.”

There will be many more shows—McCartney has a full U.S. tour set for May through June 2022 to support the October release of New Stage, his first studio album in seven years. He says this long delay wasn’t intentional, but rather because “[he] was having so much fun!” In between albums, he took on acting roles, including a significant turn in the television show Fear the Walking Dead, as well as voice-over work for films such as Alvin and the Chipmunks: The Road Chip (2015). But, he says, “Obviously the biggest thing worth mentioning is the fact that I was in a serious relationship, and now we’re engaged, so I was just enjoying that part of my life.”

All of this life experience eventually led McCartney back to music. “I realized there’s a lot of good material here, a lot of great stuff to talk about and share, and so that was when I decided to go in the studio and start writing again,” he says, “and out came this project, the New Stage album. So it’s been nice, and I’m really proud of it and think that it talks about some really important things. I’m just excited to hear everybody’s reaction.”

This album is titled New Stage because McCartney feels like he’s entered the next major phase in his life. “I’m going to be this married guy—it’s like all the sudden I blinked, and I’m a grown-up, doing grown-up things and making grown-up decisions—it just feels like I’m in chapter two of my life at 34 years old, and I’m really happy about it,” he says. “Overall, I think that the message on this album is, I’m just so grateful for all that I’ve been given.”

McCartney says he’s especially excited for people to hear the track “Party for Two,” which he wrote as an engagement gift for his fiancée, Katie Peterson. “It has a very classic tone and energy to it. It’s got kind of a bossa nova feel. I played it live now twice, and I can already see it connecting with the audience. It’s nice to see that,” he says.

Besides his engagement, other topics that inspired McCartney for this new album included looking back on his first taste of fame as a teenager, travel, and his life in the Laurel Canyon area of Los Angeles. He keeps his songwriting ideas organized in a straightforward way: “I have endless amounts of voice notes on my iPhone, and as basic as it sounds, I use the Notes application,” he says. “I make a punch list of all the things that I definitely want to talk about for the project, and I try to write a few songs around these topics. Then I’ll sing a melody on the mic and try to write lyrics to that melody. It’s not reinventing the wheel, but it works for me.”

For his lyrics, McCartney tries to focus on the moments in life that other pop performers may overlook. “I think there’s something very special and meaningful and vulnerable about having songs that could literally be about having dinner one night,” he says. “People connect with that, and I think they see a lot of themselves in music like that, especially now that the fans are getting older. Maybe they, too, are married or engaged and having kids. I feel like they’re sort of growing up with me and they get to share that.”

McCartney first discovered the joy in sharing music when, at two and half years old, he sang “Twinkle Twinkle Little Star” for his parents, “and my mom and dad were like, ‘He’s singing it in perfect pitch!’ I could just hear songs and then sing them back in the very same key that they were performed.”

From there, McCartney says, “I listened to a ton of musicians and singer/songwriters growing up, a lot of which were my parents’ favorites: James Taylor, Carole King, Stevie Wonder, Billy Joel, Michael Jackson, and Prince. Elvis Presley was the first album I ever pulled out of my parents’ album collection when I was like four years old, so I discovered [him] on my own. I thought, ‘This guy is really cool—I want to be like him.’”

McCartney also remembers drawing significant inspiration from contemporary singer/songwriters: “I remember trying to emulate Craig David, who I idolized. And Daniel Bedingfield, who I think is one of the greatest pop vocalists. Those two gentlemen, for me, really started shaping my early sound.”

McCartney’s parents were supportive of his budding creativity, and encouraged him to audition for a community theatre production of the musical Oliver! that was being put on in the town just north of New York City where they lived. “I was scared at first, but I saw the other kids getting up auditioning and in a confident way, [as a] precocious little seven-year-old, I thought, ‘I can do better than that.’” And he could: he got the lead role of Oliver.

Performing in that musical theatre production was life-changing for McCartney. “That was this moment where I realized, ‘This is everything to me. This is so much fun! I feel so comfortable here.’ So I just kept chasing that feeling,” he says.

Singing and performing may have come naturally to McCartney, but things got much more challenging when he started writing his own songs when he was thirteen years old. “I think it was called ‘Star-Crossed Lovers,’ or something ridiculous,” he says with a laugh, recalling his first songwriting attempt. “I had just seen Leonardo DiCaprio and Claire Danes in [the 1996 film] Romeo + Juliet and I remember thinking, ‘That’s so cool—I want to write a song about that.’ And it was like the worst song ever written. I remember that song being a teachable moment where it was like, ‘Okay, I’m going to have to practice this if I want people to hear my original songs.’”

After confronting that dauntingly steep learning curve himself, McCartney has words of wisdom to offer other songwriters who may be facing the same obstacle: “I think if you are just starting out, my biggest piece of advice is just to finish a song when you’ve started it. See it through to the end. Don’t hang something up because halfway through you think it’s not good enough. Maybe it won’t be, but finishing is such a huge accomplishment, and it gives you the sense of, ‘I can do this.’ Some of my best work came after I’d finished a song that I didn’t think was good enough, and I went back and rewrote it or edited it, and then it became a huge song.”

This determination to follow through on songwriting eventually resulted in significant success for McCartney. His 2004 debut album, Beautiful Soul, which was recorded when he was still in his mid-teens, has achieved platinum sales status. Now several albums into his career with New Stage, he’s continued to attain chart success for himself, as well as writing hit songs for others, such as co-writing (with OneRepublic’s Ryan Tedder) the multi-platinum single “Bleeding Love” (2007) for Leona Lewis. He’s also headlined his own tours, as well as opening for Backstreet Boys and New Kids on the Block.

Even with all that success, McCartney admits feeling a bit intimidated when he was asked to perform for a U.S. President—a feat he has done twice: first for George W. Bush, and then for Barack Obama. “I don’t care who you are and how accomplished or seasoned of a performer you are, you still get nervous in those moments,” he says. “Performing for Obama, I was ready for it, but still, seeing him sitting three arm lengths away, it was pretty wild. But he was super cool. He was smiling and dancing and having a good time. Presidents love good music, too.”

Even though he already has an accomplished career, McCartney says he intends to continue striving. “I just want to be able to look back and be fulfilled and know that I did everything I could and tried everything that I wanted to try, and have a life worth talking about later on in my older years,” he says, “and I really get so much joy out of making people happy and changing people’s mood, even for three and a half minutes. I know I’ll always be making music. I’ll never turn off the microphone. My favorite place to be is up on stage, so I don’t think I could ever give that up.” 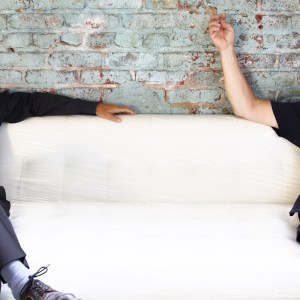