“The best album reviews tend to just come from fans,” says singer-songwriter and former journalism major Katie Herzig. The talented songstress, who migrated to Nashville from Colorado, recently wrapped up a tour with Ten out of Tenn. We asked Herzig about receiving this year’s Sammy Cahn Award from ASCAP, her new album, The Waking Sleep, and how you go about getting your songs on Grey’s Anatomy.

They were most definitely not good right away! They were cheesy. I didn’t write my first song until I was in a poetry class in college right about the time I was learning to play the guitar, so I put two and two together. It took lots of time to figure out the craft.

In the very early days of my writing I was listening to artists like Shawn Colvin, Jonatha Brooke, Ani Difranco, Toad the Wet Sprocket — those were the artists I was looking to guide me. Of course that has evolved over the years but I associate those early days with them.

You majored in journalism. What are your thoughts on music criticism and album reviews? Fair and balanced, or a lot of semi-informed fluff?

Now that I’m the one getting reviews, I see how few journalists take the time to really dig into the record they are reviewing. Yes there are a lot of semi-informed journalists out there who are probably very busy, and find it hard to find the time and care it takes to review a record. It takes time, it takes genuine interest and of course it is all subjective. So it does come down to just an opinion. But when someone comes along who really takes the time and get’s it, it’s so nice. The best album reviews tend to just come from fans.

What’s the key to getting your songs on TV shows?

It comes down to having songs that happen to work for the placement. But it’s so fluky. The first placement I had was because a guy I knew from high school worked at the show. Second one was because my song was played on KCRW and the wife of one of someone at Grey’s Anatomy heard it and shared it with the music team. But in the long run, I have worked with an incredible licensing company that has pitched my music over and over again for several years. But even with all the connections, it comes down to if the song works for the use.

How did it feel to win the Sammy Cahn award?

It is very very flattering as a songwriter. To hear the artists that have won it before and to be apart of that group is awesome. My song, “Closest I Get” is what won it, and that song to me represents patience and simplicity and honesty. Those are the things it took to write it. So it’s great to have those qualities recognized.

What’s a song on The Waking Sleep your you’re especially proud of?

“Daisies And Pews,” because it doesn’t really follow any rules. It just feels good and could go on forever in my opinion. It has an outro that I hoped would put people to sleep, as it’s the last song on the record.

From “Closest I Get”:

Not really, it has just got to feel right. If it doesn’t feel right in a song, that word can be quite a soar thumb. I do love the puzzle of finding the word that feel right. Usually it’s a simple one.

I revise a good bit. Some songs stick just as they were initially written, others need many drafts of edits.

Well this probably doesn’t count because he’s insanely successful, but Chris Martin of Coldplay comes to mind. He’s in one of the biggest bands in the world but I’ve heard him get grief for his lyrics many times. People say how does he get away with it. Because it feels good. And the words he chooses and pictures he paints mixed with those melodies are so large. I think it’s paved the way for how large they are.

First write for yourself. When you start with yourself it will translate to others.But you’ll figure out soon, how people connect with your songs.Pay attention to the ones they do and why. Songwriting is mysterious, it requires as much listening and waiting as it does doing.Embrace the miracle, mystery and simplicity of it all.

“July Flame” by Laura Veirs is up there for me. Since the first time I heard it, it spoke to me. It feels amazing and the lyrics fit so nicely with the feel. If I can listen to a song hundreds of times and still crave it, that means something. That song has become that for me. 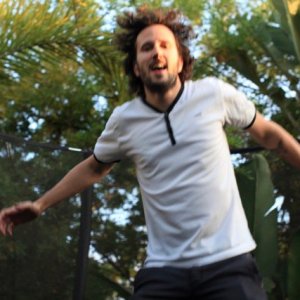