Set to drop in the spring of 2023, Letts detailed his solo debut in a recent interview with NME. A product of the pandemic, he explained how the album was born from a time not so long ago when all we were left with was our thoughts.

The album began as “a creative exercise, not a commercial one,” he explained. But it soon became so much more. There was no plan or theme going into the project, Letts said, “I just spoke my truths that seemed to be relevant to the music that was unfolding in front of me. It’s all my cultural influences unashamedly out there in one thing. It’s a product of what I am, which is Black and British. I think it’s inherently that. And it reflects the duality of my existence.”

Letts holds onto a belief that what you put out into the world needs “to justify the space it occupies. Because space is absolutely vital in the 21st century,” he explained. “So if you’re gonna put stuff out there, it needs to be a bit more than ego and make-up. But that’s me, I’m old school. I’m of the vinyl generation, where it was our lifeblood. It was about changing your mind, not changing your sneakers. And I’m stupid enough to think that music can still do that.”

The space his album will soon occupy has already been justified with the newly released single and title track, “Outta Sync.” A first taste of the record, the song is also a perfect introduction to Letts, an icon whose legend was already solidified in the background of London’s punk movement of the 1970s, behind a camera creating documentaries, or directing music videos for the Clash, the Psychedelic Furs, the Pretenders, and more.

Letts lays it all out in the opening verses: Now, because of my duality, raised on pop and bass, didn’t really bother me, ’cause it’s all about the taste / I’m the vinyl generation, and that’s how I got my start, combining clothes and music, and I turned it into art.

“It’s just me laying my cards on the table and embracing what I am, warts and all,” the artist explained. “I ain’t a 16-year-old male on the dance floor; I’m a 66-year-old man. But I am a 66-year-old man that you ain’t seen before. And that’s because of music.”

An easy reggae rhythm offers a backdrop for reflection as Letts recounts the changing musical landscape he’s witnessed firsthand throughout his career. Follow Letts on a witty, but honest journey in “Outta Sync,” below. 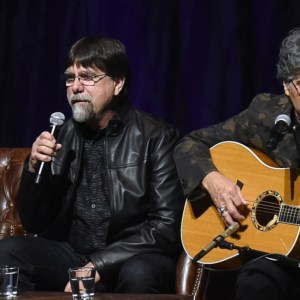