In the five years since releasing their sophomore album From the Deer Forest, MAKS the Fox kept writing and religiously practicing two hours per day. Once the pandemic hit in 2020, the Chicago-based quartet—founding members and couple vocalist and keyboardist Kori Simonson and singer and guitarist Marlon Aguilar, along with bassist and cellist Rachel Schuldt and drummer Jarod Facknitz—kept the momentum, continued to play, evolving all the songs of That We Exist.

“We definitely took our time with writing a lot of the songs,” says Simonson, who along with husband Aguilar also had their first child in 2020, of the band’s third album. “A lot of songs kind of grew out of those practices.”

On That We Exist, Aguilar stepped back from some of the songwriting, which he split with Simonson on From the Deer Forest, focusing more on his guitar work and engineering the album at the band’s home studio.

”This past year definitely helped us compress the music process,” says Aguilar. “We had this whole year of the pandemic to continue to record and write in our new studio, which was really nice for us as a band. It gave us another space to escape to when we were all just stuck at home.”

Produced by longtime collaborator Dan Duszynkski (Loma, Gold Motel), who also contributed backing vocals and keyboards on the album, That We Exist, mixed at Duszynkski’s Moon Phase Ranch in Dripping Springs, Texas, explores the realization that everything is temporary and nothing is permanent, from opening “Questions,” probing the need to move on and make changes, says Simonson, through the eruptive harmonies of “Days Are Mapped Out,” swelling around the inevitable In a single file line / Thoughts are washed out / Full sky a mile high… through countdown chant of 5-4-3-2-1.

Anchored in melodious riffs All That Exists is textured in its beguiling croons, horns and Moog synth, percolating into the lilting rhythms of title track, addressing the unrelenting passage, and shifts, of time.

“Nothing is permanent,” says Simonson. “I feel like all the songs, in some way, are tied to these sentiment.”

Aguilar jumps on vocals, steadily reflecting on infectious “Walking Down the Path” into Simonson’s drifty delivery of “Talking Under Your Breath” and the hazier hum of “Vampires.” Written by Aguilar, the couple’s dog Flyer makes a cameo bark on “Vampires,” while the whimsical rushes around the reminder of everything coming and going with “Daybreak.”

“It’s just sort of a repetitive, vinyl spinning with the needle hitting it,” says Simonson of the track. “Everything comes and goes and nothing stays. I guess that statement is a common thread through all of these songs.”

Surveying the passage of time, closing “Down Down Down“ glances at self-doubt and how easily someone can take themselves to a darker place, sincerely moving through Why can’t you see that your hearts fading / I know who you are / I know where you’ve been / I know where you go.

“Kori and I both like to write songs with more abstract lyrics,” says Aguilar. “We don’t come out and tell you exactly what the song is about. I write that way because I want the listener to construct their own meaning of the song as well.”

For Simonson, writing was always a personal affair, which unraveled over time. When she originally wrote “Questions,” Simonson never showed the lyrics to anyone. Now the main writer on That We Exist, Simonson is more confident in her words, and allowing the songs reveal themselves in real time.

“I have a lot more trust in the process, and trust in my bandmates,” says Simonson. “Now I can write a song at practice and just mumble out the words and feel it out while it’s happening versus having it completely done before I send it to anybody. A lot of the songs on this album happened at band practice, just finding the feel of the song.” 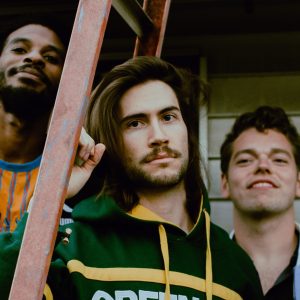 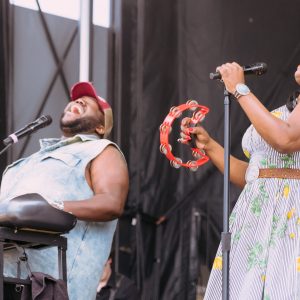