Paul Simon’s much maligned musical, The Capeman, will make it’s return to the stage at the Public Theater in New York City August 14-16. The show, which originally starred Marc Anthony, opened in 1998 to critical disdain and ticket-buyer apathy, eventually burning through five different directors. But the actual music is well worth checking out.

Jimmy Fallon’s been celebrating the upcoming reissue of the Rolling Stones’ classic Exile On Main St. all week on Late Night With Jimmy Fallon. Phish, who played Exile straight through during their most recent Halloween show, appeared last night to run through “Loving Cup.” Watch the video below. Keith Richards, who was probably “beautifully buzzed” himself, was on hand to introduce the band.

Speaking of late night talk shows, Sufjan Stevens joined the National for their David Letterman appearance last night, lending angelic backing vocals to High Violet’s “Afraid Of Everyone,” the band’s latest single. This was in spite of Stevens’ disdain for the medium.

Tom Petty’s upcoming album Mojo, his first record with the Heartbreakers in eight years, is pretty great. Check out the hair-raising riffage in the album’s first video, “I Should Have Known It,” below.

Big Star’s Alex Chilton may have passed away this year, but his memory lives on in unlikely places. Katy Perry has named her new single “California Gurls,” and that offbeat spelling is a tribute to the seminal southern power-pop band.

“My manager, Bradford, he’s from Mississippi, and he’s a huge Big Star fan,” Perry tells Entertainment Weekly. “And with the death of one of their members, I had just written that song, and he’s like, ‘Katy, just for me, will you please title it ‘California Gurls,’ with a ‘u’? People won’t even know!’ I don’t know the whole catalog of Big Star, but I did it because Bradford is one of my best friends, and I thought it was cool, and you know, the kids like those variations.” Wurd. 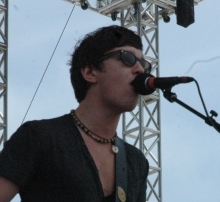