1500 grammar school kids are up in the aisles dancing and stomping their feet. When the music stops, they beg and plead for one more song, just one more song, please! The type of music that’s got them so worked up? Not hip-hop. Not rock. Why, it’s not even a little bit Top 40.

If you’re surprised by the kids’ response to music that’s older than their grandparents, maybe you shouldn’t be. Ben Jaffe sure isn’t.

“That’s what I think is so great about New Orleans music. Over all these decades, it’s still entertaining.”

Not only is Jaffe the owner of Preservation Hall, the famed jazz club, but he’s also the tuba player in the legendary house band, which has played such notable venues—grammar schools excluded—as Saturday Night Live and Carnegie Hall. Oh, and Jaffe grew up hanging around the historic venue, which isn’t surprising considering his father and mother were the ones who founded it.

So when he says that the new Preservation Hall benefit album is “spectacular,” you can probably take him at his word. “I don’t think we could’ve made a better album,” said Jaffe. “It was that way because everyone did the album for the right reasons.”

“Everyone” includes artists such as Tom Waits, Steve Earle, Louis Armstrong and Merle Haggard, who all contributed to the nineteen-track album full of jazz staples that’s being released February 16th. All the songs were recorded with the house band and at Preservation Hall, which is located right off Bourbon Street in the French Quarter. The jazz club takes a no-frills approach—there’s no dance floor or food or drink served inside—and puts the focus squarely on the music, drawing standing-room only crowds most of the nights it’s open.

However, just a few years ago, there was some doubt as to if the crowds would ever return. When Hurricane Katrina hit in August of 2005, Preservation Hall was severely damaged and stayed closed for months before its triumphant reopening on its 45th anniversary in April of 2006. When asked about what New Orleans was like post-hurricane, Jaffe says, “I had this fear of the scene coming back differently and not having the people there who gave it its color.” 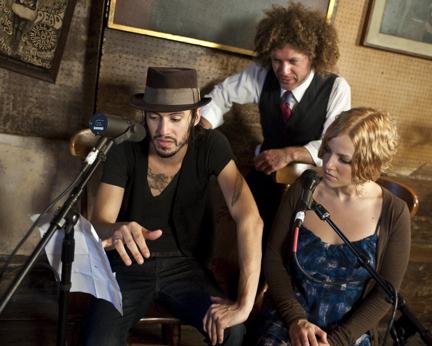 To prevent this from happening, Jaffe founded the New Orleans Musicians’ Hurricane Relief Fund—now known as Sweet Home, New Orleans—to help bring back musicians he described as “pillars of the cultural community.” Still, those efforts just weren’t enough to insure the future of New Orleans’ music. Says Jaffe, “If you were over 60, it was much more difficult to return to New Orleans than if you were younger. I was looking around and thought, ‘Oh my God. We are losing this whole generation of musicians who would normally be passing this tradition on to teenagers.’”

Jaffe’s solution? Start his own education program, in which members of the Preservation Hall Jazz Band mentor and teach young musicians. “It is a chance for us to give to the community what the community has given us,” says Jaffe. “When I started playing music in New Orleans, I learned from my parents and I learned from the people in his band. I learned music from my godfather. These older musicians taught me not just music but life lessons.”

It’s of the utmost importance to Jaffe to pass those lessons on. “It’s our mission,” says Jaffe. “It’s why we live. This is what we do. For us, this is more than just continuing a tradition. This is who we are. I wouldn’t be myself if I didn’t have New Orleans music. 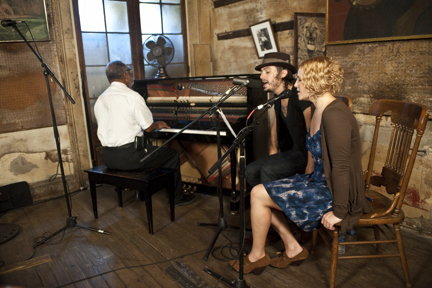 Proceeds from the benefit album will fund the Music Outreach Program and also help to ensure the future of Preservation Hall. Cory Chisel, one of the artists invited to play on the album, called the experience of recording with the Preservation Hall Jazz Band “the greatest 24 hours of my life.”

“When you first walk into [Preservation Hall], you feel like you’re in a movie set. It looks like it’s stuck in time. It’s probably the most authentic environment I’ve ever had a chance to record in,” said Chisel with awe in his voice. His track, “Some Cold Rainy Day,” was recorded in just a few takes, which is normal operating procedure for the band but took Chisel a little by surprise. “We ran the song two or three times. By the time I was feeling ‘Alright I can sing this thing,’ they were like ‘Alright, let’s go to lunch.’”

Despite the short recording session, Chisel is thrilled with the final product and has high hopes for the album, saying, “I hope this thing wins Grammies. In a world where jazz music is not as talked about as it should be, I hope this reminds people of the potency of the music.

“This is not the kind of stuff that kids are going to stumble upon looking for ring tones. It’s going to have to come to them. So I really applaud the effort to go out and fight and just not let this music be shoved on the shelf.”

Jaffe also sees the album as doing some much bigger than just raising money. “I could get in trouble for saying this but I really feel that this album is not a jazz album. It’s an American music album and it honors American music.

“The fact that Preservation Hall is a family business makes it special. You go to a city and a lot of times I look out of the hotel window and I don’t know where I am. We’ll be driving down the street and I’ll ask somebody, ‘Man if somebody plopped you down right here, right now, would you have any idea where you were?’ Unfortunately with the expansion of the world, we’ve lost some of our identity. It seems to be the more that happens, the more important and sacred places like Preservation Hall become.”

For more information on Preservation Hall and to purchase the album, go here. 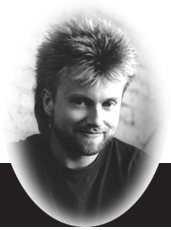