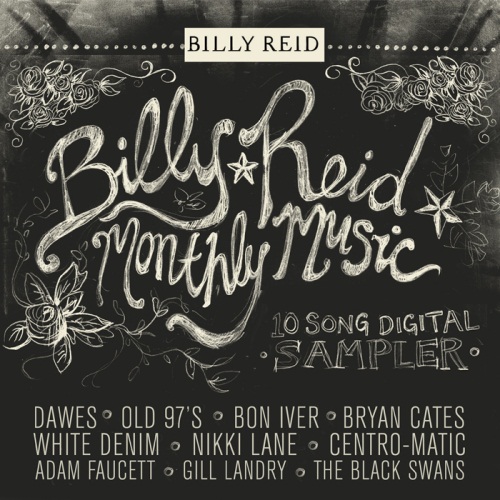 The songs are amazing on this new sampler, and best of all, it’s free to download! You can grab it by going to this URL: http://billyreid-americansongwriter.bandcamp.com/

Check out the playlist below. Track reviews by Dan Weiss.

Old 97’s have been demonstrating their kickass chops and unmatched songwriting abilities for years, so don’t fault them for settling into a groove. “Brown Haired Daughter” is classic Old 97’s: jauntiness tinged with down-on-luck doubt, with the occasional pissed-off quote. “And it’s not my fault she loves me,” Rhett Miller spits through gritted teeth.

Dawes – “Coming Back To A Man”

For an LA band, Dawes are sure developing a knack for classic Nashville wordplay quick: “The wounds are starting to heal/ Whether I want them to or not.” It’s to their credit that every melodic change on “Coming Back To A Man” matches such turns as “You still look like a Friday night.”

Justin Vernon’s come a long way since his days in the cabin murmuring about the ex; the negative space in “Michicant” is filled with bicycle bells and violins processed into whale songs. And his odd syntax on paper – “Searching for an inner clout/ May not take another bout” – makes perfect fluid sense aloud. His vowels and consonants are strictly instruments.

Long bubbling below the radar on excellent mishmash albums like 2009’s Fits with their unusual marriage of psychedelia, prog and fractured-fragment punk, songs like “Street Joy” on White Denim’s D finally settle down on one sound –a mournful, echoing folk-rock – and succeed in giving Fleet Foxes and My Morning Jacket a run for their money.

Centro-Matic – “Only In My Double Mind”

Will Johnson’s low-maintenance indie-rock tunes sound like they could coalesce into anthems if they could only get themselves off the couch. The spacious whomp of “Only In My Double Mind” houses echoing vocal dubs and a coda of slow-destruction guitar feedback, but prop it upright and it’s a murmured melody worthy of The National on a country day.

Adam Faucett has been touring constantly throughout the United States since the release of his third album, More Like a Temple. The singer-songwriter says the new effort is “thicker” and “more soulful” than anything he has previously recorded. We agree.

A member of Old Crow Medicine Show, Landry’s new solo album is a valentine to New Orleans, the city where he cut his teeth as a busker for years. “Never Coming Here Again” is a Dylanesque romp that wanders through the seedier locales of the Crescent City.

“What once makes us happy, now makes us sad,” frontman Jerry DeCicca sings on the song’s opening verse, perhaps a reference to the 2008 death of the band’s violinist Noel Sayre. The words then take an existential turn: “Don’t blame the stars for what we can fix with our hands” goes the song’s easy chorus.