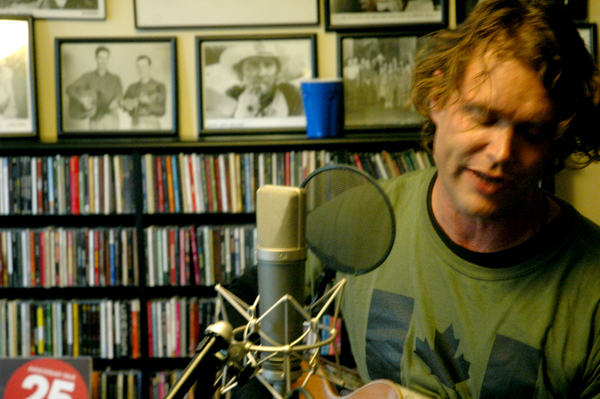 Corb Lund recently stopped by the American Songwriter offices in Nashville and played some of his Canadian country tunes for us, and shared stories on life in Alberta and what inspires his songwriting. At the end of the interview, stream the tracks that were recorded in our office and check out a short video of the song “Devil’s Best Dress.”

We were talking about “Time to Switch to Whiskey.” Where was that recorded live?

Yeah. Thredbo, Australia, which is sort of north of Sydney in the Snowy Mountains. There was a big country festival. Actually, we played right before Taylor Swift, strangely… she’s a huge star so obviously they liked her more [laughs]. We’ve been going to Australia for six or seven years, so they like us. Canada and Australia are weird because we’ve crossed into mainstream country there, which will probably never happen here. Somehow, they like playing us on CMT and equally on the indie college stations and on country stations, which is a cool place to be if you can pull it off. It’s a tenuous balance but they seem to like it.

“Horse Soldier, Horse Soldier” was a mouthful. You said you had to get that out of your system. What went into recording long songs like that?

Yeah, a little research required for that one. I just read a lot. I don’t have any military people in the family, but I’m just a [history] buff. There were three or four things, couple of civil war histories, and then I started reading the part about the Saracen. They were the Muslims who fought against the crusaders in the Middle Ages and that kind of stuff… this and that. I didn’t fit all the verses in. There’s like some Canadian verses, too, one about the Mounties because four of our Mounties got shot a couple years ago. I don’t know if you remember that, but it was on the news. There’s a verse about that and then there’s a pretty good verse about how the British Canadians burned down the White House in 1812. I left that verse out… It’s funny because you start writing those kinds of songs and then the dudes, the older guys with the beards and the suspenders, start coming up to you and asking all the questions. It’s got to be exactly right if you’re going to do that…“By the way, it was 1863 when they switched from the brass saddle ring to the steel saddle ring, although some Units kept it because they preferred it at night.” [Laughing]

So, are you reading historical non-fiction while you’re on the road?

Not always, but I dig that stuff. It’s kind of nerdy, but I dig it. My brain automatically views current events through a historical sort of lens. That was my major in school.

Have you talked to any other songwriters about history? I’m thinking about someone in particular [New West artist and Civil War buff Steve Earle]...

No, I haven’t had a chance to… one of these days. We’re pretty new, so… yeah, Johnny Horton writes a lot of that stuff, he used to. There’s some Marty Robbins songs with the Alamo and stuff like that. There’s a really good one by Al Stewart about the Mounties trying to take Moscow. It’s called “Roads to Moscow.” It’s really good. I’ve always been a sucker for those kinds of songs that make you interested enough that you go and research what the songs about. And now with Google, there’s no excuse.

So you’re into Marty Robbins?

Yeah, sure, I was just saying in an interview earlier today that that pink record, the Gunfighter Ballads record is my favorite record of all time. We recorded in his old studio. It’s called Omni, down the road. I didn’t know it was his but apparently it was his once. And we even tried to be the ultra cool guys and get the brothers, his backup singers. One of the guys was on The Outlaws record. It’ll come to me. But one of them is still living, like from his classic backup group, so we tried to get one of them to sing. But he was ill, so we had to fake it. My grandpas were cowboys and my great-grandpas, too, and they used to sing three or four [songs from Gunfighter Ballads & Trail Songs], and before I heard the Marty Robbins versions, I heard my grandpa’s versions. And they weren’t singers they were just still catching the songs from the era when those kinds of songs were old history.

Because about half of the songs on that album are not originals?

And he writes a lot of other stuff on that record, he writes them in that way.

But you’ve got to hand it to him, because you can’t tell which are which, right? But it’s neat because those songs are so old, from before there was a recording industry and a career, people, especially folk people and working people used to sing those songs for old histories, right? So, it was a different function. It wasn’t a career. It was just something to do for fun and to transmit history.

Where are you mostly pulling ideas like for songs like “Roughest Neck Around” and “Long Gone to Saskatchewan?”

Oh, that’s mostly personal stuff. Some of my songs are just stuff that I’m into, but probably 80 percent of what I write is about family stuff and personal ancestry stuff. I’ve got a rose gallery of ancestors to write about. There are always one or two people in the family that are like the historians of the family. I’m probably the new one, but there are a couple of aunts on either side that I was pumped for information when we were having Christmas or whatever.

Do you find yourself at the dinner table absorbing names and stories?

Not only absorbing, but actively digging stuff out. I’ve even gone to the extent of sitting down and taking it all down. I’m lucky because I’ve got one aunt on my dad’s side that’s got exhaustive notes and that’s pretty cool. Part of that’s the Mormon thing because they have this weird old belief thing where since it was their story that God’s word or whatever was rediscovered in 1830 by Joseph Smith. So there are a whole lot of people that, in theory, didn’t get the word, like their ancestors. So they believe that they have to get baptized for all of their ancestors so they’ll be in heaven or something like that, so as a result their super into genealogy, which is sort of a cool thing as a byproduct. They have probably the most complete genealogical records of anybody. The temple in Salt Lake has exhaustive genealogical records.

So tell us about the area you’re from in Canada.

Alberta. It’s right north of Montana. Culturally, it’s a lot like Montana. We’ve got the same population as greater Los Angeles and it’s the second greatest land mass country in the world, so it’s very sparse…. There’s a lot of oil there, a lot of gas and stuff, and there’s starting to be tension between some of the old time rancher land-owner guys and the oil guys. And they tend to be pretty conservative in their politics, usually, but it’s getting to the point where they’re becoming split because they’re really digging up everything, because the economy’s so hot. That’s happening all around me. Like, my buddies all buy land in Saskatchewan, and my mom is actually part of a landowner’s group in where we’re from in the Southwest corner of the province trying to slow down all of the gas stuff. So, it’s all pretty close to home.

It’s tricky because half my demographic at home is guys that work in the oil patch. I’ve got an old tune called the “Roughest Neck Around” that’s about the oil guys, but it’s like, you have to make a distinction between the war and the troops because it’s not the guy who’s driving the truck who’s fault it is, it’s just the overall policy and corporate stuff.

There’s a far away place where all your dreams come true, it’s called Saskatchewan! Well, because what I was saying with all the oil stuff in Alberta, the thing is that a whole bunch of the guys who have been ranching in Alberta for years and years can’t afford it anymore because the land’s worth too much for recreational property and the economy’s really hot so they’re selling their place in the foothills, which is really pretty, and buying a place that’s way bigger in Saskatchewan, which isn’t as pretty but it’s good for cattle. Actually that’s not true, it’s just as pretty. It’s just a subtle beauty.

I was telling this joke… These two guys are in a bar and the deep south in a roadhouse, Billy Bob and Jerry Jeff, and these other guys come in the other end of the bar and sit down to have a beer. And Billy Bob says, “Jerry Jeff, those boys don’t look like they’re from around here. Why don’t you go find out where they’re from?”

Jerry Jeff says OK and goes to the end of the bar and says, “You boys don’t look like you’re from around here at all, where are you from?”

Jerry Jeff walks back, sits down at the bar. Billy Bob says, “Jerry Jeff where are they from?”

These tracks were recorded for American Songwriter by Kyle Byrd in September 2009.

Three microphones were used during this session. The Neumann TLM 67 was placed on the vocal with a cardioid pattern. A Blue Microphones Bottle Rocket Stage 1 with a B-8 large diaphragm cardioid capsule was used on the acoustic guitar. This mic was positioned right where the neck meets the body of the guitar, about 18 inches away for a balanced perspective of the guitar. Lastly, a Mojave Audio 201-fet was used as an overhead. The mic was placed about 6 feet high and pointed straight down over Corb Lund’s left shoulder. This position is used sometimes to capture the artist’s perspective. 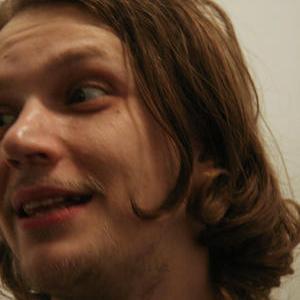 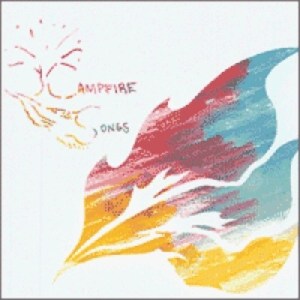