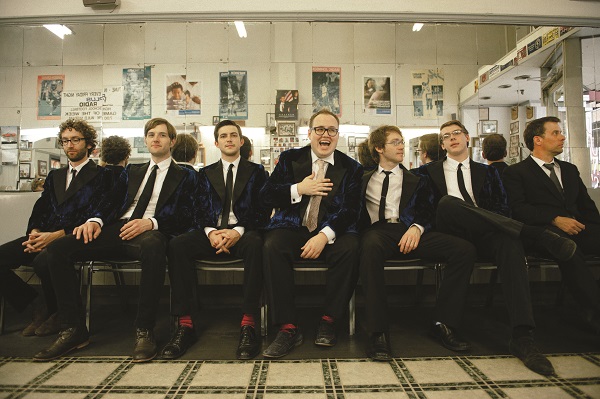 The night outside is bitter cold, but the heat from about 400 bodies has fogged the windows of Nashville’s Mercy Lounge. In a time-honored tradition of soul showmanship, The Broken Bones from Birmingham, Alabama play their singer to the mic. “St. Paul” Janeway shields his eyes and squints behind thick glasses, quickly sizing up the crowd. The whole band wear suits, shedding their jackets under the hot lights; with respect to role models like James Brown and James Carr, Paul keeps his on. He straightens his bowtie, counts the grace notes, and begins to testify.

A few hours earlier, the band lounged backstage, resting up for the last show of their longest tour yet. The journey took them across the Deep South, up the East coast, and into Canada and the Midwest inside 30 days. “It was really a make-or-break kind of thing,” says guitarist Browan Lollar, perched on a tall stool. “We didn’t kill each other; everybody still gets along.” “The night’s still young,” Janeway deadpans, and everyone laughs. “What’s been really spectacular to me is that we don’t even have a full-length album out yet. But we’re touring around, and there are people in the rooms. That feels fairly special.”

His sentiment isn’t feigned modesty. In the fall of 2012, St. Paul and the Broken Bones were wrangling time in their work schedules to hustle from bar to bar under their own steam. Then, Thirty Tigers’ Traci Thomas saw a clip from their performance at the weekly showcase Music City Roots, and reached out to Lollar, whom she recognized from his stint with one of her clients, Jason Isbell and The 400 Unit. Once the decision to work with her was ratified, the pace increased dramatically for The Broken Bones; though their own application was denied, Thomas squeezed the band onto bills at SXSW just weeks before the festival.

Also rejected was Janeway’s request for time off from work, leaving him with an ultimatum: give up a secure job with a bank, or lose his shot at a future in music, possibly the best he would ever get. The choice was clear, and he has no regrets. “I feel like that’s the best decision I’ve made,” he says without hesitation.

The group’s substantial progress bears him out. Without a P.R. push, or even a web presence outside Facebook, passionate word-of-mouth evangelism is building excitement for Half The City, their debut long-player, due February 18. Their label, Single Lock Records, is a joint venture of Will Trapp, The Civil Wars’ John Paul White, and The Alabama Shakes’ Ben Tanner, an old friend of Lollar’s who also produced the album.

Half The City is a delicate balancing act, combining warmth with high fidelity, sprinkling classic gospel-inflected soul playing with complex jazz progressions, and accenting the water-tight rhythm section at just the right moments with Lollar’s biting rock guitar licks. The songs also reflect a balance in soul music’s facility for making sense of pain and celebrating joy. Centerpiece “Broken Bones And Pocket Change” is a devastating breakup story in which music itself lets the singer down; it sits effortlessly next to raucous new-love tune “Sugar Dyed.” Restrained opener “I’m Torn Up” lays out the complexities of a love triangle from one corner, while the title track’s speaker finds hope in the tears he cries over his hometown.

Without a doubt, the driving force behind the whole package is Janeway’s soul-searing delivery, which is at the core of the band’s every creative choice. While public reaction to the Alabama Shakes bolstered the Broken Bones’ confidence in their work, trends were not foremost in their minds when developing their sound. “We wanted to frame Paul’s voice in the way it needed to be presented,” explains bassist Jesse Phillips, who has played with Janeway in different bands for over half a decade. “It’s pretty bare-bones, it’s all out there. The way that Paul sings is the way that Paul sings.”

One way or another, Janeway has been moving in this direction since childhood – sermonizing in the Church of God, learning by observation how to read a crowd, and falling in love with performing. Later came a fixation on gospel and soul vocalists. “Soul, more than any other genre, is about feel. You have to feel it,” he explains. “If you don’t, I don’t give a shit what you’re playing, how good of a musician you are – if you don’t feel it, it just sounds like smooth jazz.”

The spontaneity of live performance became another key ingredient to Half The City. “There was a moment there where we were listening to the roughs, and we thought about going back and fixing a few things,” says Lollar, turning to Janeway. “You did like, one overdub, and we all looked at each other like ‘This is just not going to work.’” Janeway agrees. “I went in there and it was like ‘no.’ [You] captured a moment – you can’t just throw something else in there.”

On the stage at Mercy Lounge, Janeway wipes his face and nods to Lollar. The band catapults into Otis Redding’s “Try A Little Tenderness” to wrap their encore. Even after a month of living cheek by jowl in a van, they can’t get enough, stretching the song through two false endings. Janeway pretends to walk away, but then runs back to the mic, belting with holy fervor, grinning in ecstasy. They’ve captured their moment for tonight.

This article appears in the March/April issue. 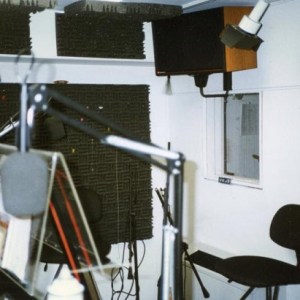 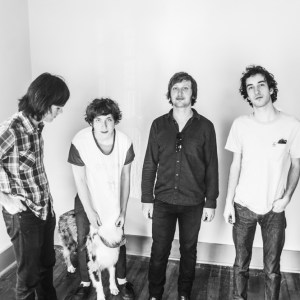